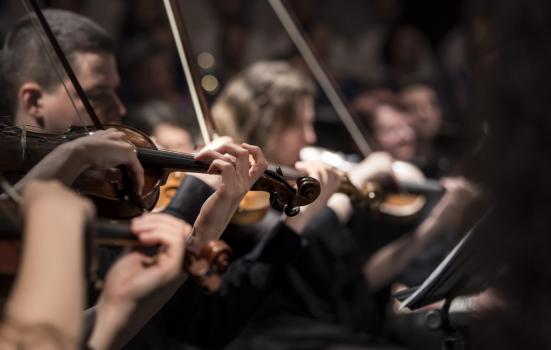 Funding for higher education in the arts will be halved because the Government does not consider it a "strategic priority".

Creative and performing arts, media studies and archaeology will lose £17m in 2021/22 - a reduction of 49% - under a proposal from Education Secretary Gavin Williamson to cut support for these high-cost subjects while increasing funding for courses like nursing and computing.

With targeted allocations for London-based students also due to be withdrawn, major conservatoires and arts universities face course funding cuts of more than 70%.

The Musicians' Union has expressed "horror" at the plan and is urging people to respond to a consultation, which closes May 6.

The union said notice of the change, first given on March 26, comes too close to the start of the academic year in September and will affect universities' and conservatoires' world-leading status in music provision.

"The proposed funding cut will be catastrophic for music provision at higher education level, affecting our members’ work, the financial viability of music courses, and training for the next generation of musicians and music professionals."

Public Campaign for the Arts called the plan "an attack on the future of UK arts, the creative potential of the next generation, and the people who deliver our world-leading arts courses".

"Rather than devaluing the arts in this way, the Government should maintain its important investment in creative skills, ensuring that arts courses are widely accessible and properly supported."

But the Office for Students (OfS), which is running the consultation, says a growth in student numbers means hard choices: simply maintaining the overall funding rate in 2021/22 would cost an extra £53m.

"When funding is significantly constrained, we believe it right that the grant for these subjects is reduced in order to prioritise other subjects."

The proposal would cut millions of pounds out of specialist arts education.

The Theatre and Performance Research Association said removing funding from the arts is "a blunt approach to the funding challenge" the Government faces and is "narrow sighted in the extreme".

"Halving the funding for even programmes which are in the lowest price allocation will inevitably lead to closures."

The OfS consultation says: "We recognise that some providers may be particularly adversely affected by the proposed removal of London weighting and reduction to funding for subjects in the performing and creative arts, media studies and archaeology."

"However, these proposed changes... are designed to protect funding for high-cost and strategically important subjects... as well as to recognise the distinctive contribution that specialist providers make to the provision of higher education."

An additional £10m has been made available for specialist providers including most drama and music conservatoires, although this won't make up for the overall funding cuts.

Despite designating these subjects as a lower priority, OfS notes their "huge benefit to our society and culture".

Design and creative and performing arts make a "particularly important contribution to access and participation," the authority says.

Drake Music said the proposed cuts would disproportionately affect disabled people. The organisation works towards equality and inclusion in music: "We are concerned by any financial changes in funding that makes this critical aim even harder to achieve."

"Disabled people are already under-represented in the workforce; another barrier to education will compound that further."

Arts graduates also play a crucial role in the UK's economy - artists, dancers, producers, directors, arts officers and some musicians and choreographers are on the official list of occupations in shortage, the consultation document says.

"They are, however, also expensive for the government to subsidise, [and] the government does not consider them to be as strategically important as other high-cost disciplines."