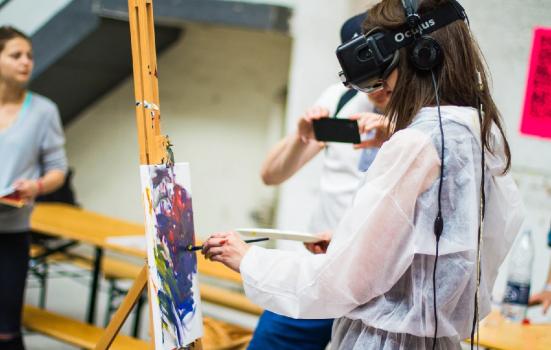 Funding cuts could drive a wedge into growing collaborations between the arts and STEM sectors, critics say
Photo:

A who’s who list of leaders from England’s arts organisations has joined forces with the country’s leading arts schools to oppose cuts in subsidies for arts subjects in higher education.

A consultation on the little-known plan closed last week, provoking a brief flurry of outrage.

“If you believe that innovation is a strategic priority, you will not cut higher education funding to the arts," the open letter reads, arguing these subjects must be recognised as "integral to the Fourth Industrial Revolution”.

Among the many art school leaders joining the campaign are Kieren Reed at UCL's Slade School of Fine Art, Laura Sillars, Dean of MIMA School of Art and Design, and Professor Jeremy Till, Head of Central Saint Martins and Pro Vice-Chancellor of University of the Arts London.

They are supported by senior arts professionals across the country, from Cultivator in Cornwall to BALTIC in Gateshead.

Tate Director Maria Balshaw, together with the directors of Tate Britain, Tate Modern, Tate Liverpool and Tate St Ives, have put their names to the letter though the heads of other DCMS-sponsored museums and galleries such as the National Gallery and National Portrait Gallery are absent.

Institutions are estimated to lose an average of £121.40 per student under the proposed formula.

Arts courses in London would suffer the most, losing their London weighting on top of the grant cuts.

The VAA says fewer art courses could be offered, making access to places more limited. Vanessa Wilson, CEO of the University Alliance, said the cuts represent "the thin end of a dangerous wedge, with further cuts and subject incentivisation coming down the line".

She fears future funding will be diverted through small and specialist institutions at the expense of technical professional universities like those within the Alliance.

Protecting creative education pathways across the whole of the higher education system benefits not only creative industries, Wilson said, but also helps to drive wider economic growth and innovation. Cutting funding would be “counter-productive and contradictory”.

“This would not only reduce the technical and interdisciplinary provision on offer... but could result in provision being heavily concentrated at specialist institutions predominantly in London and in the South East, and at institutions which typically attract students from more advantaged socio-economic backgrounds.

"This is completely contrary to the Government’s levelling up agenda.”

Also concerned about this, Evelyn Wilson, Co-Director of the National Centre for Academic and Cultural Exchange, commented on the potential impact on partnerships between universities, local authorities and the private sector.

"Such work is key to our post-pandemic futures and it runs to the heart of the whole levelling up agenda.

The open letter says cutting funding for arts education is contrary to DCMS’s own campaign #HereForCulture, which states “in these challenging times, it’s our turn to show our support for culture".

Describing the proposal as a “strategic misstep”, the letter emphasises the role of arts education to long-term cultural infrastructure and national wellbeing, as well as developing high-level creative skills, complex problem solving and critical thinking – areas identified by the World Economic Forum identified as the top three skills for future jobs.

The creative sector contributed  £116bn in GVA in 2019 and supported one in every 16 jobs, the letter notes.

"Universities have a fundamental role in energising cities and towns through complex relationships with communities, businesses, R&D, innovation and strategic partnerships with arts and culture."

The signatories fear the funding cuts will drive a wedge between priority STEM subjects and the arts.

One commented that the proposal “not only undermines the arts, it divides our subjects and limits interdisciplinary practice with science, technology and engineering, when we have been strategically aligning what we do".

Several faculty members at the Royal College of Art, which has extensive links with industry, signed the letter. The college recently partnered with British Airways to explore the next 100 years of aviation, and how technological and scientific developments such as artificial intelligence and nano technology affect customer experiences of global travel.

Collaborations between the arts and science have been particularly high profile during the pandemic, including English National Opera and Imperial College Healthcare NHS Trust's partnership using singing to rehabilitate Covid-19 survivors.

The open letter is part of CVAN’s ongoing #ArtIsEssential campaign to demonstrate visual arts' value to the economic, cultural and mental health of the nation.

The campaign aims to generate support and visibility for the industry ahead of the Government’s three-year Comprehensive Spending Review this autumn.

The next phase of the campaign is a digital march on social media on 10 June. Organisers hope placards bearing messages to the Government will raise the visibility of the arts as a connected network across the UK.