A three-year research project aims to improve diversity in classical music, where women remain underrepresented in top roles and 95% of orchestral musicians are white. 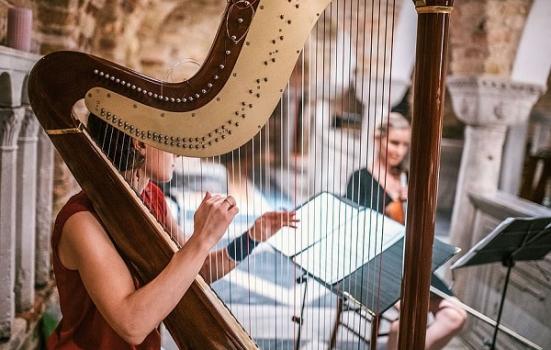 Women are more likely to play the harp than men, international evidence suggests

People from lower socioeconomic backgrounds struggle to access opportunities that lead to a career in classical music, a survey has revealed.

About 80% of England's classical musicians grew up in more affluent parts of the country, have parents who attended university and were more likely to pursue university study themselves, according to Arts Council England's (ACE) Creating a More Inclusive Classical Music report.

Conducted last year, the survey's findings will come as little surprise to the sector: concerns that classical music has become "a middle class thing" have long been raised, but an increasingly diverse cohort of music students aren't always entering the workforce.

"As the training stages progress, the overall intake becomes less diverse," the survey of 967 people found.

"There is evidence that for some young people – irrespective of their interest in, and enthusiasm for, involvement in classical music – practical barriers to participation exist."

Between 94% and 97% of orchestral musicians were white. Though female instrumentalists outnumber males among younger learners, men make up the majority of the workforce, hold most senior roles, were more likely to win elite training opportunities, and are paid more.

ACE is pursing a three-year research programme to better understand children's experience of classical music and test initiatives to diversify the talent pipeline, starting in the Midlands.

Orchestras Live will be a partner on the project, creating a framework for the industry "so that people from all backgrounds know that it holds a place for them", Chief Executive Sarah Derbyshire said.

"Through our own work to embed inclusive practice with orchestras, Music Education Hubs, youth and community initiatives and out of school settings, we know that there is a long way to go but a body of support to promote change."

Instruments like violin, piano and cello are seen as more "prestigious" because of their potential for a solo career and may be more appealing to affluent families, the research suggests.

Class and gender affect how musicians value traditional ideas of prestige, though these perceptions can change over time.

ACE's survey found significant barriers for women entering the orchestral profession. Men's higher acceptance rates to conservatoires and other training "suggest that male and female musicians do not necessarily move through the ‘pipeline’ in the same way".

A quarter of women surveyed said they faced financial barriers including low salaries and unpaid internships compared to 15% of men. They were no more likely to prioritise caring responsibilities around their career; however, 10% said parental duties were a barrier - just 1% of men said the same.

"Overall, this highlights the complexity of the notion of a pipeline," the study notes.

"There are questions not only of who comes into the pipeline at the beginning, and who progresses and is able to access training opportunities, but also the span of a professional career to take into account when considering what the possible speed of changing demography might be."

A Westminster forum on music education last week illuminated a debate over what changes will help engage children.

University of Huddersfield's Jayne Price argued for a broader focus to meet pupils' interests, saying there is a "disconnect" between their experience inside and outside of school.

"Whole genres of music are not legitimised within the curriculum and that affects how pupils engage with music later on," she said.

"Those pupils are not part of their ensembles in school... and they see music education going forward as not for them."

"Pupils don't know what they don't know," he added.

ACE omitted parts of its survey because they appeared to overrepresent diversity in the classical music sector.

It acknowledged gaps in information on the classical music workforce. For example, there is no long term data on Black instrumental learners and musicians in Britain.

Available evidence shows just 2% of musicians in ACE-funded and BBC orchestras have a disability - well below the 19% rate for England's working age population. The disability status of 75% of National Portfolio Organisations' artistic workforce is not known, suggesting a lack of disclosure.

Whilst there is some evidence diversity of educational background is increasing, "data is quite limited and changes over time to the education system make any trends difficult to discern".