Arts sector fears being too poor to refuse ‘unethical’ donations

New research by AP reveals that few arts organisations have an ethical fundraising policy, although most think they are vulnerable to reputational damage. 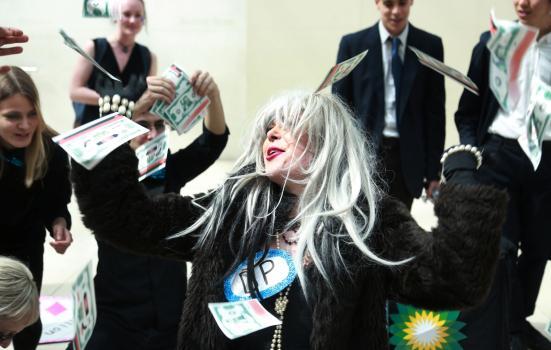 A protest by campaign group BP or not BP? at the British Museum
Photo:

Arts organisations are worried that they may have no choice but to accept sponsorship and donations from unethical sources because they are under so much financial pressure, new research by AP reveals.

Although the vast majority are concerned that taking the ‘wrong’ sort of money could damage their reputation, just one in four report that their organisation has any sort of ethical fundraising policy.

The findings emerge out of a survey of over 500 arts workers who shared their views on ethical fundraising and sponsorship. Their comments also reveal why organisations do or do not have a policy in place, and how useful they consider such policies to be.

Commenting on the findings, AP Editor Frances Richens said: “While there is a clear imperative for arts organisations to weigh up the risks and rewards before accepting a sponsorship deal or major gift, the findings of this survey reveal there is a split in opinion about what motive should underline this decision-making process.

“Should they take the opportunity to ‘turn bad money into good’ so long as it doesn’t cause reputational damage or impede the delivery of their goals? Or do arts organisations, particularly charities, have a fundamental duty to work for the public good?”

The revelations follow a wave of sponsorship headlines in recent years, including the recent withdrawal of arms dealer BAE Systems as a key partner of the upcoming Great Exhibition of the North and sustained criticism for continued links between oil giant BP and leading cultural institutions.

Concerns about the risks of receiving donations from unethical sources are widespread in the arts sector. Most survey respondents agreed arts organisations should consider refusing support from sponsors associated with political activities or a negative impact on the environment, and 73% said their organisation is vulnerable to reputational damage through their connections with sponsors. Similarly, 54% said they were worried about accepting money from an inappropriate sponsor or donor due to financial pressure.

But just 27% said their organisation currently has an ethical fundraising policy. The most common reason given for this was that the organisation would like to make decisions on an ad hoc basis, while over a quarter said they didn’t attract sufficient levels of sponsorship to warrant a policy. 16% said they had never considered a policy.

Of those with an ethical fundraising policy, most said these indicate the type of sponsor activities that would be inappropriate, and are used as a basis for assessing the suitability of sponsorship opportunities. They also provide helpful justification for the refusal of support by a potential sponsor.

Responding to the survey findings, Chris Garrard, Co-director of Culture Unstained, stressed that sponsorship deals are “not made in an ethical vaccum” and arts organisations regularly take positions based on their values.

“Sponsorship relationships can be positive,” he added. “Identifying a relevant and ethical partner can create new opportunities for collaboration and provide a much-needed source of additional revenue.

“But a partnership with an unethical company can cause a carefully crafted event or exhibition to become mired in controversy or appropriated for a cynical corporate agenda.”

But Michelle Wright, Programme Director of the Arts Fundraising & Philanthropy Programme, sees grey areas. Writing for AP, she raised concerns: “…we may be in danger of making the arts unfundable. Not only are we putting the arts on the ‘too difficult’ to support pile – but we’re also at risk of a few loud voices setting our policies, or being influenced by journalists keen for a story.”

Pulse report: Ethics in arts sponsorship
Whose ethics are they anyway?
How bad is bad?
No room for neutrals