GCSE pupils are choosing not to study art and design becasue of government messaging around the EBacc, a survey of Norfolk schools has suggested. 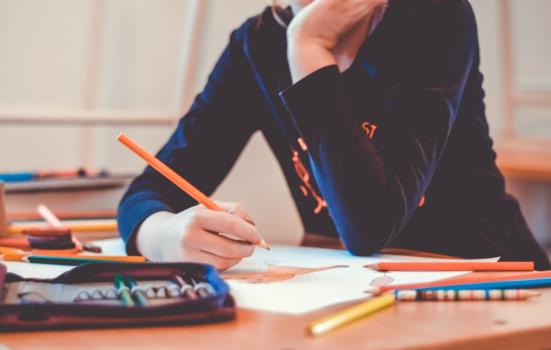 An academic paper has called on Government to offer creative subjects “parity of esteem” with STEM subjects (Science, Technology, Engineering and Mathematics).

Research by Norwich University of the Arts (NUA) suggests the exclusion of the arts from the English Baccalaureate (EBacc) schools’ performance measure is leading to lower pupil attainment, less funding and teacher recruitment challenges.

The paper’s author, Professor John Last, Vice-Chancellor of NUA, said: “The introduction of the English Baccalaureate in 2010 set us on a path where creativity falls outside the ‘core’ of our children’s education.

“The consequences of this downgrading of creative subjects are already being felt – in the choices pupils make about their GCSE options, in the practical creative skills they develop during their education and in the difficult decisions headteachers are making about funding and resources.”

Last is calling for the studying of ‘ADaM’ – Art, Design and Media – to be supported in the same way as STEM subjects.

His paper, published by the Higher Education Policy Institute, draws on conversations with professionals in education and the arts, as well as focus groups and a survey that collected responses from 31 state secondary schools in Norfolk.

The responses raise concerns about the falling status of art and design in schools following the introduction of the EBacc – a suite of seven or eight GCSEs that does not include the arts, which 90% of pupils will be expected to study by 2025.

57% of responding Norfolk schools reported a drop in the uptake of art and design at GCSE, reflecting newly released data by the Joint Council for Qualifications. “These probably reflect a worrying decline across the country for creative arts subjects, with significant implications for the creative economy,” Last wrote.

In the years leading up to GCSE, more than a third of schools surveyed were reducing time allocated to art and design subjects, and almost half were starting pupils on their GCSE courses a year early – when they are 13 years old – meaning students not studying art and design at GCSE were missing out on a year of study.

Last connects this to a decline in staffing for art and design subjects – reported by 40% of respondents – and teaching hours, and difficulties recruiting specialist staff. In one school a non-specialist teacher was teaching A-level Art and Design along with other subjects.

When asked what influences pupils’ choice of what to study at GCSE, more than three-quarters of respondents pointed to “parents’ or carers’ perceptions of subjects” and “public perception of EBacc subjects or government messages”.

“Forget the Westminster bubble,” Last wrote, “what ministers say and how they say it – and how it is replayed in the media – matters to parents, carers and consequently pupils.”

Most respondents (73%) also raised the issue of a decline in “creative stamina and resilience”, with students expecting to be less creative and ambitious and more focused on ‘getting the grade’.

Last is critical of education policies’ focus on literacy and numeracy at the expense of creativity. “There is a flaw in the logic that says to count is to be economically productive, but to create is not,” he wrote.

“To ignore the economic value of the arts and creative industries is to ignore an £84 billion annual contribution to the UK economy, 1.7 million British jobs, and a 9% share of the UK’s export market.”