The number of students taking EBacc subjects at GCSE has risen by 8%. 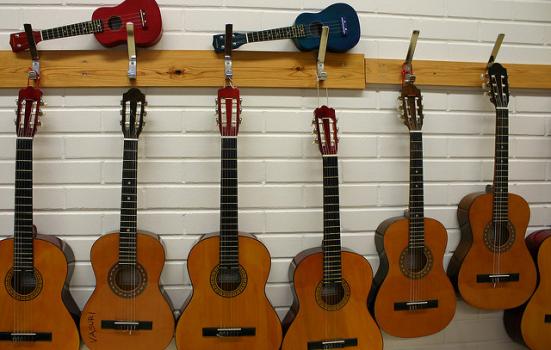 Official results for 2017 show the number of students sitting arts and creative subjects at GCSE across England fell by 44,000 (8.4%), while entries into EBacc subjects – a suite of subjects which includes a history or geography but excludes arts subjects – increased by 8.4%.

The continued decline comes despite an overall growth in the number of entries across England, with the cohort increasing by 176,000, or by just under 4%.

Commenting on the results, Samantha Cairns, Co-Director of the Cultural Learning Alliance, said: “We continue to be alarmed about the increasing falls in arts GCSE entries.

“Our fast-growing creative industries need a diverse talent pipeline. If children do not study arts subjects at school past the age of 12 or 13 when they make their GCSE choices they narrow their opportunities.”

The other results were:

Although entries into some EBacc subjects have fallen, including German (-12.6%) and French (-10%), absolute entries increased by 296,000. Much of the growth took place in English Language and English Literature, which grew by 760,000 entries (48.1%) and 574,000 entries (38.6%) respectively, although JCQ confirmed resit requirements have seen an increase in the number of people over 16 taking exams in these subjects.

The results confirm GCSE entry figures released earlier this year by regulatory authority Ofqual, which found a 46,000 decline in entries to arts subjects at GCSE. They also follow the release of A level results last week, which found a 2% drop in the number of pupils sitting arts and creative subjects at A level, and potential for a bigger drop next year.

The results come amid changes to the way GCSE grades are calculated, moving from an A-G grading system to a “more challenging” nine-point scale.

“The reformed GCSEs have been developed to meet the requirements of Government and the regulator, who wanted more challenging qualifications that enable the better differentiation of students at the top grades,” JCQ writes.

Critics are concerned that increased curriculum time and resources are being devoted to subjects that are included in the EBacc performance measure, and this will continue as the courses become more demanding.

Cairns added: “Our members tell us the accountability system in schools, much of which rests on the English Baccalaureate, is pushing them to limit the number of arts subjects offered and to steer children to take just EBacc subjects.

“The funding crisis is further compounding the problem. Schools are having to make choices about the range of subjects they can afford to offer and those that do not specifically count in school league tables are losing out.”

A Creative Federation spokesperson said: "The creative industries are the fastest growing sector of the UK economy but without the right pipeline of talent, this continued success is not guaranteed.

"The persistent sidelining of creative subjects and the rollout of the EBacc will make current skills shortages in the creative sector worse. That is why the drop in the take up of arts subjects at GCSE and A-level revealed this week is both alarming and predictable.

"The Federation will continue to work with government on behalf of the entire sector to show why it is vital creative subjects are taught alongside STEM and other academic subjects."