In its long-overdue response to a public consultation on the implementation of the EBacc, the Government has ignored calls for a broader, more balanced curriculum and upped the pressure on mainstream schools to enter more pupils for the prescribed suite of GCSEs. 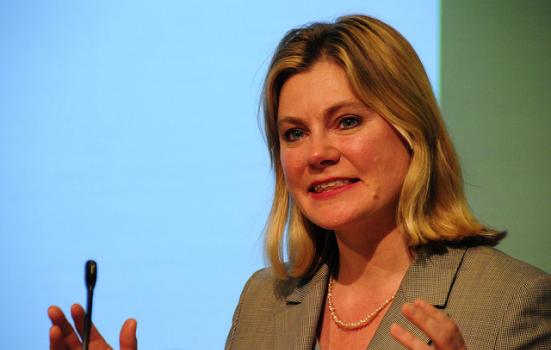 Education Secretary Justine Greening said the EBacc is right for most pupils
Photo:

The Government has renewed its commitment to the English Baccalaureate (EBacc), warning schools that it will be monitoring EBacc entry and achievement rates, and “may take further steps to ensure that good progress is being made” towards its new goal of 75% of year 10 pupils studying EBacc subjects by 2020.

It has also announced that the way the take-up of EBacc subjects is measured in schools will change, putting more pressure on them to enter less academically able students for the prescribed suite of subjects, which includes maths, English, a foreign language, sciences and a humanity, but excludes all arts subjects.

Writing in the foreword of the Government response to a consultation on implementing the EBacc, Education Secretary Justine Greening said: “I am in no doubt that studying the EBacc subjects up to the age of 16 is right for most pupils.”

She continued: “I am committed to unlocking the potential of all pupils regardless of their background and this is why, as set out in our 2017 manifesto, I would like to see 90% of pupils starting to study GCSEs in the EBacc combination of subjects in 2025.” This measure will not, however, be applied to studio schools, further education colleges and University Technical Colleges, special schools and alternative provision.

Although schools will still have the freedom to allow pupils to make their own GCSE choices, systems are being put in place to discourage them from allowing students to avoid any EBacc subjects.

Until now, school league tables have reflected the proportion of pupils in a school achieving a pass grade in the EBacc subjects. But from 2018, a school’s EBacc average GCSE point score will be published instead, to “ensure the achievements of all pupils are recognised, not just those at particular grade boundaries,” and encourage schools to enter all pupils for all the EBacc subjects, rather than just those it thinks are most likely to achieve pass grades.

Schools watchdog Ofsted will be issuing “a note to clarify how the inspection of provision at key stages 3 and 4 will reflect the government’s EBacc policy, taking into account the starting point of each school and the steps the school has taken to respond to the EBacc policy”. It will not, however, set any formal thresholds for EBacc entries, below which schools could not be rated as ‘good’ or ‘outstanding’.

Critics from the education and arts sector have panned the announcements. Deborah Lawson, General Secretary of trade union Voice, said the organisation continues to have “serious concerns” about the EBacc.

“We regard the EBacc as narrow, restrictive and pointless. This arbitrary choice of subjects does not promote a broad and balanced curriculum, and excludes vocational and technical subjects, RE, drama, music and ICT from a measure of supposedly ‘rigorous’ academic subjects.

“Voice has also raised its concerns about many schools’ ability to deliver the full range of EBacc subjects during the current teacher recruitment and retention crisis. The scarcity of teachers in many subjects seems to be reflected in the DfE’s watered down targets for pupils studying EBacc subjects.”

General Secretary of the Association of School and College Leaders, Geoff Barton, expressed his organisation’s desire for the EBacc to “curl up and wither away”, as it is “hard to see what purpose it serves any more”.

“It helps neither students, parents, teachers, nor school leaders. In our view, and in line with the Chief Inspector of Schools, schools should provide a curriculum with an academically rigorous core for all, plus broader opportunities in the arts and sport,” he said. “What schools and colleges offer should be driven by the needs of their students and communities, not by centrally-set targets.”

This was echoed by creative lobby organisation the Creative Industries Federation (CIF), which issued a damning indictment on the consultation response, saying it continues the Government trend of “devaluing creative subjects”, and threatening the growth of the creative industries.

“This response demonstrates that this government is continuing to pursue a policy that is ill thought through and short-termist – in spite of its claims to want to boost productivity and life chances,” added John Kampfner, CIF’s CEO.

“The creative industries have been identified as one of five priority sectors in the government’s industrial strategy in recognition of their economic contribution. However the Department for Education has not answered the sector’s concerns by continuing to sideline creative education in favour of academic subjects.”

He continued: “In recent months the Federation has had informal assurances from ministers and officials across Whitehall that they understand the importance of creative education - but we are waiting for any positive movement, specifically from DfE, that reflects this.”

2,755 people responded to the long-overdue Government response to the 2015 consultation, which asked respondents to comment on potential challenges to near-universal introduction of the EBacc in schools.

Most expressed concerns about the prospects for a broad and balanced curriculum. 71% of responses to a question about increasing the number of pupils taking the EBacc raised issues such as the place of arts, technology and creative subjects in an EBacc curriculum.

656 of the responses were from the ISM’s Bacc for the Future campaign, a coalition led by a number of creative organisations, but in its analysis and reporting of the consultation responses, the Government has siphoned these off and detailed them “separately”.

When asked how schools should decide which pupils should not be entered for the EBacc, 62% of respondents who were not part of the ISM campaign emphasised the importance of considering whether the EBacc is the best option for individual students. Half also said that lower ability students should not be entered, and over 40% said “pupil choice” should be a determining factor.

Few details are given of the separately analysed Bacc for the Future-affiliated responses. The Government simply notes that they argued the EBacc precludes children from studying a broad and balanced curriculum, and the introduction of the EBacc has caused a drop in the uptake of individual arts subjects.

Deborah Annetts, founder and leader of the Bacc for the Future campaign, said they have “no choice” but to step up the campaign and urge the Department for Education to think again. She said: “For a Government that claims to care about economic growth, social mobility, diversity and the creative industries, this decision is short-sighted and misconceived.

“A matter of weeks after Ofqual confirmed the negative impact the EBacc is having on creative subjects in our schools the Secretary of State has betrayed the future of our children and their opportunities for work as well as our thriving creative industries.”

She added: “We would ask Justine Greening to meet with Bacc for the Future representatives as soon as possible so she can understand first-hand the damage this misguided policy is having.”

No impact on arts

Throughout its response, the Government repeats disputed figures suggesting that entries to arts subjects “have not fallen” as a result of introducing increasing emphasis on the EBacc in schools. It cites data showing that “the proportion of pupils in state funded schools taking at least one arts subject is now slightly higher than in 2011 (45.8% in 2011 to 48.0% in 2016) and Art and Design continues to be one of the most popular GCSE subjects, with over one in four pupils in England taking it in 2016”.

Given these figures, it appears that the dramatic decline can be attributed to a falling number of students taking more than one arts subject – the opposite trend to science, where increasing numbers of students are taking GCSEs in three separate subjects.