Both Glasgow and Edinburgh were ranked higher than London on a cultural and creative index compiled by the European Commission. 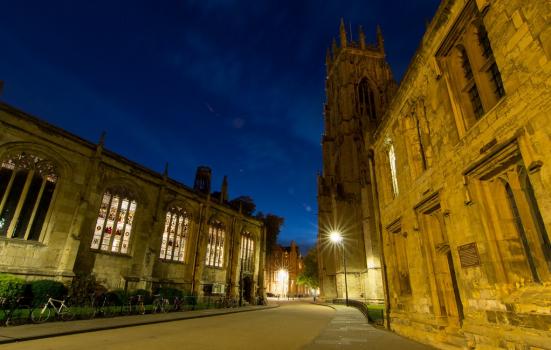 York is the UK’s most culturally vibrant city, according to a new index published by the European Commission.

The city is ranked ahead of both Glasgow and Edinburgh based on its cultural venues, facilities, participation and attractiveness. It also outperforms London, which is placed ninth in the UK.

The second edition of the Cultural and Creative Cities Monitor, designed to help policy makers identify strengths and opportunities, uses 29 indicators to benchmark the attributes of 190 European cities.

‘Cultural vibrancy’ is one of three main areas that cities’ cultural and creative potential is assessed in. The other two are ‘creative economy’, which captures how a city’s cultural and creative sectors contribute to its economy, and ‘enabling environment’, which identifies assets that help a city attract creative talent and stimulate cultural engagement.

When all these categories are considered together, Glasgow achieves the highest score in the UK, coming seventh among cities with a population of between 500,000 and 1 million. Denmark’s capital Copenhagen tops that category.

London ranks third among Europe’s biggest cities – those with more than 1 million inhabitants – behind Paris and Munich.

Earlier this month a study commissioned by City Hall found that the UK capital’s creative industries boost London’s economy by spending £40bn a year within their supply chains.

Bristol is the best performing UK location in the category for cities with 250,000 to 500,000 people, which is topped by Florence. Bristol sits in fourth place, with Brighton in sixth.

York is the highest placed of the UK’s medium-sized cities (100,000 to 250,000 residents), coming seventh in Europe. Lund in Sweden, a new entry not included in the monitor’s first edition in 2017, ranks top in this category.

Reyahn King, CEO of York Museums Trust and chair of York Cultural Leaders Group, said the city’s high ranking for cultural vibrancy was public recognition of the fact that it combines its heritage with “cutting-edge contemporary creativity”.

She said York’s cultural and heritage organisations were working together to develop a cultural strategy for the city, aimed at transforming its cultural infrastructure and heritage assets by 2025. The plan is currently in draft form. Its key areas of focus include place making, young people, talent development and retention, and culture and wellbeing.

King said: “It’s an interesting lesson that strategy is not about a piece of paper; it’s about working together and sharing that vision.”

In 2014, York became the first UK city to be designated as a Unesco Creative City of Media Arts.

King said that ranking in seventh in Europe among cities of a similar size showed that York was “part of an international creative city network”.

She added: “There is a determination to engage our residents in culture and [use] culture to create a sense of place and wellbeing.”

The overall list includes 98 cities that have been or will be European Capitals of Culture up to 2019, or which have been shortlisted up to 2023; 59 Unesco Creative Cities; and 33 cities hosting at least two regular international cultural festivals running until at least 2015.

The monitor was created by the Joint Research Centre, the European Commission’s science and knowledge service. Tibor Navracsics, who is responsible for the centre, said: "The first edition of the Cultural and Creative City Monitor proved to be a success, enabling cities across Europe to boost development by better harnessing their cultural assets. I am confident that the second, expanded edition will be equally useful for city authorities, the cultural and creative sectors, and citizens themselves.”

The monitor was first launched in July 2017. It is expected that it will be updated every two years.