Venues pledge to only cast trans actors for trans roles

The movement is part of a sea change in representation in theatre: "It's comparable to non-disabled people playing disabled characters, or even white people putting on blackface." 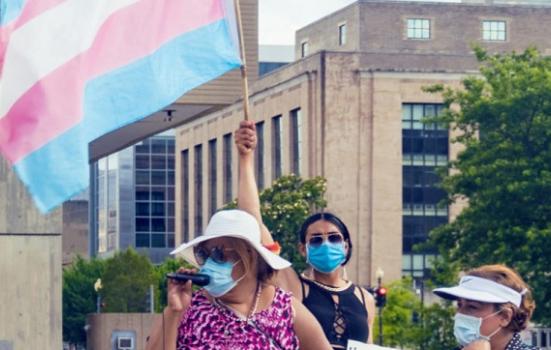 A trans rights protest outside the British High Court in December
Photo:

Twenty theatres have vowed to never cast a cisgendered actor in a transgender role or endorse a production that does.

Big names such as the Royal Court Theatre, Royal Exchange, Leeds Playhouse, Northern Stage and HOME in Manchester have signed a trans casting statement developed by Milk Presents, Outbox and The Queer House. More than 40 producers, casting companies and professional groups too have vowed to actively seek opportunities for trans, non-binary and gender non-conforming actors, "acknowledging that they are currently underrepresented on our stages and screens".

The move signals a shift in how theatres approach representation as the signatories push for more adherents: "This small commitment... makes a big change," The Queer House says.

An addendum to the statement explains its timeliness, saying it is important "we prioritise communities that have given culture and life to the very essence of theatre and recorded arts" as venues emerge from lockdown.

Transphobic hate crimes quadrupled in the five years to 2020 and Lord Herbert, the UK's special envoy on LGBT rights, said this week that trans people face "really quite serious discrimination" amid perceptions of a "culture war".

"The exclusion and dangerous misrepresentation of trans, non-binary and gender non-conforming folks in the media, arts and culture sector has been weaponized to cause harm, violence and pain."

It was developed after Donmar Warehouse and Birmingham Rep - both signatories to the statement - produced 'Breakfast On Pluto' with a cisgender actor playing Patrick/Pussy Bayden, a role often interpreted as a trans woman.

The production was cancelled but activists have pointed out the harm in casting cisgender people in transgender roles.

This practice is "perpetuating the narrative that being trans is something you can pick and chose," trans advocate Ugla Stefania Kristjönudóttir Jónsdóttir wrote.

"To me, it’s comparable to non-disabled people playing disabled characters, or even white people putting on blackface. It’s taking an identity that you don’t fully understand, while having to suffer none of the disadvantages or understanding the harm it can do."

An open letter by several trans and non-binary theatremakers in April further explains: "What you do when you cast a cis man, put him in a dress, and label him as trans, is you let violence happen to a transgender woman in the future."

Actor Griffyn Gilligan commented: "If you didn't sign the trans casting statement, you don't get to tweet one damn thing about pride month."

Roles for trans actors are extremely limited, and when they are available, cisgendered actors are regularly hired to play them.

More than two-thirds of trans-led performance (69%) is self-produced, occuring in fringe venues or on tour because mainstream and commercial theatres rarely host or commission this kind of work.

There is also a problem of unpaid labour. Similar to arts workers of colour, trans people are often expected to lead efforts to dismantle systems of oppression.

Dramaturg Deidre McLaughlin welcomed the report and casting statement as a step forward.

"This queer director hears you and is committed to casting trans artists in their work. There is a labour that comes with adding to the information and conversation."

But the statement addresses just one small part of a much wider problem in the arts sector, Criag wrote.

"The lack of trans inclusion needs to be addressed in all areas, including backstage crew and theatre staff. The problem does not begin and end with who is on stage."

Producers and venues may run into difficulties around disclosure: 'outing' an actor as trans can be an offense against the Equality Act if that information was acquired in an official capacity.

Recent diversity statistics from Arts Council England indicate few LGBT people disclose their identity to employers. The sexual orientation of half of employees at National Portfolio Organisations was not known last year, and trans identity is not specifically recorded.

While casting website Spotlight introduced transgender and non-binary as gender options on profiles last October, actors initially had to register as either male or female before changing their settings.

"If everyone in the circle is encouraged to say their name and pronouns, it takes the pressure off trans folks to ‘out’ themselves, or to be the only ones disclosing.

"If you make a mistake, apologise, correct and move on. No dramas."

It also recommends considering ways to protect trans actors from abuse on social media and during their travels to and from venues.

"To change this industry for the better we need to work together, because the producers and creative teams aren’t listening to the trans creators."