England's National Portfolio Organisations may not be as diverse as reported, with 50 facing possible funding cuts over their failure to improve. 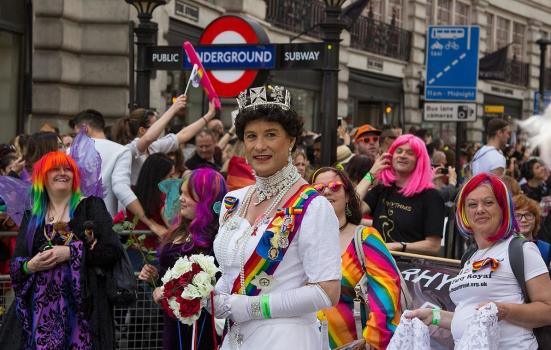 LGBT-identified artists are more than twice as likely to receive project funding as the average
Photo:

Workforce diversity at England's funded arts organisations may not be increasing, contrary to recent reporting from Arts Council England (ACE), with up to 50 major institutions facing sanctions over their failure to improve.

Data from ACE's diversity survey for 2019/20 showed a growth in Black, Asian and ethnically diverse employees to 13% of the workforce at National Portfolio Organisations (NPOs), up from 11% the year prior, and an increase in disabled arts workers from 6% to 7% and in LGBT workers from 6% to 8%.

But analysis suggests the figures are being driven by more people declaring their ethnicity and disability status: the size of NPOs' White and non-disabled workforces also grew last year, each by five percentage points. The straight-identified workforce grew from 37% to 43%.

Asked about these disparities, ACE was unable to say whether the improvements in workforce diversity were genuine.

"Year-on-year changes in levels of representation could be due to the way data has been reported during the pandemic," a spokesperson said.

Some organisations did not submit data last year and were excluded from the comparisons, meaning the data reflects 737 of 840 NPOs (87.7%).

"Changes in success rates could have occurred for a variety of reasons and we could only speculate on what these may be. We do however review our success rates in relation to diversity over time, and use this data to inform how we encourage people from underrepresented groups to access our funding."

The NPO workforce is still not representative of the UK's disabled and ethnically diverse working age populations - 22% and 17% respectively. Their LGBT cohort (8%) is higher than the population average of 2%; however, this likely reflects willingess to self-declare at a national level.

Creative Case for Diversity ratings, which assess NPOs' progress on workforce and programming diversity as 'oustanding', 'strong', 'met' or 'not met', improved overall in 2019/20, with 173 organisations (22% of the portfolio) increasing their rating.

However, three-quarters of the portfolio did not improve their rating last year and 15 funded organisations (2%) performed worse than in 2018/19.

ACE has warned that all NPOs recieving more than £250,000 per year must reach a 'strong' rating by October, and is currently considering sanctions against those who fail to improve.

The funder has so far ignored requests for information about the sanctions, but a foreword by ACE Chair Nicholas Serota to the recent report makes clear that funding cuts are on the table.

"They [NPOs] will be asked to use this information to set their own targets to diversify their governance, leadership, workforce, programming and audiences; we will expect these targets to be ambitious and owned and monitored at board level.

"This is a journey that organisations tell us they want to be a part of and the Arts Council will provide resource and support to help build a coalition of the willing.

"For those who lack the will, we shall hold them to account through our funding decisions."

Thirty-five NPOs have moved up the ranks to 'outstanding' (10% of the portfolio), with Eclipse Theatre Company the only organisation to jump up two places from 'met' in a single year. It did not respond to a request for comment.

Glyndebourne Productions, which fell from 'met' to 'not met' said this was "disappointing given the work we are doing to address inequalities in the industry".

Its poor rating, which puts it at risk of funding cuts, was based on a lack of progress on diversity in its touring activities and a lack of evidence its board was 'engaging' with the Creative Case for Diversity.

"We want Glyndebourne to embody an environment where all our employees, artists and audiences are welcome and can thrive," a spokesperson said.

LGBT artists and organisations had massive success in applying for funding last year, tripling the value of the grants they received in 2018/19.

The 2019/20 report included data from The Audience Agency on National  Lottery Project Grants (NLPG) and Developing Your Creative Practice (DYCP) that showed a general success rate for applicants was 44% and 16% respectively.

Success rates for diverse applicants increased across the board. The value of NLPG grants to Black, Asian and ethnically diverse organisations and artists' increased by 5 percentage points and DYCP grants by 3 points, while DYCP grants to disabled applicants grew from 17% to 20% of total funding.

But LGBT applicants received 56% of the value of DYCP grants last year and 32% of the NLPG pot.

They were more than twice as likely as average to access DYCP funding. 64% of LGBT applicants to the NLPG programme were successful.

ACE did not respond to questions about this enormous increase and disparity, which continues an upward trend in LGBT project funding identified by ArtsProfessional in 2019.

In that year, 58% of LGBT-led organisations applying to the NLPG programme received grants - a 25% higher success rate than the average.

Organisations and individuals will be expected to report socio-economic data for all funding programmes from the end of the year.

ACE says it won't set class diversity targets, but is "exploring ways to better capture data around socio-economic diversity and will announce more on this in due course".

It has already piloted a socio-economic status question for DYCP applicants and made audience diversity monitoring mandatory for its highest-funded organisations. 8% of NPOs' audiences have a disability, while 11% are Black, Asian or ethnically diverse.

Early data suggests NPO audiences are affluent and well-educated: nearly 60% are in intermediate or supervisory managerial work, with 8% in the top national social grade.

More than a third (38%) of arts audiences populate the lowest three rungs of the socio-economic ladder, the data shows.

ACE, whose gender pay gap fell from 7.5% to 6% last year, has indicated it may require organisations to provide this data too.

When asked, a spokesperson commented: "We’ll outline our position on pay gap data when we publish the second phase of our delivery plan later this year."

While is disheartening, it is not surprising that so many cultural institutions are unable to meet Arts Council targets for cultural diversity and equality. But besides threatening them with sanctions, why not also give more encouragement and support to those who manifestly do know how to do it? The Grand Union Orchestra, an independent artist-led Company organised on a collective rather than hierarchical model, is now nearly 40 years old. In that time, we have not produced a single project with less than 70% professional artists from Black, Asian or minority ethnic communities, and 40% women (the figures are often even better for participatory shows). For 'evidence', you have only to take a casual look at our website www.grandunion.org.uk; but if you look more closely, you will see why. The content of our work is directly relevant to those involved, drawing on their lives, experience and above all their heritage. In short, diversity is integral to our artistic purpose and practice; our work could only be created in a diverse society. It also produces great art - imaginative, moving and exhilarating by turns, and highly original in form. There are other independent companies with a similar track record and credentials; meanwhile funders (Trusts and Foundations as well as the Arts Council) are struggling to help address inequality, racism, historical issues like slavery, colonialism and so on. One obvious solution would be to give those companies and their artists proper support (and not just financial) to develop what they already do well - beneficial in itself in these Covid-ridden times, but also providing useful possible examples, and potential collaboration, for others, including the big institutions.