The Prospect union says staff have experienced a 13% real terms pay cut since 2010. 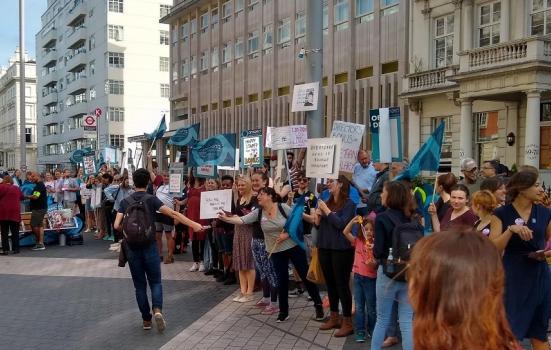 Staff strike outside the Science Museum in London
Photo:

Science Museum Group (SMG) staff are holding 24-hour strike action today following the rejection earlier this year of a pay settlement that offered most staff a below-inflation rise of 1.5%.

The Prospect union says that due to a series of below-inflation pay rises, workers have effectively had a 13% real terms pay cut since 2010.

The action adds to rising concerns over low pay in the cultural sector – although senior pay at large institutions remains high. Recent research by ArtsProfessional found that England and Wales’ top 100 arts executives shared pay packages worth £10m in 2016/17.

The SMG strike follows six days of action short of striking from 24-29 August, which included working to rule. Nearly 80% of Prospect union members said they were prepared to take strike action when balloted.

Striking staff outside London’s Science Museum have been making their point with banners and placards featuring slogans such as: ‘Collection = priceless. Staff = penniless’ and ‘’Living wage - it’s not science fiction’.

Unlike fellow national museums the Natural History Museum and Victoria and Albert Museum, Prospect states that at the lowest end of the pay scale the SMG still does not pay the real living wage.

Elliott Wilders, who works at the Science Museum, has started a petition calling for SMG to ‘meet the real living wage and the rate of inflation’.

The petition states: “SMG staff are passionate about what we do. But we feel overworked, undervalued and unable to afford to continue with the jobs we love because of the pay cuts, reductions in benefits and loss of staff welfare facilities.”

‘Passion does not pay bills’

On Twitter, Oliver Betts, Head of Research at the National Railway Museum, said: “We're on strike today. We don't want to be - we love our jobs and our museums. But it’s wrong to ask people to work for love and not pay them a living wage.”

Dr Elizabeth Bruton, Curator of Technology and Engineering at the Science Museum, tweeted: “I love my job but am going on strike today because @sciencemuseum does not pay the London Living Wage and we've been offered yet another below inflation pay rise year after year. PASSION DOES NOT PAY BILLS.”

Prospect General Secretary Mike Clancy said: “Our members in SMG love their jobs but they cannot carry on with year after year of real terms pay cuts, and that is why they felt they had no option but to strike.

“I’m sure that most of the million or so people visiting SMG museums this summer will be astounded at how poorly its staff are paid, especially when they see that the director’s pay has increased by a third in just four years and his bonus alone last year was more than some workers earn in total.”

Clancey added: “It is clear from the accounts that SMG can afford to pay a reasonable wage. It’s time for management to sort this out so our members can get on with the jobs they love.”

A statement from SMG said: “We firmly expect all our museums to open on the day of the strike and our priority will be to ensure our visitors have an enjoyable day.

“The overall pay settlement represents a 2.7% increase in salary costs which we believe was a reasonable offer, given the challenging overall financial picture.

“All colleagues received an increase of at least 1.5%, and we offered up to 6.9% for those on the lowest salaries.”