Auditors warned that urgent action was needed to avert overspending and delays to the project before planning permission for four key buildings was granted in June. LLDC says it is still in the process of addressing these concerns. 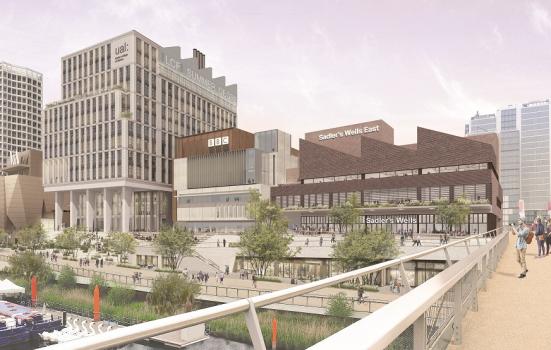 An artist's drawing of the planned Stratford Waterfront development

The major new cultural and education quarter planned for East London’s Olympic Park is highly likely to be delayed and overspend on its £470m budget, ArtsProfessional has learned.

In June, planning permission was granted for a development on Stratford Waterfront that will include four new venues for major cultural institutions – the Victoria and Albert Museum (V&A), the BBC, Sadler’s Wells, and the London College of Fashion. Together with a new campus for University College London (UCL) and a separate V&A Collections Centre in the former Olympic Park, these will form the ‘East Bank’ cultural district.

But documents seen by AP show that auditors only approved cost plans for Stratford Waterfront on the condition that their concerns about projected overspending were urgently dealt with.

The London Legacy Development Corporation (LLDC) told AP that East Bank is facing a “high likelihood” of overspending and delays, and that it is currently running about 3% over the £470m budget for the construction projects LLDC is responsible for building (which does not include the new UCL campus or the V&A Collections Centre). The total budget announced for the whole East Bank project in June was £1.1bn.

LLDC said it is addressing the concerns identified in the auditors’ report, but admitted that this work was ongoing.

The agency also confirmed that as the East Bank project moves ahead it is planning to cut back its spending on external risk assessment. This has meant putting an end to quarterly external risk reviews, which have been replaced with bimonthly internal reviews.

A cost assurance review in January from consultants Turner and Townsend (T&T) gave LLDC’s Stratford Waterfront plans an overall ‘amber’ rating on a RAG (red, amber and green) scale “due to the significance of the [cost] report and the level of risk currently associated to it”.

T&T’s analysis found that plans for a new V&A museum building, as well Carpenters Land Bridge – a planned pedestrian and cycle bridge – were set to overspend. LLDC planned to bring these projects back within budget through ‘value engineering’ – a systematic process of achieving a desired function for the lowest possible cost.

But the report expressed concerns that this appeared not to have happened. It recommended that “a value engineering exercise is done as a priority [redacted] to allow design changes to be implemented early to limit the possibility of programme delay and to also provide reassurance that either the budgets can be met or to provide time for alternative funding to be put in place should it be required.”

T&T’s report said the amber rating “constitutes as a reasonable basis from which to proceed into Stage 4, with caution, on condition that our recommendations and concerns as highlighted throughout this report are addressed and closed out as a priority.”

A spokesperson for LLDC told AP: “We have addressed the recommendations through a range of measures including pre-tender value engineering, providing clarity to bidders on [construction] packages and increasing the number of packages from 18 to 27 in response to market feedback.”

Asked specifically whether T&T’s concerns and recommendations had been ‘closed out’, an LLDC spokesperson said: “T & T’s actions for Stratford Waterfront have either been closed off or ongoing work is being undertaken.”

The spokesperson confirmed that “value engineering work has been and continues to be part of the process to manage costs as you would expect for a project of this size”.

Earlier this year, AP revealed that V&A East had already had to call on financial support from the Mayor of London to cover an expected revenue funding shortfall once it opens of up to £12m.

‘High likelihood’ of overspending and delays

The latest report from LLDC’s CEO, presented to its Board in September, confirms that the East Bank is facing several serious risks. These are the “risk that the East Bank will be delayed or costs will be more than anticipated”, “risk to East Bank funding”, and “East Bank construction interface and procurement risk”.

Each of these is categorised as red on a RAG scale. An LLDC spokesperson told AP: “This is a major project so the risks are high as we have flagged in our statement of risk appetite. The ‘risk that the East Bank will be delayed or costs will be more than anticipated’, and ‘East Bank construction interface and procurement risk’ both have high likelihood and consequences, but the ‘risk to East Bank funding’ is red because of high consequence rather than likelihood.”

The identified procurement risks relate to LLDC’s decision to award 27 different construction packages rather than use one contractor for the entire project. LLDC documents provided to AP acknowledge that this “exposes LLDC to an increased risk compared to a traditional or design and build procurement”.

In response, LLDC has adopted an insolvency strategy that includes measures to assess and monitor the financial stability of contractors before and after contracts are awarded. LLDC can also take action following contractor insolvency, but details of this process were redacted from the documents.

Until February this year LLDC’s risk assessments were informed by a quarterly ‘third line’ assurance report from consultants RSM. However a drive to cut costs means this has now been replaced with a bi-monthly ‘second line’ internal assurance report.

An LLDC report setting out the plans – which have since been implemented – says: “RSM’s role would be refocused on risk based deep dives which would be informed by the Risk and Assurance Board. The core-ongoing assurance activities currently undertaken by RSM which inform the current Quarterly Assurance Report (QAR) would stop and that the last QAR would be in February 2019.”

A spokesperson for LLDC said this decision was made “to ensure best value from our assurance expenditure and to provide more detailed and regular assurance intelligence to inform business decisions.” They added that this would not leave LLDC more dependent on internal risk assessment and would maintain a ‘three lines of defence’ assurance model that is regarded as best practice.

At a question and answer session with the London Assembly in September LLDC’s Chair Sir Peter Hendy and Chief Executive Lyn Gardner struck a cautious note on East Bank.

Garner said LLDC was “around 3%” over its budget of £470m for the Stratford Waterfront buildings and that 10% of the budget was set aside for contingency.

Asked whether she was confident this would be sufficient, Garner said: “To be honest, it is really difficult to say that I am confident, first because we are only partway through the packages… We are out there procuring at a difficult time. We are hopeful that we will bring this in as close to budget as we possibly can.”

The buildings were planned to open in 2022 and 2023 but Garner suggested that these dates could be pushed back. “London College of Fashion wants to open the doors in autumn 2022, so there is a programme around that, she said. “The other buildings are more relaxed and we do not have target dates for opening those buildings”. She added that the 2022 target for London College of Fashion was not a contractual obligation.

She confirmed that any East Bank cost overruns were not underwritten by the Greater London Authority, saying “at the moment, the budget is the budget, and if there is an overrun, there will need to be a conversation about where that money comes from”.

In June, the total budget for East Bank, including the UCL campus, was stated as £1.1bn, including confirmed public funding of £385m from the London Mayor and £151m from the UK Government. The remaining capital funding was planned to come from project partners, residential land sales and philanthropic fundraising.

At the same session, Hendy commented: “The fact is that the construction industry in the UK and in London is not in a good place at all, and we are some way through the tendering process for the construction packages. It is fair to say that it is challenging. We cannot tell you what the end result of that is, but we can tell you that we are all over this because you need us to know what is going on as the tendering practices unfold.”

A statement from LLDC said: “East Bank is one of the most ambitious culture and higher education programmes the UK has seen for a generation. Construction work has begun on site to realise this programme and with all large scale complex construction projects, there are risks. Particularly in light of the current uncertainty in the construction market. As a responsible developer we have implemented a range of measures to manage cost, programme and procuring contractors in the market alongside our delivery partners Mace.”