The GLA has agreed to underwrite a budget shortfall of up to £12m, which is expected despite a £9m a year boost in funding from DCMS. 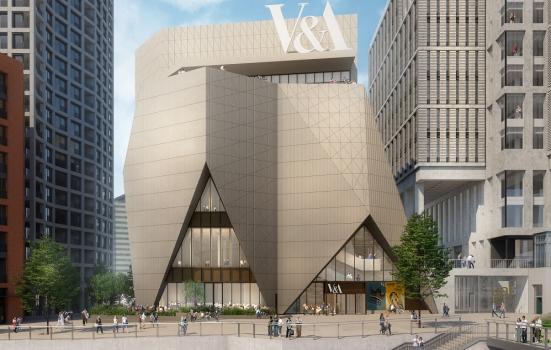 The Mayor of London has agreed to provide up to £12m to cover a predicted funding shortfall for the Victoria and Albert Museum’s (V&A) planned new sites in East London.

Plans for V&A East comprise two new buildings in the Queen Elizabeth Olympic Park: a new museum building on Stratford Waterfront, as well as a research and collections centre in the existing Here East building.

Sadiq Khan last year approved plans for the General London Authority (GLA) to provide revenue funding up to £1.5m a year over the next 15 years, up to the overall cap of £12m, to support running costs for the two venues after they open in 2023.

£9m a year from DCMS

V&A East will form part of a new culture and education district called East Bank. Alongside the V&A, the district will include bases for Sadler’s Wells theatre, BBC Music, the London College of Fashion, and University College London (UCL).

Even after accounting for a £9m boost in its annual grant funding from DCMS to support the new venues, the museum has predicted a budget shortfall. Documents show that the Treasury approved the extra money on the understanding that “the estimated future funding gap remaining after this grant funding would be provided by the GLA”.

A situation where it required this extra support was considered “the most likely scenario” by the V&A in the business case it presented to DCMS. But it also projected an “optimistic scenario based on a greater number of visitors”, in which it would not require the extra support from the Mayor.

The GLA’s financial support will not cover any shortfall that arises from a reduction in the contribution to V&A East from DCMS, nor any of the V&A’s planned collaboration with the US-based Smithsonian Institution.

If there was any leftover money from the V&A’s one-off Government grant for moving its stored collection out of Blythe House in central London, the museum could also use some of this to cover the funding gap.

When approached for comment, the V&A referred ArtsProfessional to the Mayor’s office.

A spokesperson for the Mayor of London said: “East Bank is the most ambitious project of its kind for decades. It will create 2,500 jobs, deliver £1.5 billion of economic benefit and 600 new homes.

“As the world’s leading museum for art and design, the V&A is an integral part of this scheme and will inspire young Londoners and attract hundreds of thousands of visitors every year.

“Given the importance of the V&A as a cultural tenant, the Mayor has agreed to provide a capped level of financial support to assist with this move and to help establish successful operations.

“This support will only be used if absolutely required. When the museum is profitable, part of the profit will be used to reduce City Hall’s contribution in any loss-making years.”

The London Legacy Development Corporation (LLDC) is overseeing the East Bank project, whose total capital cost is expected to be £1.1bn. The London Mayor is contributing £385m, with a further £151m coming from the UK Government. The Mayor’s spokesperson said that “the remaining amount comes from partners, residential land sales and philanthropic fundraising”.

The initiative will be spread across three sites in the Olympic Park. The new V&A East museum will form part of a development at Stratford Waterfront alongside a Sadler’s Wells dance theatre, London College of Fashion campus, BBC recording studios and residential buildings. A new campus for UCL will be built on a separate site. The third site is the Here East building, which will include the V&A collections and research centre and a collaborative research space for UCL which has already been launched.

LLDC was unable to give a breakdown of the cost of each building for commercial reasons, but said the total value of 27 construction packages for the Stratford Waterfront development was around £300m.

Monday, 30 March 2020
Bournemouth Symphony Orchestra says it will honour freelancers' fees for all cancelled or postponed performances up to 30 April. The orchestra has lost its summer work at Grange Festival 2020. It... read more
(Slipped Disc)