The former Culture Minister says his party’s decision to “relentlessly” focus on STEM hurt music education – but also blames head teachers for not prioritising the arts. 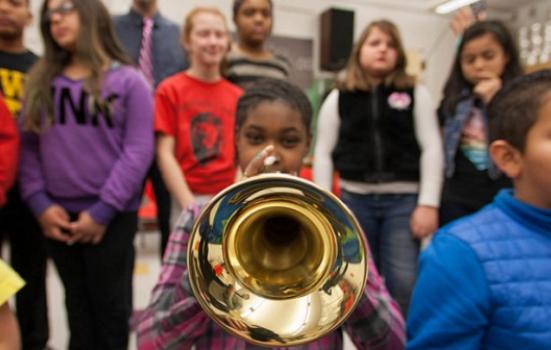 MPs have debated the cause of and solutions to a decline in music education
Photo:

Former Culture Minister Ed Vaizey has suggested that leadership rather than budget constraints is the key factor in maintaining a strong music offering in schools.

Speaking in a debate in the House of Commons this week, Vaizey said: “I feel strongly that headteachers – I will try to put this delicately – should not be absolved of all responsibility. School leadership plays a massive part in ensuring high-quality music and arts education.”

But he acknowledged that the EBacc performance measure had also played a part by giving teachers a “clear signal” that focusing on arts and music will not be rewarded, saying:

“One of the frustrations of working with the former Secretary of State for Education [Michael Gove] was that … he was relentlessly focused on science, technology, engineering and maths, reading, writing and arithmetic, and the EBacc".

Vaizey said teachers became afraid to focus on the arts “because they felt they would be penalised in the league table. That can and must change.”

In the debate, MPs across the political spectrum also called on Ofsted to reserve ‘Outstanding’ ratings for schools with strong music education, saying the subject has been pushed “to the fringes of the way that a school’s success is judged”.

The discussion also saw concerns raised about arts being excluded from the English Baccalaureate (EBacc) performance measure and the creation of a culture that has “penalised” schools that focus on arts and music.

But Schools Minister Nick Gibb countered that the EBacc “does not necessarily mean a reduction in the arts”.

MPs’ support for a change in Ofsted’s inspection criteria follows recent demands from Arts Council England to give only ‘Requires Improvement’ or ‘Inadequate’ grades to schools that lack comprehensive arts programmes.

Both Labour and Conservative MPs challenged Vaizey’s statements and called for changes to Ofsted’s inspection criteria.

Labour MP Thelma Walker, a former headteacher, said her old colleagues “tell me that where budgets are concerned, they have crossed a red line”.

“They are making cuts primarily [to] support staff and the creative arts and music curriculum.”

Kevin Brennan, another Labour MP, said the “incentive and accountability measures put in place by this Government” had contributed to a decline in the numbers of music teachers and children taking music exams. Conservative David Warburton said a 30% decline in students taking A-Level music was “a statistical canary down the mineshaft, warning us of the result if current practice continues”.

“The flexibility given to academies is not a licence for them to sideline music education or treat it as an optional extra, especially given that 72% of secondary schools are now academies,” Warburton said.

Gibb did not respond to questions about changing Ofsted’s judgement criteria but said its new inspection framework, which applies from September, will support a more “broad and balanced” curriculum.

He said the EBacc was “designed to be limited in scope” so that students could study additional subjects including music: “Many pupils decide not to study the arts as academic subjects but continue to take part in artistic activities in and out of school.”

The Schools Minister also disputed claims that music education was in decline, saying the percentage of teaching time spent on the arts remained “broadly stable” between 2010 and 2018, despite mounting criticism of this stance.

A Government survey of primary schools indicated that teachers spend as much time on music as they do teaching “other important subjects such as history and geography”, Gibb said.

Gibb’s stance on music and arts education has faced mounting criticism. A report earlier this year challenged his claim that arts GCSE entries were “broadly stable” using the DfE’s own figures, and the UK Statistics Authority also recently questioned the trustworthiness of the Department’s use of statistics, following concerns raised by ArtsProfessional and others.