A landmark report makes the case for investment ahead of the next Spending Review, saying innovation is being stifled just as it is needed most. 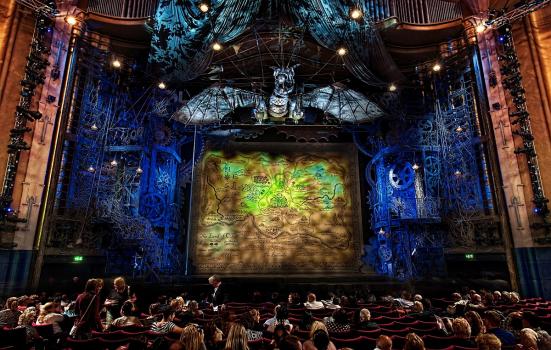 There is a "sweet spot" at the intersection of creativity and digital skills that the sector needs support to exploit, AHRC says
Photo:

Too few research and development (R&D) projects in the creative sector are progressing due to a lack of funding, a new report argues.

A six-month research project by the Arts and Humanities Research Council (AHRC) and DCMS into the sector's response to the pandemic found it faced challenges accessing targeted support for its R&D work because current definitions exclude the arts and creative industries, placing the sector at a comparative disadvantage.

This is despite an evident groundswell of innovation over the past 14 months, with the unprecedented expansion of live streaming and other online content during the lockdowns demonstrating an untapped opportunity for growth.

"What is clear from everyone we have spoken to – and from our assembled case studies – is that cultural organisations have adapted and innovated to sustain our national life when we have needed them most," Cultural Recovery Commissioner Neil Mendoza and Oxford University Professor Andrew Thompson say in a foreword to the report.

AHRC Executive Chair Christopher Smith says there is a "sweet spot" at the intersection of creativity and technology that can supercharge audience engagement.

"All of the opportunities for growth through R&D sit with a really good and thoughtful relationship between creativity and technology."

Organisations that successfully innovated during the lockdowns tended to either be large companies with reserves or philanthropic support that were redirected to digital activities, or small outfits that could operate more flexibly.

Like Creative Group UK, AHRC wants R&D tax credits to be expanded to include the arts - HM Treasury recently consulted on potential changes to the the relief scheme - and funding to scale up the Creative Industries Clusters programme.

The £80m scheme, which has so far forged nine partnerships between creative organisations and researchers, could be key to creating new networks that boost regional growth, Smith said.

"I would love to see a second version of that - but broader, deeper and better funded."

AHRC's report, titled Boundless Creativity, says partnerships that bridge the gap between creative and technical expertise "will need to become the norm rather than the exception," increasing in number and scale if the sector is to have a sustainable future.

New digital services created during the pandemic present a strong "export opportunity", the report said, because they are so easily distributed.

"This will require new funding mechanisms that are more agile and flexible to meet the needs of commercial partners and enable greater experimentation".

It recommends the DCMS undertake research into digital skills gaps in the sector and invest in skills "bootcamps" to improve interconnectivity and boost regional growth.

Smith said there are too many "brilliant" creators who aren't equipped to deal with various platforms or the economics of digital distribution, a problem that also affects audiences: "I don't think we have a good enough picture for the arts of where digital poverty is preventing access."

The report says AHRC will incentivise bigger streaming sites to make their platforms open source or develop new, collaborative models with the sector that give creators more control over their content and its profits.

Smith acknowledged there is "a big open question" around how to achieve this.

"The issue is around how we generate intelligent platforms... I think the industries need to have a conversation and think about the way we join people up."

There is a need to reshape policy to spur innovation and ensure the successful initiatives created to date are not lost because creative organisations cannot afford to continue them, AHRC says.

The council has a policy fellowships programme with DCMS, with one fellow investigating opportunities in digital.

But Smith said cross-departmental thinking is needed, questioning whether university curricula give students who are trying to enter the creative industries the digital literacies they will need, for example.

Practices have shifted so rapidly during the pandemic that it's hard to know which innovations will stick and where to direct research and investment.

"We keep thinking we're over it and then maybe, we're not. There's a tension between, if we want the changes to last, we need to do something about it now but then there is also a test of time issue," Smith said.

AHRC is continuing this work through a Covid-19 'rapid response' research programme. It will report the findings back to DCMS, it says, although it does not know when.

Smith said that Boundless Creativity represents an "important milestone" in the relationship between AHRC and DCMS that will hopefully bear fruit in policy outcomes.

"Now, we are facing in the same direction."