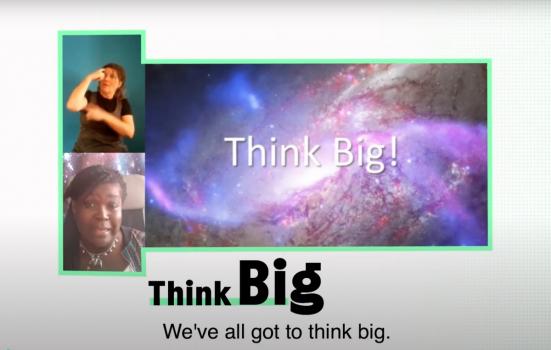 Festival UK* 2022 will feature extraordinary acts of public engagement showcasing the UK's creativity and innovation to the world. The process of selecting the final projects involved 30 teams in an intensive three-month period of R&D.

Following an open call, 500 creatives came together to develop projects that will take place across the UK but have global reach. The teams are made up of organisations and freelancers in science, technology, engineering, arts and maths (STEAM), representing all four nations. Each is led by an organisation – some with experience of large-scale participatory projects and some without. There are choreographers and conservationists, animators and urban gardeners, game designers, tech companies, and food and sustainable clothes engineers.

Festival UK* 2022 brought me in as Writer-in-Residence to document this process. I found myself observing an experiment in how tenders for such projects could be developed.

What was unusual was that the teams were not expected to bring an idea to the R&D. Instead, the focus was on people’s skills. Teams had to include at least one member that other members had not worked with previously and platform under-represented and emerging voices. Even more notable was the £100,000 budget each team had to pay creatives, prototype ideas and present.

This process was designed partly in response to the political origins of the festival’s funding  and the crisis the pandemic has presented for the arts sector. They knew they needed to pay creatives for their work and provide a space to network and experiment if they wanted the ideas to look different to a 'behind closed doors' curated programme.

'Creative Studio' was the beginning phase, a two-day-a-week, month-long online programme of talks, seminars and exercises to spark ideas. Speakers included Bernadine Evaristo, Nile Rodgers, Maggie Aderin-Pocock and David Olusoga. Teams were invited to dip in and out, with all the material available on ‘catch up’. After four weeks of independently working on their ideas, teams prototyped and pitched it.

Any organisation or artist knows of the unpaid labour in developing proposals to tender for a project you might never be a part of. It is rare to be paid to think of an idea and rarer still to be offered a programme designed to direct and support you to do so. Some teams did come with the kernel of an idea, many came with a theme or question, and others turned up with nothing but the people they had assembled. Having just a team is potent and risky, offering a democracy of cross collaboration that is unusual for work of this scale. There is a luxury to getting to know people and paying them to see what happens. What followed was a process both structured and open enough to allow different approaches to developing a project to reach 66 million people.

The teams were up against it. They faced not only the restrictions of online working and a short development period, but also the politics of being involved in a project to reinvent the idea of a ‘national festival’.

Although there were 30 teams, in reality it was several hundred individuals trying to make creative connections. Many people were meeting their collaborators for the first time online and the tentative beginning stages of working relationships were fast-tracked. The 'big thinking' highs of four weeks of network building was followed by an intense focus on how to make these ideas possible.

In this second phase I saw teams solidify, essentially operating as temporary companies. Some engaged further creatives and advisors to support their project in this feasibility stage, growing investment in Festival UK* 2022 and widening its impact. From behind my screen, I was watching artists, scientists and technologists think through what each of their fields could contribute to these multi-million-pound projects. What are the creative ideas of an astrophysicist? What can't you do if you have the knowledge and outreach of a major tech company? Solutions emerged from these cross-sector frictions. Wild and innovative outcomes happen when different sectors have space to collide.

The questions and challenges of what Festival UK* 2022 will represent were embedded in the process. What I saw was the creation of projects that were designed to respond to them.

From a network and community point of view, creative connections and cross collaborations have been made. There is a sense that ‘even if we don’t get through, this has been useful’. There will be loss for the teams that don’t make the final 10, but in theory, getting paid to think, design and try leads to a healthier, more inclusive arts culture than simply mourning the cost of your labour.

The themes within the concepts conceived are broad and overarching, ranging from the future, sustainability, new rituals, facing up to the past, space as a place and spaces for many. This process led to ideas that would have never been commissioned or curated in the traditional sense. However, it’s not completely democratic – there is still top-down decision making to ensure curatorial cohesion and operational delivery.

In a utopian world, where creatives and the country as whole are not under huge financial constraints, this process could offer a blueprint for future commissions beyond the prescriptive response to a tight brief. It could open up who creates projects and who participates, but it requires money, time, and sustained and dedicated change among organisations who tender, programme and commission arts projects.