More than 271,000 students applied to design, creative and performing arts degrees in the academic year 2021-22, a year after the government halved higher education arts funding. 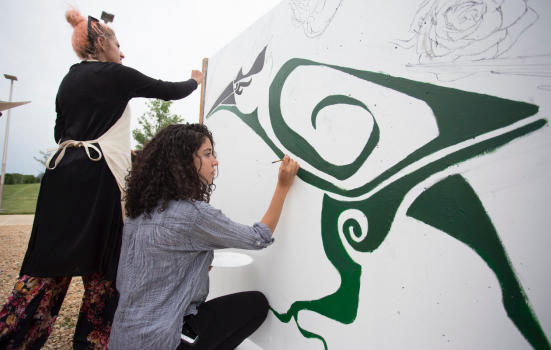 The number of students applying for design, creative and performing arts degrees increased by 6% last year, according to Universities and Colleges Admissions Service (UCAS) data.

The figure compares to a 3% rise in total applications. Design, creative and performing arts degrees saw the joint-third largest percentage increase across all subject areas, with only applications to media, journalism and communication degrees (11%) and computing degrees (16%) experiencing bigger jumps.

The increase comes one year after applications to creative degrees rose to their highest level since 2011 and the Department of Education’s enforced a 50% cut to per-student funding for creative and performing arts degrees, which came into effect last September.

“It shows the government rhetoric of poor value degrees has not filtered through to the applicant level.

“Applications have increased among both domestic and international students which shows, domestically, the strength of the demand-driven system with student choice at is heart, and that students are unperturbed by government messages. And internationally, the UK is seen as the place to be for world-class creative higher education.”

The increase comes despite dwindling uptake in the majority of creative subjects at GCSE and A-Level, which University of Leeds’ Head of School of Performance and Cultural Industries Jonathan Pitches told ArtsProfessional was “surprising”.

“These results push back against the sense the talent pipeline is being squeezed out at GCSE and at A Level. You would hope that the groundswell of excitement to study these subjects could actually start to affect some of the wider debates on what pupils study.”

He added that while parents may be contemplating the value of creative degrees, students attending open days are not worried about the status of a subject.

“If students bought into that narrative they wouldn’t consider a career in the performing arts, but they still do.”

“It comes down to a visceral desire to study creative arts that doesn’t seem to go away.”

Universities are adjusting to the loss of 50% of their per-student funding last September.

Pitches said his faculty, which consists of nine schools, has so far negated the cuts through a range of protections that come with being part of a larger institution. He added that smaller, specialist institutions or subject areas belonging to isolated departments are likely to be experiencing a “totally different story”.

“We’ve seen it in Wolverhampton, and in Huddersfield. There are areas for of real risks for the arts. I suspect that’s because they’re smaller units and don’t have that immediate cushion of other income”.

In London, creative higher institutions are adjusting to the loss of London weighting last September, a form of student premium funding which is estimated to have totalled in excess of £60m. A spokesperson for Goldsmiths, University of London told ArtsProfessional the loss will cost the university £2m annually.

“So far, London Higher members have found ways to minimise the shocks. It’s painful, but they’ve found ways to do it to reduce impact on staff and students,” she explained.

“The reality is, with inflation still rising and the cost-of-living crisis only worsening, the capacity of higher education institutions to absorb these costs for much longer is going to be squeezed, and tough decisions will have to be made.”

Beech and Pitches both said creative higher education institutions are experiencing underfunding due to rising costs.

Earlier this year, the government announced the tuition fee cap will be frozen up to and including academic year 2024/25, causing a loss of funding in real terms when adjusting for inflation.

Increased financial pressures could lead to job losses, a reduction in students places, or the loss of some courses. Pitches warned against the impact of further courses being forced to close: “If there is a continuing reduction, we are going to have a very elitist set of students come through into creative and performing arts, that's a real concern.”

A lifeline could come in the form of top-up funding aimed at world-leading specialist providers. Beech says creative higher education institutions are currently waiting for the result of an OfS consultation that will determine if they are eligible.

Last academic year, the OfS distributed £48m across 16 specialist providers, the majority of which were in the arts, but the consultation outlined 68 eligible providers that could be funded in the 2022/23 academic year.

The consultation closed in December, with eligible providers still waiting to hear if they were successful as the new academic year approaches.

“It’s been a long waiting game, and creative higher education institutions need some certainty as soon as possible,” Beech says.

“We can assume who will be funded, but we can’t take that for granted and universities at the moment are just living on a prayer that they will be included.”