Bristol Music Trust says the new title reflects a more inclusive narrative where music - not history - "is at the heart of what we do". 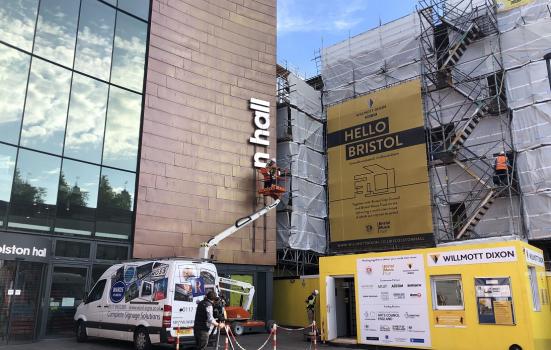 Colston Hall signage is removed from the building in June
Photo:

Colston Hall has been renamed Bristol Beacon to "distance itself from any association with its namesake," 17th Century slave trader Edward Colston.

The rebranding, announced by Bristol Music Trust Chief Executive Louise Mitchell on Wednesday morning, follows a 4000-person consultation and is part of a larger refurbishment project that began in 2017. It is not a reaction to campaigning since Black Lives Matter protestors toppled a statue of Colston, a historic Bristol MP, in June, the trust said.

At the unveiling, Mitchell referenced the movement and said the trust had "long been at the centre of the discussion in the city around the use of the name Colston".

She said the initial decision to change the name was "a tough ride" that drew strong views from locals.

"We were accused of seeking to erase and censor history. We were told that we were wrong to use the morals of today to judge the actions of the past.

"The truth is the organisaton and the city can’t continue to be held back by this historic association. The name has meant that the building is a place where some have felt unwelcome or that they did not belong, be they artists or audiences."

"This name change is a chance to be free to write our own inclusive narrative – one that puts the unity and joy of live music at the heart of what we do."

More than a name

Mitchell said Bristol Music Trust is "making a commitment to doing more than just changing a name and a building".

She announced a "transformation promise" - an organisational manifesto, a series of initiatives to improve the diversity for its workforce and audiences actions, and a £400,000 programme of community-led activity centred around the venue's reopening.

The first piece of artistic work to take place at Bristol Beacon will be "A New Song for Bristol". Locals will be invited to contribute to a musical archive of their experiences of 2020 and share their hopes for the future.

Mitchell told ArtsProfessional that the name 'Bristol Beacon' arose naturally throughout the consultation as the right choice, reflecting the joy and light that music brings to the city: "We could have called ourselves 'Colston Concert Hall' but that doesn't mean anything."

Colston Hall signage was removed from the building in June and the new moniker will take effect immediately. However, a logo for Bristol Beacon is yet to be designed. Young creatives from Rising Arts Agency will work on this over the next few months.

Colston Hall has was built 150 years after Edward Colston's death and was not founded with any of his money - but the name alone was "enough to be forbidding to some people," Mitchell said.

The Tate Galleries do not plan to change their name despite debate over the connection their namesake, Henry Tate, had to sugar plantations that operated on slave labour.

Research from the Centre for the Study of the Legacies of British Slave Ownership at University College London replicated on Tate's website says Henry Tate was 14 years old when the British slave trade was abolished. Neither he nor his family owned slaves.

However, his largesse, from which the Tate later benefitted, arose from his dry goods business, which was closely connected to the slave-grown sugar trade.

Mitchell said each organisation needs to make its own decision on a potential name change.

"We just felt it was right for us. If we felt there were people who weren't engaging with our work because of that, then we needed to do something about it."

Tate Galleries' collections include items donated by slave owners and people who became wealthy through the slave trade.

Tate Britain recently said it welcomes "discussion" about a mural in its restaurant that contains racist imagery. It added an interpretatation text to the artwork during a refurbishment in August, but did not remove it.

Bristol Mayor Marvin Rees acknowledged that some people feel the name 'Colston' reflects their idea of the  city.

"Even if they didn't get what they want, they know it was an inclusive, fair process and that's the best you can ask for in a democracy."

He hoped the new name would be "a positive contribution to the city's future".

"We have that physical renewal ... and in this naming process going on now we almost have a renewal of the soul of the building.

"The two of those going on together, it's very potent."