The West Yorkshire city becomes the competition's fourth winner, after a successful bid that championed diversity and young people 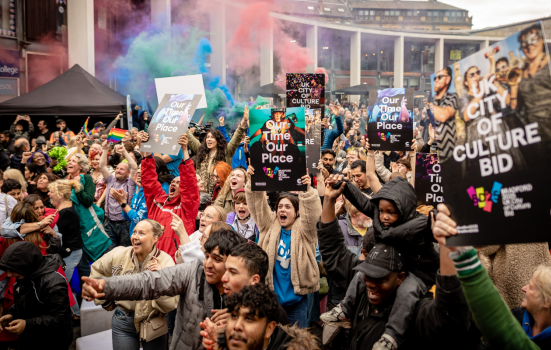 Bradford has won the race to become the UK’s City of Culture for 2025.

Awarded every four years, Bradford will take the baton from City of Culture 2021 winners Coventry. Bid organisers estimate the title could bring an extra £700m into the Bradford area, creating 3,000 jobs and attracting around 1.1m visitors.

“Bradford has been overlooked and underestimated for so long – it’s now our time to shine,” Bradford 2025 Chair Shanaz Gulzar said.

Bradford, the bookmaker's favourites to be awarded the title ahead of yesterday's annoucement, was one of the first areas to announce its intention to bid for the 2025 title, and launched a 10-year cultural strategy last year.

With one in four people in Bradford aged under 18, the winning bid was largely shaped by young people’s involvement. Judges were impressed by the bid’s ambition to celebrate the city’s diversity and create new opportunities across the district.

Sir Phil Redmond, Chair of the Independent Advisory Panel that picked the winner, said he is looking forward to seeing “how far the cultural bar can be raised in Bradford”.

“The selection is never about whether one bid is better than another, it is more that one bid has the potential to make a bigger and deliverable impact.”

Bradford will receive £270,000 in initial seed funding to assist in developing its plans. The title will likely bring millions of pounds of added investment, after Coventry received £172m in grants and investments during its year as City of Culture.

Work is underway to recruit a Creative Director and Managing Director to lead the bid’s delivery. Appointments are expected later this year, with recruitment of a wider delivery team to follow.

“The way that people from across the district have got behind the bid and the confidence people are now starting to show, the Bradford district has started to come to life like never before,” Bradford Council Leader Susan Hinchcliffe said.

For the first time, each of the three runners-up will receive a £125,000 grant to support the development of key elements of their bids.

The finalists fought off competition from 16 other applicants - a record number of entries to the competition - after groups of towns were allowed to submit combined bids for the first time. The longlist was then whittled down to eight, before the four finalists were chosen.

The three runners-up will look towards moving ahead with parts of their bids. Wrexham Council has said their bid – the only finalist located outside England – has “put us on a new trajectory that we aim to build upon over the coming years”.

Durham County Council has pledged to remain committed to delivering a “pioneering cultural programme with a lasting legacy” for County Durham in 2025.

Organisers of Southampton’s bid said the experience has “brought our city together, celebrated our home and unlocked ambitions”.

“This is not the end of our journey, we march on!”