‘Our Time, Our Place’

In the second in our series profiling the shortlisted candidates for City of Culture 2025, Shanaz Gulzar shares how Bradford's young people shaped a bid that awakened a sleeping giant of a city. 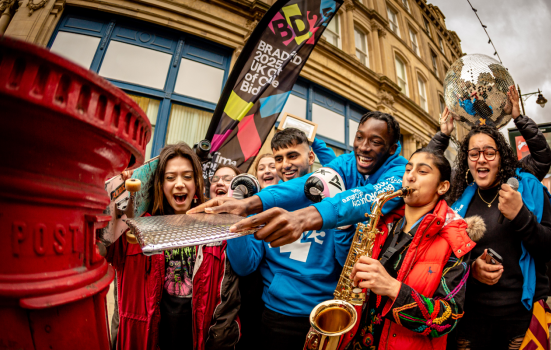 Bradford is ready to be the UK’s next City of Culture. Being famous for the Brontë Sisters, David Hockney, the National Science and Media Museum, and a plethora of cultural attractions made it an obvious candidate, yet there has been hesitancy. Should a place with acute levels of social inequality be embarking on such an endeavour?

That question will have echoed ferociously in town halls around the UK. But it’s exactly why we should be doing this. In the end, it was a softly spoken 12-year-old girl who signalled the start of this city’s journey with the words, “I come from hope, I come from Bradford”.

Iqra was one of a group of pupils tasked by their teacher to write a poem summing up their feelings for this most misunderstood of places, that outlined what was important to them, and what their hopes were for the future. The results resonated with those from many different backgrounds, with shared sentiments about Bradford.

Young people said they were tired of the way people talked about their city, and that the established narratives didn’t reflect their lived experiences or ambitions. The Bradford of industrial boom and bust, of dereliction and decay, of tension and disharmony, was unrecognisable to them.

They talked instead about food and friendships, about opportunities and entrepreneurship, and about a pride of place. This sense of optimism, hope and the desire to tell Bradford’s stories the way we want to tell them became the foundation of our bid over the last two years.

Iqra’s quote now takes pride of place at the top of the Bradford 2025 bid document, setting the tone for a submission that is distinctively by Bradford and of Bradford. Over 10,000 individuals have been involved in the bid  – whether by attending one of our public engagement events hosted in every corner of the district or being part of our voluntary steering and advisory group. The result is a proposition that is as honest, authentic and understated as the city it represents

What’s so special about Bradford?

When we talk about Bradford we are referring to a vast district of great contradictions – from the brooding and tranquil moors above Haworth, Keighley and Ilkley, to the Victorian metropolis of BD1 where you’re greeted by the most stunning architecture on every street. Our district is steeped in heritage and pioneering history, yet now proudly boasts being home to one of the youngest populations in Europe with over 20% of our population aged under 24.

Bradford is rightly renowned for diversity, a diversity that is sophisticated and at times complex – something that a City of Culture year will celebrate every single day of 2025 and beyond. This place is an extraordinary breeding ground for artistic talent too, something noted many decades ago by one of our most famous sons J B Priestley, who is now joined by the likes of Daniel Lee, Madani Younis, Anita Rani, Zayn Malik, A A Dhand, Dynamo, and Bad Boy Chiller crew - all alumni of Bradford’s creative world.

That spirit of creativity emerging from unexpected corners is a common theme in our bid. There is a quiet genius and a soft power to Bradford that makes it one of the most enchanting places in the world, which may also explain why we are home to two UNESCO Creative Cities designations, and why Channel 4 recently chose this region to set up their new northern HQ. It’s not uncommon to be told by someone that they came to Bradford for five days and ended up staying for 50 years.

Not a slogan, a demand

We want to tell this story – our story – our way. When we settled on the tagline ‘Our Time, Our Place’, we did so with our young people in mind. As part of our longlisting journey, we took 100 young Bradfordians to the current UK City of Culture, Coventry, to get a feel for what the title could do for their city.

The excitement of this young cohort was palpable. I saw their eyes widen and ideas begin to germinate as they immersed themselves in Coventry’s culture and think about what winning City of Culture 2025 could mean for Bradford. As we enjoyed an installation in Coventry cathedral and talked about what a Bradford equivalent might look like, one of the young people asked me, “But what if we don’t get it?”

It was a grounding moment, and one which underlined the importance of being able to deliver this designation for the young people of this district who have invested so much in shaping our bid. For them, ‘Our Time, Our Place’ is not just a nice slogan, it is nothing short of a demand. They are hungry for change, they are full of hope, and they demand that Bradford is given the recognition it deserves.

Shanaz Gulzar is an artist and TV Presenter and Chair of Bradford 2025.

‘Our Time, Our Place’