Adding a seventh city to the longlist of bidders who will receive funding would allow more places to "complete their journey," an expert on the competition says. 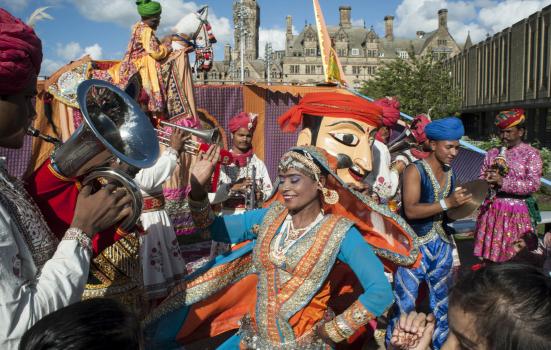 Bradford is already hosting events as part of its UK City of Culture 2025 bid
Photo:

The number of competitors expanded rapidly ahead of last week's deadline to submit an expression of interest. Alongside cities like Bradford, Southampton and Medway which have been building their bids for years, several cities and collectives of neighbouring towns made a last minute bid, including Bangor, Wolverhampton, the borough of Armagh City, Banbridge and Craigavon, and the towns of Great Yarmouth, Gorleston and Lowescroft.

Others announced their intentions in recent weeks, such as Wakefield, Derby, Conwy, Newport, Durham, and Torbay and Exeter. Wrexham also said it would bid, but did not confirm to ArtsProfessional that an official expression of interest had been placed.

With so much competition, those places that are only starting the process now may find themselves at a disadvantage.

However, the ability to group towns has benefitted places like Northumberland, which had previously delayed its bid until 2029 due to budget shortages. It has now joined with the Scottish Borders, Carlisle, Cumbria, Dumfries and Galloway to create the contest's first cross-border bid.

There is also an issue of investment. Gloucestershire abandoned its bid two weeks after saying it would compete because the process was too costly.

Lancashire County Council also pulled out of its local bid shortly before the deadline, citing the £22m cost as "too great a financial risk".

Bid coordinator Lancashire 2025 submitted its case regardless, and with the support of Blackpool, Preston City, and the Blackburn with Darwen councils: "“The vision for Lancashire’s bid is so compelling... we simply could not give up on it," Chair Tony Attard said.

Applicants had just seven weeks to declare their interest after the 2025 contest was announced late in May.

Andrew Dixon, a consultant on Coventry 2021, Hull 2017, Leeds' year as European City of Culture and nine 2025 bids, suggests expanding the longlist of applicants who will each receive £40,000 to devleop their bids from six to seven.

"[It would] give those who have been working on it for the past two years time to complete the journey and give DCMS the opportunity to consider places of different sizes."

He pointed to increasing cultural capacity in places like Sunderland and Lancashire that announced their bids long ago.

"It's that journey over two or three years that's valuable."

Dixon believes the blockbuster interest in the 2025 title is "a massive success" for the DCMS.

"I think it's the success of Coventry, to be honest, that's made people realise that they can do this.

"What this has shown is that there is real demand from towns and I think it would be good to design something around that."

While all places would need investment to pull off their 2025 plans, Dixon said towns especially lack the cultural infrastructure needed for a year-long programme.

A quadriennial Town of Culture process that more celebratory than competitive might better assist these places to plan through culture, he said.

"I think it's good that they [DCMS] have opened it up to groups of towns but they have done so on a process that's designed for cities of culture."

Differences between culture in urban and rural settings must be accounted for in the bidding process, he added.

Gwynedd Council Leader Dyfrig Siencyn said the bid for Bangor will celebrate its connections across Wales and the UK, as well as its industrial history.

"Past cities of culture have had a very urban focus, and while Bangor is the main urban conurbation in the region, we believe that our bid can connect between urban Bangor and the surrounding rural hinterland."

Torbay and Exeter say they provide "a brilliant alternative to a one-centre cultural prize".

"Torbay and Exeter naturally complement and enhance each other, with firm roots in the natural environment, art, literature and learning," Exeter City Councillor Amal Ghusain said.

"Our people are passionate about their green and pleasant land, they are fiercely proud of their surroundings, yet celebrate the opportunity to share and develop their cultural offer and their creative skills."

Russel Griggs, Chair of South of Scotland Enterprise, said that combining the efforts of the five Borderlands partners will create "a significant and varied offering which we believe is worth telling across the country and beyond".

Dixon cautioned against picking a winner based solely on the strength of its bid.

"Some of the politicans that push bids think it's a beauty contest but that's not what the process is about."

Historically, the contest has been intended to develop cities with less cultural engagement, inbound tourism and town centre infrastructure.

Some bidders are mindful of this: Bradford, for example, says it should be City of Culture "because it presents a huge opportunity for the youngest and one of the most diverse places in the UK to reap the economic, social and cultural benefits" of the title.

Claire Whitaker, Director of Southampton's bid, said many of its communities are socially and economically deprived, and their dependence on coastal industries meant they were "uniquely affected" by the pandemic.

"We are bidding for UK City of Culture 2025 because we know we need to do more than just rebuild the old economy. We have to transform ourselves into a new creative economic powerhouse to offer real sustainable life chances to the next generation."

Most, however, are promoting the 2025 title as a way to further develop their existing strong cultural offers.

County Durham says it wants to highlight "the work that is already going on across the region to make culture accessible to all", and Conwy County Borough Council says it "already has an unrivalled reputation for delivering strong events".

A Derby City Council spokesperson said the city has "culture in its heart". It is "already working to understand" the potential benefits of culture-led regeneration.

"Through city-wide collaboration, effort and focus, Derby’s bid will act as a springboard for culture-led regeneration in the city."

A recent evaluation of the European Capital of Culture contest found limited evidence the programme transformed the host cities in the long term.

The Creative Industries Policy and Evidence Centre said the competition on which UK City of Culture is modelled did not have a "large or sustained" effect on local economic growth.

Liverpool, which was European Capital of Culture in 2008, experienced small growth in employment but remains below the UK average. The image of its creative sector improved, although interviewees raised doubts about sustaining this.

Researchers said the findings were "a crucial note of caution" for future UK cities of culture, and that attention should be paid to legacy planning that fits the specific city.

"There is a need to avoid setting up standardized objectives which do not necessarily fit with the urban milieu and do not take into account the particularity of the local context."

Dixon said the UK's competition is "both unique and long term" in focus and the 2025 winner was still likely to experience economic growth.

"More recently the European City of Culture has become more artistic, more European. It's probably been awarded to significant cities [so] then the economic factor isn't as great."

An evaluation of Hull's year as City of Culture found its image improved but described the changes as "fragile".

The longlist for UK City of Culture 2025 is expected in September.