Many of the UK's highest-funded arts organisations promised change after George Floyd's death. While governance and programming has evolved, change in the ethnic diversity of their workforces is slow. 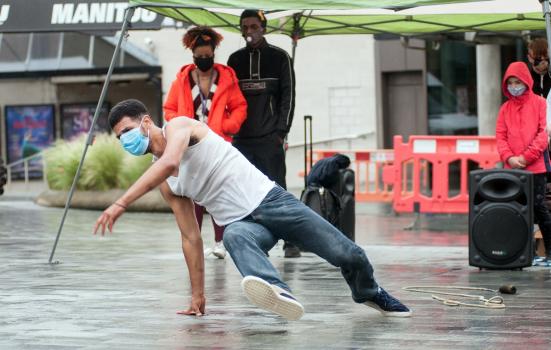 Black, Asian and ethnically diverse workers remain underrepresented at the top levels of the arts industry despite organisations' commitments to anti-racism and the Black Lives Matter movement.

One year on from George Floyd's death, new surveys - one from UK Music and another from Inc Arts - update what Arts Council England's recently released diversity statistics for 2018/19 have also shown: that while desire to diversify has never been more apparent, representation of ethnic minority staff at major institutions has barely shifted.

Inc Arts, which elicited information from 75 of the highest-funded National Portfolio Organisations (NPOs) and eight DCMS-funded sites, found 60% had posted a black square on social media in memorial to Floyd last year. Nearly 80% posted an anti-racism pledge for their organisation.

At half of the organisations surveyed by Inc Arts last month, 95% or more of staff were White. Of that group, 46% had not made any progress on diversifying their staff profile in the past year.

Yet most of these organisations (60%) received a 'strong' rating from Arts Council England for their diversity, raising questions about what the ratings actually signify.

Inc Arts said it wanted to see whether there was any "substance to the symbolism" of posting a black square, and was pleased with the changes.

"The actions being taken are meaningful, practical and significant. What we saw was that organisations have been doing more. The change is collaborative and responds to the testimonies and experiences of people who have experienced racism.

"However, these are just plans and first steps, and action is just beginning."

Inertia at the top

Despite their commitments, organisations have made little progress on diversifying staff, especially among senior management.

Black, Asian and ethnic minority music professionals held just one in five top jobs despite accounting for one third of new entrants to the industry, highlighting a "systemic inequality that needs to be addressed," according to UK Music Taskforce Deputy Chair Paulette Long.

"There is a lot of hard work ahead of us that needs to be focused and continuous, in order to get a deeper understanding of underlying issues and really make an impact.

"Only those committed to this journey will make headway in bringing down those barriers."

Covid-19's effect on diversity in hiring has been twofold: while the lockdowns gave organisations time to reflect on unconscious biases in their policies and practices, furlough, spending cuts and other budget pressures have contributed to the interia in senior teams.

In Inc Arts' survey, ethnic diversity at 13% of organisations actually decreased in the past year, mostly due to pandemic-related redundancies.

Organisations that had to make redundancies took ethnicity into account, Inc Arts says, and have found "creative ways" to retain diversity, for example through the freelancers they contract.

"They were aware of the disproportionate effects that widespread redundancies have on ethnically diverse workers and tried to mitigate this."

UK Music says it will help its members report on their ethnic pay gap next.

It is part of the group's 10 point plan for diversity to hold the indsutry accountable to substantive change rather than token gestures.

Ammo Talwar, Chair of UK Music's diversity taskforce, said its findings were significant because the organisation retired the "outdated and disrespectful" term 'BAME', allowing for more specific data on different ethnic groups - one of the ten points. It also wants members to commit funding to ensure diverse hiring, increase ethnic and gender diversity among senior management and improve diversity at the board level.

Inc Arts, welcoming improvements in these areas, has cautioned that creative sector board positions, where the increase in ethnic diversity is most prominent, are often unpaid.

"Racism takes a financial and material toll on professionals in the sector, and we must recognise our ethnically diverse cohort with the security and stability of paid roles."

It says NPOs have generally "made a more holistic commitment to inclusion" than DCMS' sponsored museums and galleries, which have demonstrated less public commitment to anti-racism but are "embarking on this action in private".

"Action has shifted from top-down decisions to a collective effort of solidarity."