Culture Recovery Fund grants are expected to save more than 10,000 roles. What happens next will determine whether the industry emerges "bruised but intact or devastated and demoralised". 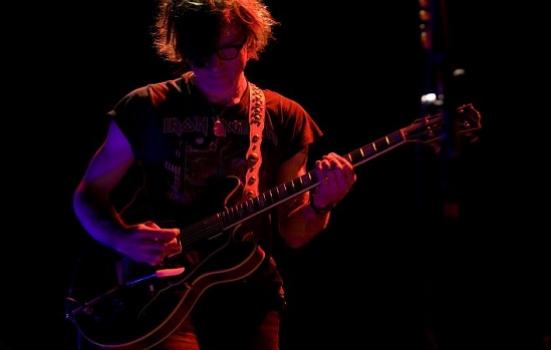 Redundancies are expected to be highest at struggling grassroots music venues, despite earlier Government support

More than 160,000 live music jobs could be lost by the end of the year, new analysis from industry leaders says.

The report from umbrella group LIVE was published after the first round of England's Culture Recovery Fund (CRF) grants under £1m, but before the second. It estimates the CRF will save about 10,000 full-time music industry roles - a quarter of jobs at the organisations that were given awards - and notes more still will be supported as higher sums are awarded and funding is put to use.

However, 15% of workers have already left the sector, industry surveys undertaken for the report suggest.

140,000 full-time freelance roles as well as 26,100 full-time employees - half of all UK live music industry postholders - were expected to be made redundant by Christmas without additional Government intervention.

The survival of the industry's other 158,000 jobs will depend on policy interventions as live events remain unviable or impermissable.

"The choices the Government makes in the coming weeks and months will to a large extent determine how this industry comes through the current crisis – bruised but intact or devastated and demoralised," the report said.

"The twin tsunamis of mass redundancies and talent drain facing the UK’s live music business will imperil any successful industry relaunch in 2021 or beyond."

Year-end redundancies are expected to be highest among grassroots music venues, which have lost 75% of their revenue since March.

Some have earned income by opening as bars or coffee shops during the lockdown period, but many are one or two person operations and most staff (71%) are on furlough. 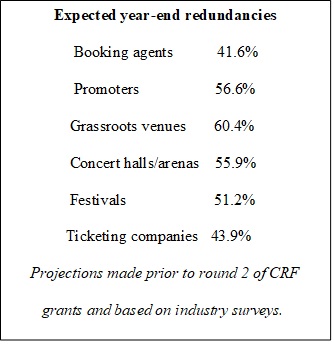 This was also true of festivals now generating "a fraction of their typical revenue" from digital festivals and socially distanced camping events, the report said, and for technical supply services, whose revenue is down 95%.

Andy Lenthall, General Manager of the Production Services Association, said the deep impact of lockdown on music technology businesses is compounded by the asset finance model that most work on.

Equipment is accumulating interest and storage rental fees while it is off the road, Lenthall said.

"This is effectively turning an industry sector that grows using managed borrowing into a rapidly developing toxic pool of debt.

"The impact of this unserviced debt will be crippling to the long-term health of the service supply sector, and that harm will again undermine the pace at which UK live music can return to strength."

Nearly three in five live music industry employees (76%) are on the furlough scheme that expires next week.

While a new, less generous Job Support Scheme will replace it, some parts of the sector are eyeing redundancies regardless.

Furlough rates have been highest in concert halls and arenas at 78.8%, where redundancies are expected to increase tenfold to 44% of full-time workers by the start of 2021.

NEC Group, which owns the National Exhibition Centre, International Convention Centre, and the Utilita Arena in Birmingham, announced plans earlier this month to cut 450 jobs, citing a need to "reduce our cost base significantly".

"Arenas are on their knees financially and sadly operators have had no other choice than to make redundancies because of the uncertainty ahead of us," National Arenas Association Chair Lucy Noble said.

"Thousands of jobs will be lost and after October we will have no real financial support. Added to that, without a date for when we can open again fully, we are unable to plan so have to prepare for the worse. Times are desperate."