Creativity, compassion, collaboration and a tendency towards efficiency meant arts workers were highly responsive in a time of crisis, councils say. 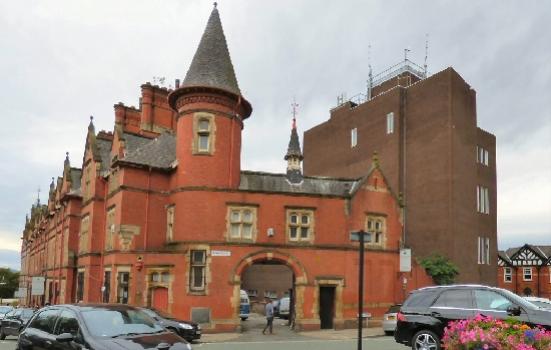 The Old Courts Arts Centre in Wigan used its skills in logistics, events management and networking to deliver food to those in need
Photo:

Arts and cultural workers' skills, knowledge and expertise were key in supporting frontline emergency responses during the first national lockdown.

Local authority arts workers provided essential health and social services alongside extended cultural offers that bridged digital divides and reached out to the most vulnerable members of their communities, a new report from the Local Government Association (LGA) says.

Cultural services drew on their existing connections and resources and acted with speed, flexibility, creativity and kindness to step up at a time of crisis in ways they had never imagined.

These conclusions underline a call from the LGA for councils make funding culture a priority despite the pandemic's pressure on their budgets: "It would be short-sighted to put culture and leisure services at the front of the list for cuts," LGA Culture, Tourism and Sport Board Chair Gerald Vernon-Jackson said.

"Spending on culture and leisure is not a luxury; it is a commitment to the wellbeing of our residents and the economic future of our local places."

Interest in local authority cultural services boomed during the first lockdown. Hackney Council, for example, attracted just as many people to its virtual Windrush festival as the physical event in 2019.

But the increase was perhaps most keenly felt by libraries, with some reporting a 600% increase in digital membership.

The number of ebooks borrowed grew fourfold and libraries loaned out an estimated 8.5 million more digital items than usual between March and August.

Cultural organisations repurposed their processes, resources and networks to contribute to local emergency responses to Covid-19.

The library service had opened a new 'MakerPlace' with two 3D printers and a laser cutter for creative family learning activities two weeks before it was forced to close. Within days, staff started using these resources to produce essential PPE for their community.

More than 60 private care homes, paramedics, schools, nurseries, council care workers and the Red Cross received the visors. "No setting waited more than two days for the delivery of visors they had requested," LGA notes.

By early August, the food parcels had been delivered to 724 households in the borough. The arts centre went on to create a second programme that made 600 welfare calls to isolated residents.

The LGA determined The Old Courts' specialism in "refining lean processes" was a defining feature of its emergency response.

Artistic Director Jonny Davenport said: "In my opinion, for the arts centre concept to work you need the basic values required to make a success of most things, which are great ideas, a commitment to hard work and above all else, kindness."

Though most of these initiatives have since ended - The Old Courts says it will continue both its programmes for as long as they're needed - "they serve as an important reminder of how responsive culture... can be in a time of crisis," LGA's report said.

"The key lesson is that creative and compassionate employees can apply existing skills, adapt thinking and respond to diverse needs."

But it also pursued an innovative creative programme, creating the lampost-based LS11 Art Gallery and hosting socially-distanced outdoor performances for families that continued after the initial lockdown.

LGA says this work "tells the story that theatre has not abandoned the public".

"People were applying their creativity to the problems at hand and... were ready to do everything they could for their community."

Slung Low's Artistic Director Alan Lane said the pandemic highlighted just how relevant and vital the organisation could be.

"There is often no one to give you permission to do what is necessary but you will find plenty who feel they are empowered to say no. Sometimes you fill the gap without permission."

LGA says the accelerated digital offer during lockdown has allowed libraries and museums in particular to "deepen existing connection and reach new audiences".

One heartwarming example came out of Ipswich Library:

"Doris Bugg, 102, takes great pleasure in audiobooks borrowed from Ipswich Library but needed what libraries also offer - a connection to others, a conversation. It was care and concern for people like Mrs Bugg that led librarians to call her for a regular chat," the report says.

"When Mrs Bugg reminisced over the phone about a novel her father read to her, staff from Suffolk Library Service bought a copy and recorded themselves reading it - especially for her."

No question of investment

The second lockdown is likely to increase the challenges to local arts and cultural provision surfaced by the first.

Vernon-Jackson of the LGA said councils must "embrace the new ambition for innovative digital solutions, while recognising that they remain out of reach for the most vulnerable".

"We must consolidate the new partnerships generated by the crisis to ensure culture and leisure is central to efforts to tackle the challenges faced by our communities. We must continue to give services permission to innovate."

Combining the digital and physical offering for communities should be a long-term priority, LGA says.

Better IT equipment and training for libraries are key for these services to maintain the level of digital provision they provided during lockdown, although more investment generally is needed because ebooks are often licensed rather than purchased outright.

But the pandemic has proven culture provides more than mere entertainment as health and social services turned to or relied on arts organisations for help.

Vernon-Jackson said: "There is an opportunity to build back better and it should not be a question of health or culture when it comes to investment. As these case studies show, the two are deeply intertwined."