Why we’re targeting behaviour over buy-in

A culture strategy based on behavioural change isn’t sexy, but it is necessary if Plymouth wants to do more than simply survive, Hannah Harris writes. 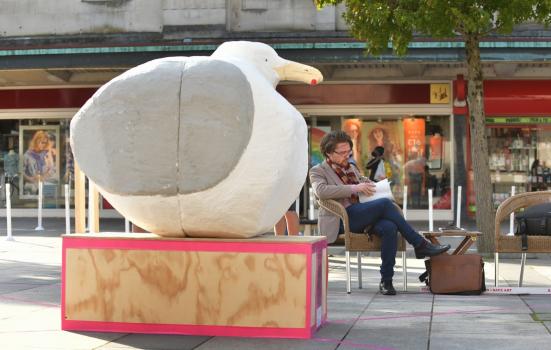 This isn’t the first time Plymouth has had to reinvent itself. The city was decimated in the World War II bomb raids, being a major target because of its royal naval dockyard. But when the city emerged from the wreckage it took a radical approach. It decided to use the opportunity to completely reimagine itself rather than simply rebuild.

The architects behind the city masterplan in 1944, Abercrombie and Watson, designed a city with purpose. They intended that your eye would be drawn to the Hoe and the sea beyond; that the grid-like formation would accommodate garden city spaces; that the white Portland stone would provide a neutral backdrop for colour to be added, and that the open, airy feel of the city would enable man-made structures to sit in harmony with nature.

There are many who don’t have a fondness for the city centre and its architecture, and that is putting it mildly! But it is a city where movement, exchange, vibrancy, and imagination have literally been designed into built and natural environments. Couple that with a population full of visionary, radical thinkers, and we have a city not only capable of imagining a new future but brave enough to realise it.

The city is poised to reimagine itself again and the development of a new culture strategy is a driving force for this. In the ten years since the first culture strategy was written, the city has seen a cultural transformation. From grassroots movements driving the development of initiatives such as the Plymouth Art Weekender to ambitious capital projects like The Box and striking public art such as Messenger and Look II, Plymouth has developed a name for itself as a culturally diverse and ambitious city.

This hasn’t happened by chance. City leaders and the cultural sector have worked tirelessly over the past decade to make the case for culture, leverage investment, and build the city’s profile. Our strategy to 2030 is not focused on making the case for culture to the city leadership; we are fortunate enough to operate in a city where the value of culture is clearly understood and widely celebrated. For culture to drive Plymouth’s transformation, the focus must be on behavioural change rather than buy in.

A strategy based on behavioural change doesn’t sound particularly sexy and is a bit of a hard sell. However, this approach is absolutely fundamental if Plymouth is to do more than simply survive Covid-19 and reimagine itself, building its identity as a pioneering, just and inclusive city.

What this means is we are evolving a strategy that doesn’t simply list the next big event or shiny new project. Instead we are starting from the position of acknowledging that we already have all the necessary assets and actors in place. We have built these over the past 10 years and what we need to do now is connect these assets and actors in a way that places culture at the heart of Plymouth. We want culture not to sit as a siloed sector, but to be embedded in cross city agendas such as city planning, health, and education. We want culture to sit in the everyday, where it is visible and accessible to communities in a way that positively affects their lives.

A behavioural shift will make this possible and ultimately drive our ability to reach our cultural ambitions. We need to move away from a culture of granting and waiting for permission – a consequence of a city dominated by the navy and public sector institutions that lead from the front – and towards stewardship and co-creation. We have modelled this approach with the development of the strategy itself by taking time to have additional workshops and conversations about the emerging themes of leadership and inclusivity. We wanted to really unpick what each stakeholder is committing to. These cannot just be generic, throwaway headings in a document; they must mean something to every stakeholder if we are to drive real change at the personal and organisational level.

We have also piloted an initiative across eight NPOs to move us on from simply sharing information to genuinely collaborating. We have pooled existing financial resources into a Cultural Investment Fund, which is seed funding projects that seek to make a difference to the sector’s future by sharing learning and scaling up initiatives.

It might not seem much but it is changing the way we work together, how we invest and what we prioritise. It is focusing us as cultural and city leaders on creating the conditions that enable creatives and communities to drive change and turn the future we imagine into a reality. It might feel risky to relinquish control but there is greater risk in not doing so. By maintaining the status quo, we risk becoming stagnant and irrelevant.

Plymouth is a city brave enough to make radical change and design its own future – we have done it before and we will again. I genuinely believe that what we are about to do could only happen in Plymouth and I am excited to see who might join us on that journey.

Hannah Harris is the CEO of Plymouth Culture

Why we’re targeting behaviour over buy-in