A seat at the table

Challenging the notion of a ‘hard-to-reach community’ in Luton, Imrana Mahmood explores the need to create pathways that lead to meaningful inclusion. 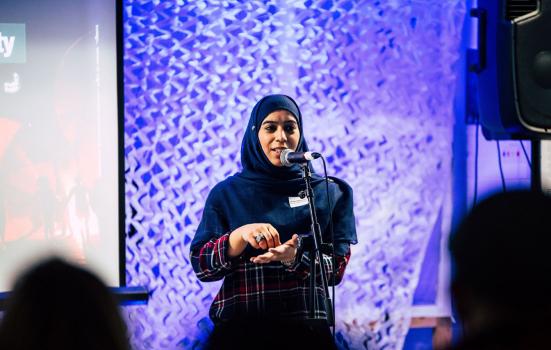 Imrana speaking at the Power of Community symposium
Photo:

As a British Muslim woman of Pakistani heritage, I grew up with an intrinsic love of the arts, including qawwali, henna, calligraphy and poetry. It was therefore a surprise to be labelled as being part of a hard-to-reach community with low arts engagement, as I struggled to reconcile the reality of my lived experience with an inaccurate perception of my identity.

Growing up as someone from a working-class background, a career in the arts was not considered to be a proper job. This was despite spending much of my spare time running community arts projects as well as having a keen interest in visual arts and live performance.

Due to the challenges faced in Luton, I wanted to produce a body of work to help counter the negative perceptions of my home town and push back on sensationalist media headlines. I was encouraged by my creative mentor and the former community activist Shabnam Shabazi at Luton’s CPP programme Revoluton Arts to apply for funding as an ‘emerging creative producer’ to turn this vision into a reality.

Initially, I was reluctant to view myself as an arts professional due to the perceived challenges and expectations, but I learnt the importance and impact of creating a sense of belonging. So I submitted my first funding application to Arts Council England for a photographic exhibition called Beyond Borders: The Art of Integration that celebrated the positive contributions of British Muslims in the UK.

It was through my initial work as a creative producer that I came to realise some of the challenges in the arts sector. I recognise the risk of being viewed through a tokenistic lens and the danger of my presence only fulfilling a diversity tick-box exercise. My very presence in traditionally white, middle-class spaces is a disruption to the status quo and the burden of representation has at times been quite overwhelming.

I do not seek to represent others although I acknowledge the responsibility associated with the work I create. This highlights the need for diverse voices and to overcome the gatekeeper mentality which currently exists. If we are truly committed to diversity, we must also dismantle current institutional power structures that oppress creatives from ethnic minority backgrounds. It is not enough to give us a seat at the table – we need to be in positions of leadership to enhance intercultural understanding and to ensure the arts promotes positive social change.

When I was first approached by Revoluton Arts it was refreshing to talk about grassroots activism in the context of my own artistic practice. As someone committed to redefining the arts scene, I spoke about authentic representation to enhance participation and accessibility, as well as enabling self-empowerment through arts engagement. I was invited to a Long Table event, a platform for under-represented voices, and it was one of the first times I felt I was not just being given a seat at the table, but that I had a voice that would be listened to.

Due to the current socio-political climate, I recognise the need for women, especially those from ethnic minority backgrounds, to have a safe space where we can be unapologetically ourselves and have freedom of self-expression on our own terms. I applied to Revoluton Arts’ Firestarter project, a creative learning and leadership programme to set up Qalam, a creative writing collective exclusively for women.

We presented our work as a series of live performances at Connors Cafe in December 2017. Being a ‘firestarter’ strengthened my commitment to grassroots artivism and I am now part of the Revoluton Arts team as the community activist with every intention to uncover and support the hidden creativity within Luton. I also recently delivered a project 'Echoes of the Diaspora: exploring the stories of British Muslim women', which was well received.

In September last year, I was invited by the CPP network to co-produce The Power of Community symposium as part of a series of national strategic events. The aim was to provide an opportunity for creatives and participants to come together to share learning and good practice. I was passionate about giving a platform to those who are committed to celebrating everyday creativity untarnished by institutional bureaucracy.

It was a privilege to work with creatives from across the country and create a space where people were able to make meaningful connections through their love of arts and culture. The feedback was positive and it reinforced the need for a bottom-up approach if we want to implement real change.

Through my creative journey, I recognise the need for more nuanced and intersectional representation within the arts. Paying lip service to diversity and only conversing with creatives of colour as though we exist as a monolith is hugely problematic. It is time that organisations committed to engaging hard-to-reach communities reflect on the reality of their own inaccessibility.

I am therefore a passionate enabler of collaborative approaches to arts engagement and am committed to supporting organisations in creating relevant and impactful work within the wider arts and cultural landscape. I am also a firm believer in the words of the Persian poet Rumi: “Let the beauty of what you love be what you do.”

Imrana Mahmood is a freelance creative producer and the Community Activist at Revoluton Arts.
www.imranamahmood.co.uk
www.revolutonarts.com/

This article, written and contributed by Creative People and Places, is part of a series exploring ways in which we can all embed inclusive engagement practices in our work.

A seat at the table