The royalties society says the rate, already more than double that levied on in-person shows, is "discounted" from a permanent rate it is yet to announce. 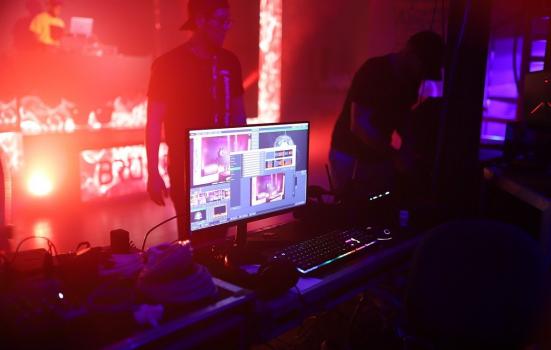 Music associations have urged PRS for Music to review its "unjustifiable" 10% tariff on live-streamed concerts, saying it will be damaging to artists who have relied on the medium during the pandemic.

The royalties society has set this interim rate following controversy over plans to impose a fee of up to 17% on the highest-earning streams and charge those performing their own original songs.

After further consultation, PRS has dropped plans to retrospectively charge for lower-earning events live-streamed in lockdown, and extended a free "discretionary" licence for members performing their own work to events earning more than £500. The discretionary licence, however, ends once full capacity live events resume.

Licence fees now range from £25 for streams earning under £500 to £125 for those with revenues of between £1,000 and £1,500. Online concerts earning up to £1,500 can accept the fixed interim fee or apply for a "bespoke" licence costing 3p per five minutes of song played.

A permanent tariff to take effect when restrictions are relaxed has not yet been announced.

PRS has described the interim rate - more than double the 4.2% tariff applied to in-person concerts - as "discounted", implying the permanent rate will be higher still.

"This discounted rate ensures that members, who have seen an 80% decline in live 2020 royalties, are fairly paid when their music is performed while also supporting the live music sector as it experiments with online concerts."

The Music Managers Forum (MMF) and Featured Artists Coalition (FAC) disagree. Acknowledging some "positive changes" at the grassroots level, the associations said the licence fee "hits those artists in the middle the hardest and certainly cannot be construed as a ‘discount.'"

They are advising artists and promoters to wait until rates are formally agreed before paying, to avoid double claims.

"We urge PRS to reconsider and come back with fair and reasonable proposals that the whole industry, including their own members, can benefit from."

PRS' consultation on the changes drew nearly 2,000 submissions, two-thirds of which said they intended to continue hosting online events once the live sector has fully reopened.

But producers and artists are making little from this now-crucial source of income: nearly three-quarters generated less than £500 per live streamed event.

Online concerts are about fan engagement above profit, submitters said, with most shows outside of the top 1% only making enough to break even.

Most submitters were PRS members. 51% said they had held, or planned to hold, an online concert compared to 54% who had their works performed by others online, suggesting most creators have lost out on potential royalty payments from live streams during lockdown.

However, a significant proportion of submissions said restrospective licence fees, which PRS is still seeking from more higher-revenue events, had not been budgeted for and that the society "should not seek to license online concerts", or at least align them with the existing 4.2% rate for live shows.

Many also said they did not want to pay to perform their own music, which PRS says it has addressed by bringing in the temporary discretionary licence.

MMF and FAC said this "completely disregards" the feedback PRS was given.

"The responses, which by PRS’s own admission were almost five times more in number than any other consultation they have carried out, make the case for a significantly discounted rate while COVID restrictions remain."

PRS says the permanent tariff will be "benchmarked" against those applied by other online video and music streaming services, but did not respond to questions about which platforms it's modelling its rates on.

The society is seeking to establish the first global performing rights licence for online concerts so direct comparisons are hard to come by.

UK music licensing company PPL has a webcast licence for online radio and simulcast that costs up to £500 + VAT for songs streamed more than 270,000 times.

The Society of European Stage Authors and Composers (SESAC) charges a minimum of $350 for its internet performance licence, while the American Society of Composers, Authors and Publishers (ASCAP) takes a maximum of 0.8% of gross ticket revenue for in-person concerts.

PRS already has a webcasting licence covering on-demand streaming, downloads and podcasts for businesses turning over less than £12,500 from the service annually. These cost between £262 and £525 per year - that's up to 4.2% of turnover, which is likely a higher percentage of profits.

The lack of clarity on benchmarking is cause for PRS to increase consultation, MMF and FAC said.