The music industry is up in arms over the licensing body’s plan to impose tariffs of up to 17% on live streaming ticketed performances. 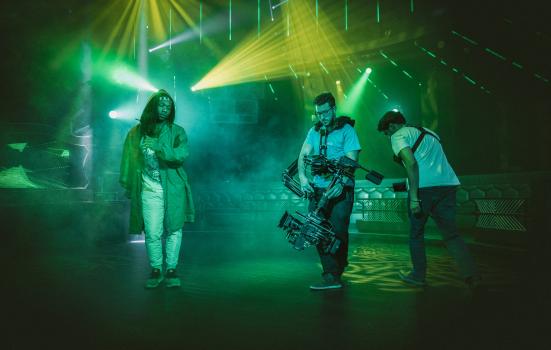 Punitive tariffs are set to be imposed on ticketed livestream events, sending shockwaves through the music industry.

PRS for Music, the body, which collects and distributes royalties on behalf of songwriters, composers and music publishers, plans to charge a cut of gross ticket receipts in return for a licence to stream live performances.

It will impose experimental tariffs that rise in line with ticket revenues. Streams that generate up to £50,000 will cost 8% of sales, with the tax climbing to 17% once income exceeds £450,000.

This higher rate is more than four times the 4.2% charged for in-person live shows.

Promoters and producers have reacted with alarm, claiming the fees make one of the industry’s sole sources of income at the moment unprofitable, and throttle innovation in livestreaming.

The tariff will be applied to all performances except those with fewer than 50 ticket sales, which will be charged a flat fee of £22.50, and those selling between 50 and 100 tickets, which pay £45.

PRS has also indicated it is considering retrospectively charging for previous live streamed events, although it refused comment further on this.

PRS for Music says its licensing committee has considered how it can license the online streaming of live performances.

Its plans were shared in great detail by its Head of Online, Nick Edwards, at a webinar hosted by English Folk Expo in November.

“The rate that we’ll be using is a progressive rate starting at 8% of ticket sales and then going up by an additional percentage point for each additional £50,000 generated up to 17% at the top end,” Edwards said.

He said PRS had worked closely with its members and promoters and producers to come up with a licensing solution to cover all live ticketed events globally.

“One of the challenges we’ve seen over the last six months is trying to find the right kind of rates for a market that typically expects and receives a 15% royalty rate for digital exploitation.

“It’s very much a non-residential, short-term trial licence while this market develops. The intention behind the approach we’re taking is to cover all events that happen in the UK and offer what’s been the holy grail for a long time, which is a blanket licence for the world.”

As a membership body for songwriters, composers and music publishers, PRS for Music undertakes collective rights management for around 30 million works, and pays its 150,000 members royalties when these are performed or played in public, broadcast on TV or radio, or streamed or downloaded.

PRS for Music declined to share any official information about the tariffs, despite clear signals they are imminent.

A spokesperson said: “There is no public information available at this stage, as conversations with our partners are still active and ongoing.”

Edwards indicated they would be published early in 2021.

Protest has grown as more industry professionals hear about the tariffs.

They say they have not been consulted and accuse PRS of creating “seemingly arbitrary terms” for the tariff.

The letter calls on the licensing body to engage industry professionals in a “transparent, open and evidence-based consultation”.

Commenting on the implications for performers, producers, crew and venues, he said: “It isn't possible for any part of our ecosystem to simply say 'well, I'm taking that much' without working with the rest of the ecosystem to see what the impact would be on others that rely on their share of the pie to make it worthwhile.”

While acknowledging that livestreams must be licensed properly, the open letter suggests the PRS move is opportunist, saying “livestreaming has presented artists with one of their few opportunities to perform and connect with their fans” during 2020 and “provided a lifeline to crew and other industry workers”.

It also raises concerns the proposals will hold back the development of livestreaming just as it starts to take off.

“For the sake of all artists, songwriters and the wider industry, it is crucial that this new format is allowed to grow and thrive. Charging artists up to 4 times the live rate strangles rather than nurtures this innovation.”

Among the larger venues that will be affected is Southbank Centre. Head of Contemporary Music, Bengi Ünsal, told ArtsProfessional she was “saddened” that the PRS proposals are being introduced with little consultation.

“The UK music industry is facing serious existential challenges as it grapples every day with how to bounce back post Covid-19… Just as we’ve started to find a workable model for streaming, these proposals could limit our chance to grow this new medium to its full potential.”

Davyd said PRS’ plans mean producers would lose more money on the songwriter’s fee than they could raise from the streaming activity.

There would be “little if any point in approximately 80% of the streaming currently taking place,” he said.

Ünsal also sees the tariff as “disproportionate” as ticket revenues from streaming are often only a third of those from live events.

Production costs for streaming may be higher than live if shows want a first-class broadcast experience.

The proposals will “place further financial burden in the hands of those who are doing their utmost to keep the live music scene alive for us all - songwriters, artists and venues,” Ünsal said.

The tariffs will be acutely felt by musicians in specialist genres such as folk, where live music is the most important income channel for artists and their teams.

Tom Besford at English Folk Expo said the cost of hosting these livestreams is normally the same or greater than promoting a live gig, and the proposed PRS tariff is “wholly out of step with the financial models needed to make any live performance work”.

Any plan to apply the tariff retrospectively would “bankrupt many promoters who have dabbled in streamed or hybrid live/online events that have already settled their show costs”, he added.

“Streaming doesn’t replace live performance, but it can maintain and increase audiences’ appetite for it.

“It’s valuable for audience development, creating a new route into orchestral music that people can access on their own terms, but it’s expensive to achieve and certainly not an income generator.

“With additional costs, it’s not clear that it will remain financially viable.”

Although its licensing activities have an impact far beyond its membership, PRS for Music is a wholly-owned subsidiary of the Performing Right Society Limited and has free rein to impose whatever tariffs it chooses on behalf of rights holders.

If industry stakeholders wish to appeal against the tariff, they must refer the matter to the Copyright Tribunal, which can adjudicate disputes between collective licensing agencies and those who believe they are being offered unreasonable terms.

They would then have to produce evidence to support their view, and PRS would defend its position.

It does not appear that PRS requires additional cash for its own operations.

Its most recent available accounts show operating costs of £101m against £811m revenue in 2019. £721m was distributed to members and affiliates of the Society.

The average remuneration of the 475 staff employed by the Society was £60,000.

Pay for its 24 non-executive directors, excluding pension contributions, amounted to £525,000.

The highest paid director received £991,000, which included £294,000 compensation for loss of office. It was the year that former CEO Robert Ashcroft stepped down after ten years in post.

An excellent piece, prescient of the furore that has raged this week, and notable for picking up on the 26th November folk talk presentation which left many viewers flabbergasted both by what was being proposed, and the very manner of the proposal: PRS seemed woefully under-prepared, self-contradictory regarding the application of new licences to certain platforms, and wholly out of touch. What isn’t apparent from watching the webinar back is the specific and detailed questioning and input via offscreen text from some of the best online promoters in the folk & grassroots sectors to have emerged during lockdown, asking for illustrations of what would pertain to their own events, PRS’s response to calculations that showed the devastating effect on event viability, and to requests for meaningful consultation. I felt at the time it was an extraordinary and significant development, and well done for highlighting it here. That PRS don’t appear to have used any further channels for announcing this is surprising: I can only assume they felt concerned over just how badly the 26th Nov event went! Not that one of the authors at least needs any introduction to the style and tactics PRS have used over decades to vary tariffs, with the confrontational approach to varying LC and LP this century being examples, necessitating costly and time consuming legal, evidence gathering, and mediation procedures by combined sector bodies, led variously by the old ABCP and the CPA, with allies, to reach a position that limits the damage to the live, non-commercial sector. PRS seem very out of touch with the extent of venues economic ecologists, other than at the simplest commercial level. With tariff LP, as well as an increase from 3% to 4.something, the scope has been extended to include secondary ticketing, after some PRS moves, successfully resisted and remaining outside the scope of tariffs, to include all secondary sales - the bar take ! Yet with the new online licences PRS have conveniently forgotten their earlier learning that secondary incomes typically significantly subsidise the performances whose primary income forms the basis for their calculation; an argument, perhaps, for a significant deduction from the ticket income before any calculation: online bar takes are zero! And dealing with all this is a new administrative requirement for online promoters. PRS deducts its own admin fees from collections before distributing to members; perhaps a further deduction from the gross ticket income before calculating PRS would be for an hour’s work by the promoter to do that paperwork, perhaps at PRS’s lead officer’s hourly rate? By my calculations, for these small scale online events, that would leave PRS owing promoters money!