A report finds that relationship dynamics regarding Arts Council England’s flagship placemaking scheme are being “partly determined by geographic and class-based inequalities”. 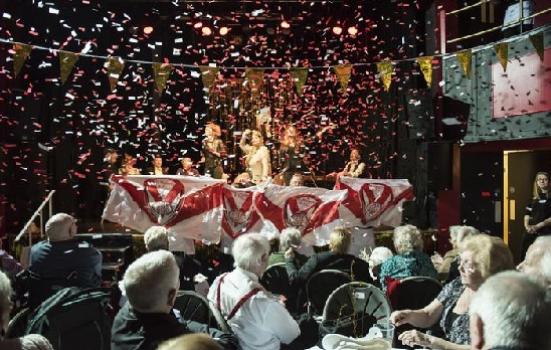 A performance delivered via Creative People and Places at Citadel Theatre in 2016
Photo:

Arts Council England’s (ACE) National Portfolio Organisations (NPOs) have been accused of displaying condescending attitudes towards Creative People and Places (CPP) projects and not taking their artistic work seriously, according to a new report.

Research into CPP collaborations by the Tavistock Institute, commissioned by ACE, says the tensions it found between NPOs and CPP projects reflect “deeply entrenched dynamics within the historic British class system” and antagonism about what constitutes excellence in art.

The findings come after serious concerns emerged within ACE about its new focus on ‘relevance’, with some worried that the approach would lead to “dumbing down” culture. The funder’s Deputy Chief Executive Simon Mellor had to reassure doubters that they should be “clear that the Royal Opera House is as important as Creative People and Places”.

The review examined relationships between CPP projects and NPOs that were part of their consortia or on their steering boards. It also explored attitudes between NPOs and CPP projects more broadly - including among those that were not collaborating.

It says: “Whilst CPP was designed as an ‘audience development’ programme rather than a ‘community arts’ programme, interviewees described similar power dynamics that have historically been found between artist–led and community-led arts organisations. Traditionally in the arts sector, ‘community arts’ or ‘arts development’ have been viewed as relatively low status and low priority.

“Crudely characterised, some CPPs reported the experience of some NPOs not taking their artistic products seriously and said that they felt some condescending attitudes towards them. Likewise, some NPOs felt that they were perceived as exclusive and inaccessible, and/or didn’t know about community engagement, and were therefore subject to reverse snobbery.”

Researchers also found examples of successful, in-depth collaborations where bringing NPOs’ expertise and CPPs’ community connections together created productions and practice that were, in the words of one CPP lead, “bigger than the sum of its parts”.

The potential benefits of closer collaboration are identified as wider engagement, local pride, once-in-a-lifetime experiences, and a “cascade impact” that generates more arts knowledge and activities. But the report says that “when it came to project partnerships, it appears that if either partner could deliver their engagement aims by working apart from each other, then they often would prefer to do so”.

The authors say that in the course of the research, questions were raised about whether the full potential for collaboration between CPPs and NPOs had been reached, saying: “our observation was that it has not been reached yet”.

Factors including NPOs’ geographic proximity to the CPP area – many were based in London – and their capacity to contribute to decision making and infrastructure, particularly in the early stages of the CPP’s establishment, often affected their relationships with CPPs.

“Without these types of relational connections supporting the structural factors in place, expending resources on developing NPO/CPP partnerships was rarely viewed by interviewees as a productive use of limited organisational energy,” says the report.

Concerns about conflicts of interest also stymied the development of some partnerships, and there was sometimes lack of clarity about the level of support or activity that partners should expect from each other, the research found.

“We heard of examples where CPPs could perhaps have benefited from the support, links and experience of NPOs, where there were a number of structural factors evident that could facilitate collaboration,” say the authors. “This indicates some missed opportunities and also reflects perhaps on the work involved when setting up new structures.”

The report warns against collaboration for its own sake, saying it is “best avoided” if it is undertaken purely to meet funding requirements around engagement or artistic quality.

One NPO commented that working with CPPs would help it to “tick the box” for engaging new communities.

Most CPP interviewees said they were initially encouraged by ACE regional offices to have an NPO as a partner, despite no requirement that they do so. This “highlights how behaviour is influenced by perceptions of where power lies across the overall system”, the report says.

It recommends that ACE should encourage and support organisations to make connections and share resources, but not prompt specific partnerships.

“An intervention that cajoles or requires NPOs to work in CPP areas or using approaches that they are not set up to do structurally and relationally, might not be wanted from different communities and could backfire against the aims of CPP to be community-led,” it says.

“Likewise, if CPPs are expected to become a new form of NPO, this could work against wider engagement goals.”

The report suggests that ACE establish “small pots of funding for arts organisations wanting to test new creative approaches in partnership with communities … without having to ‘prove’ [the] quality of [their] product”.

It also recommends pursuing further action research into community leadership and co-production and hosting national and regional symposia to “bring NPOS, CPPs and the wider arts sector together on a mutual footing to share experiences and knowledge”.

A spokesperson for ACE said: "This research was intended to explore the different kinds of relationships that CPPs had with our National Portfolio Organisations and better understand how these two funding programmes were connecting, collaborating and influencing each other’s practice.

We are currently considering how we move forward in light of this research and its recommendations, with our 10 year strategy and ongoing CPP funding in mind."

Heather Stradling, a Senior Researcher at the Tavistock Institute, said: "The comments around condescension were not necessarily made about those NPOs who are working in CPP areas or are active CPP partners. As well as exploring why partners in either funding stream do work with each other, we also explored why they didn’t. So the experience that people spoke of in relation to the other, might have come from actively working together but often comments such as these were given for reasons not to work together and were about those that they were not working with."