Campaigners have argued the gallery’s sponsorship deal with the oil giant breaches its ‘Ethical Fundraising Policy’, which they obtained via freedom of information. 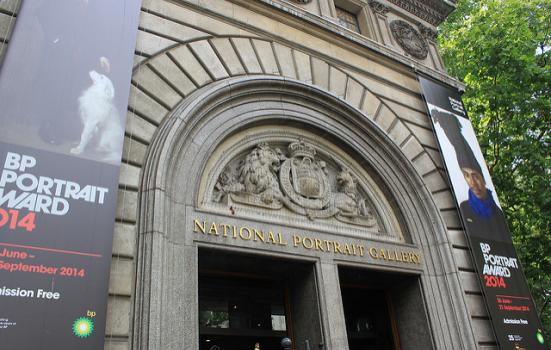 Campaigners protesting the influence of big oil in culture have issued a formal complaint to the National Portrait Gallery, alleging the institution has breached its own ethics rules in a sponsorship deal with BP.

Culture Unstained says BP’s “ties to rights-violating regimes around the world” are in direct contradiction with the gallery’s ‘Ethical Fundraising Policy’. It is encouraging the gallery to terminate its relationship with the oil giant, and warns it will submit its complaints to the Parliamentary Ombudsman if they are not adequately addressed.

“The gallery needs to explain what the purpose of having an Ethical Fundraising Policy is if you’re not willing to stand by your values and put it into action. It’s disturbing to think the gallery might have researched BP’s close ties to regimes that violate human rights and decided that’s the company it wants to keep,” campaigner Dr Chris Garrard said.

“And if they failed to subject BP to proper ethical scrutiny, then there are serious questions about whether this ill-advised sponsorship deal is legitimate at all.”

The 19-page formal complaint, issued ahead of the announcement of the winner of this year’s BP Portrait Award, is based on a close reading of the gallery’s Ethical Fundraising Policy and associated ‘Research Guidance’, which have been obtained via the freedom of information act.

Using nine case studies from around the world, an accompanying report, ‘Bad Company: BP, Human Rights and Corporate Crimes,’ highlights BP’s connections to the “notoriously repressive” Aliyev regime in Azerbaijan, and to the Indonesian government in West Papua, which is alleged to “brutally occupy West Papua” and “deny Indigenous Papuans the right to self-determination”.

The National Portrait Gallery confirmed it had received the complaint and will review and respond to it in accordance with its ‘Complaints Policy’, meaning it will “endeavour to respond” within 20 working days.

The complaint outlines how the gallery’s decision to renew its relationship with BP last year arose from a failure to follow its own decision-making process. It adds that accepting a sponsorship deal is a tacit endorsement for a sponsor’s business activity.

It advises the gallery to convene an ethics committee, with the dedicated role of scrutinising decisions where significant ethical questions are raised, and revise its Ethical Fundraising Policy in order to “restore public trust” and “protect its reputation”.

The National Portrait Gallery’s decision last July to accept a renewed five-year sponsorship deal with BP – a decision also made by the British Museum, the Royal Opera House and the Royal Shakespeare Company (RSC) – took place despite public pressure to change course. Campaign groups released a report accusing BP of interfering in the cultural institutions it sponsors and using them for “brand-washing”.

Creative protests across Europe in cultural organisations sponsored by oil companies have intensified in recent months, with campaign group ‘BP or not BP’ staging an ‘oily cashmob’ in the BP-sponsored British Museum, and Culture Unstained launching a crowdfunded alternative to the RSC’s BP-sponsored £5 ticket scheme.

Last year, BP ended long-standing relationships with Tate galleries and Edinburgh International Festival, citing a “challenging business environment”, in a move that was welcomed by campaigners.

The National Portrait Gallery is asked to respond to the complaint within 20 days, and to escalate the complaint directly to its Board of Trustees.

“If no response is received by the date specified above and/or the response provided is inadequate as it fails to address the concerns raised herein, we will be submitting complaints to the Parliamentary and Health Service Ombudsman and the Museums Association,” the report says.

“We hope that it will not be necessary for us to take this step.”