Anonymous interviews and emails obtained under Freedom of Information suggest the oil giant has some control over the creative output of the cultural organisations it sponsors. 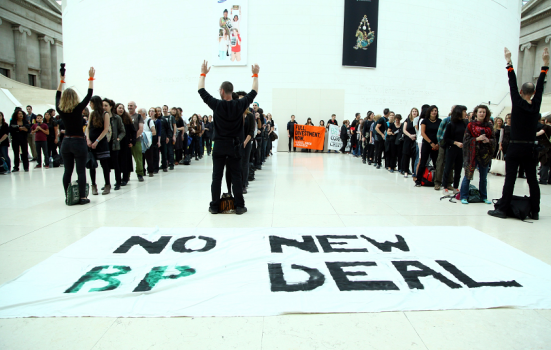 BP “interferes” in the cultural institutions it sponsors and uses them for “brand-washing”, according to a new report  by collective Art Not Oil.

It accuses BP of exploiting its sponsors for high-profile networking opportunities and includes claims by an anonymous British Museum employee that the oil giant engages in “bullying” practices.

The report, by Dr Chris Garrard of Art Not Oil – made up of campaigners such as Liberate Tate, BP or not BP? and Platform London – is based on a series of emails released under Freedom of Information (FOI) and interviews with anonymous sources. The emails suggest that BP had access to curatorial decision making, institutional security procedures and lucrative networking opportunities through its programme of cultural sponsorship.

Of particular concern to Garrard was a ‘Days of the Dead’ festival at the British Museum in autumn last year, which was funded by BP. The oil giant provided additional support for the festival – outside of its five-year sponsorship deal with the museum – which was held in partnership with the Mexican Government, attended by the Mexican Ambassador and BP officials, and came one month before bidding terms for ten deepwater and ultra-deepwater oil and gas areas in Mexico were published.

Emails also revealed that the Museum requested the Mexican embassy delete the VIP guest list once it was no longer required.

A British Museum employee told the report’s author that the festival had “nothing to do” with the Museum’s current exhibition programme and that there was “no doubt” that the project was due to the whim of a funder.

The report expresses concern about “collusion” on how to deal with protestors after representatives from the British Museum, the National Portrait Gallery, Tate and BP attended both a security meeting and a ‘counter-terrorism’ day at the oil company’s London office.

This is presented alongside apparent evidence of BP being given “decision making authority” over which paintings would be displayed in the British Museum’s Indigenous Australia exhibit. FOI requests revealed an email asking if BP had any objection to the British Museum buying a current piece of work from an artist instead of a new commission for the exhibition, and a presentation showing the Museum’s top marketing priority for the exhibition was promoting the ongoing partnership with BP.

The report comes months after BP dropped sponsorship deals with Tate and Edinburgh International Festival, a move blamed on a “challenging business environment” and the need to cut operational costs.

“In order to restore the public’s trust, these institutions must follow Tate’s lead and split with BP.”

Five-year sponsorship deals between BP and the National Portrait Gallery, the Royal Opera House and the British Museum are due to end this year.

The report is to be formally submitted to the Museums Association which will investigate to see if its official code of ethics for museums has been breached.