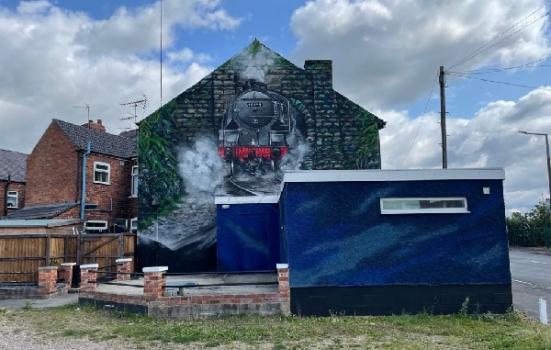 One of the murals created as part of the Greater Creative project, Blackwell

Creativity was crucial in supporting and uniting communities during the pandemic, new research says.

An evaluation of 15 local arts projects in Creative Civic Change (CCC), a partnership between Local Trust, the Calouste Gulbenkian Foundation, Esmee Fairbairn Foundation and the National Lottery Community Fund, found the activities helped neighbours feel more connected to their area and each other, boosted mental health, and encouraged creativity among many who do not consider themselves artists.

They also sustained and developed creative careers through lockdown, with local practitioners growing their confidence to manage projects, fundraise and deliver digitally.

Others attracted more attendees than they would have pre-lockdown - Whitley Bay Carnival, for example, drew 20,000 to its hybrid on/offline festival.

CCC Senior Coordinator Grace Bremner said that after 10 years operating Big Local, CCC's parent scheme, the Local Trust knows its funding model works - "but never has that been clearer than in this incredibly turbulent year".

Researchers said community-led projects were able to adapt their work to the reality of lockdown, innovating ways to engage locals that will survive beyond the pandemic.

"Each one responded with more vigour, ingenuity and compassion than ever before, and as a result, some amazing things have blossomed," Bremner commented.

"Connections and relationships were strengthened, efforts were finally noticed."

Samantha Whelan, Facilitator of CCC's Greater Creative project in Blackwell, said it was a slow process to get the ex-industrial parish to see the arts as worthy of their time: "It's the kind of place where people go to see a movie once a year at Christmas."

Tapping into the town's heritage was the key that unlocked communities' participation.

"There's still a lot of, 'yeah, Tories shut the pit down,'" Whelan said.

"Actually, now we're in our third year of having those conversations, we're seeing what an amazing community we have here, that we have all those stories."

Defunct working men's clubs have been decorated with murals, a 'Roots to Routes' map connected walking trails to local history, and performances centred around the town's railway station.

"Some of these people weren't doing anything [artistic] before so if they're signing up every school holidays, that's a big thing for them," Whelan said.

The heritage-first approach was endorsed by English Heritage Chief Executive Kate Mavor at a talk on valuing cultural assets on Monday (August 23).

She said connecting to "a common sense of humanity" creates belonging, a harbinger of wellbeing.

"That's all part of that value, giving us a sense of where we sit in society."

As well as a strong vision, good relationships with locals and flexible funding, it recommends a "diverse and connected working group" to shepherd projects (members of Greater Creative's working party are aged 15 to 76).

Facilitators should also look out for "pests": burnout, digital overload and strict deadlines can cause trouble.

Whelan said Greater Creative had to be flexible with its younger volunteers.

"Normally when they go quiet it's because they've been working 12 hours at McDonald's."

Alevroyianni and her Co-Facilitator Sarah  Sutton also said a llowing people to engage without obligation was key to Whitley Bay Carnival's success.

"For volunteers... it's really important that they do what they want when they can manage it," Sutton said.

"It's about being able to identify those small wins. Not 'we're going to have a huge carnival',    but having small stories of change in people's lives."

Whelan echoed this sentiment: "Consultation is not co-creation," she cautioned.