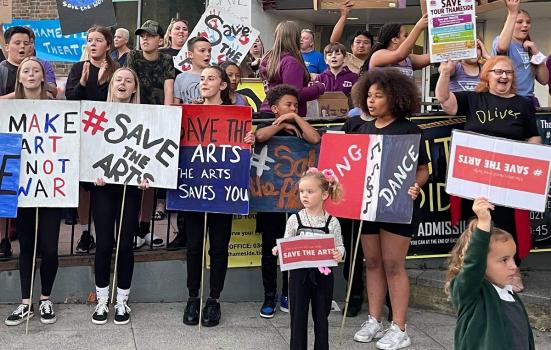 Save the Thameside Complex

The future of councils' culture services hinges on the upcoming spending review, professionals say, amid calls for £400,000 funding boost.

Council culture officers told ArtsProfessional the pressure on care, education and community support caused by Covid-19 has once again pushed non-statutory services like the arts to the margins.

Julie Russell, Arts Culture and Leisure Director at Wakefield Council and a Vice-Chair of the Chief Cultural and Leisure Officers Association (CLOA), said councils are taking "a big deep breath" before the Spending Review later this month.

As Culture Recovery Fund (CRF) grants expire, councils must make difficult decisions about what to keep and cut, Russell said.

"If we hadn't had them in some places, venues wouldn't have reopened because authorities didn't have the reserves.

"If your local authority had reserves, it was probably able to prop things up better. If it had private sector finance schemes for funding, they might be feeling more squeezed."

Already cracks are starting to appear: Thurrock Council, the recipient of a £191,000 CRF grant, is considering closing Thameside Theatre to cut costs and move towards a less building-based cultural offer.

Hampshire County Council has mooted a £3.3m cut to its arts and entertainment budget to plug an £80m shortfall (Hampshire Cultural Trust declined to comment).

And Norden Farm Arts Centre in Maidenhead is facing a 100% cut to its council grant - a harbinger of closure for the only arts venue in town.

Caroline O'Neill, also a CLOA Vice-Chair, said her council of Rhondda Cynon Taf in south Wales is investing in infrastructure and staff, in part because of the country's "envied" Wellbeing of Future Generations Act.

"I think we're all facing budget deficits over the next few years but it certainly seems in Wales that... local authorities seem to be valuing the culture and arts provision that's on offer."

Councils face different pressures depending on their location, split of services and local public health situation.

O'Neill said her area suffered one of the UK's highest death rates from Covid-19.

"That confidence to return - we're not going to reach those levels of income."

Welsh local authorities were also ineligible for second round CRF grants, meaning councils with in-house culture services missed out. They were eligible for the Local Government Hardship Fund but this only covered costs, not a loss of income.

Theatres and other performing arts centres have been hit harder because of lost ticket sales revenue.

But there are significant regional differences: venues in the south east of England have been open longer than those in the north, which reopened sooner than those in Scotland, Wales and Northern Irelnd.

Russell said smaller districts with less "wiggle room" in their council budgets are more likely to struggle to support arts activities in the coming year.

They often receive lower levels of funding from Arts Council England as well.

"In certain parts of the country you might have a squeeze in both ways, and that's really difficult to manage," Russell said.

"Not only do I have to receive my audiences and make sure we have income coming in, we may also have cuts to make."

O'Neill said authorities are used to working on a shoestring, "but they're only going to get tighter".

The LGA wants a pilot placemaking programme to incentivise growth in the creative economy.

In a supplemental to DCMS, the association says creative economy jobs "tend to be higher value, better paid and be more skilled than the average in the wider economy" - and thus key to levelling up.

Because each region has lost different elements of its cultural ecosystem, councils are best placed to coordinate the sector's recovery from Covid-19, it says.

The LGA points to the "critical" role of Heritage Action Zones, the Creative Industries Clusters programme and the "oversubscribed" Museums Estates and Development Fund in achieving this.

"We have got to be much better at [demonstrating] the impact we have on health, wellbeing, or whatever."