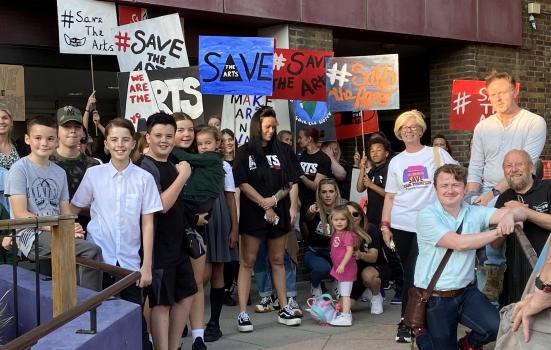 Youth have had a large part in campaigning for the theatre's retention
Photo:

Save the Thameside Complex

Campaigners fighting the potential closure of their local theatre have criticised its council owner over a lack of transparency.

Thurrock Council received a £191,000 Culture Recovery Fund grant, which it used in part to prepare Thameside Theatre for a Covid-safe reopening earlier this month.

In July, the Thameside Complex containing the theatre, city library and museum was among 30 council properties deemed "surplus to requirements" and suitable for sale.

The council says "no final decision has yet been made on the Thameside Complex" and that it is in "the very early stages" of co-producing a new cultural strategy with local residents.

But at a meeting at the theatre on Tuesday (September 28), council representatives said ushers' jobs were at risk of redundancy, raising further fears the venue will be closed.

"I think they have made their decision - they made it back in July," Sam Byrne, an organiser of the Save the Thameside Complex campaign alleged.

"If they were already contemplating the fact that they might close it, then they shouldn't have taken that Culture Recovery Fund money."

About 250 people protested outside the council offices last week when a meeting on the complex's future was due to take place. However, a leak in the building caused the meeting to be rescheduled for October 27.

Byrne said another demonstration is planned for then.

"It isn't surplus to requirements - and I think we have shown that."

Thurrock Council says it needs to revamp its cultural offer to run more effectively, "without the physical constraints of dated and frankly unsuitable buildings".

"The idea that culture, arts and heritage can only be delivered from one building... is both wrong and extremely limiting," Councillor Deborah Huelin said.

"Working closely with our community, local groups, existing and potential venues here in Thurrock, we hope to develop a new shared vision to support cultural services that are both inclusive and accessible.

"This will create a better, more diverse and community-focused offering for residents of Thurrock."

Council papers say the authority will assess cultural services' "overall social and economic contribution to regeneration" to the area.

Streaming equipment purchased for the theatre with the £191,000 grant will help extend its reach to new audiences over the next six months.

Campaigners fear promises of an 'equal or better' facility won't be kept.

The council, which is looking to boost its budget by £1m, estimates refurbishing the current theatre would cost £16m. The building's running costs are £500,000 per year.

A 2015 review of the Thameside Complex said the running costs were much lower than the council had budgeted for that year, but the building needed a "coordinated and concerted programme [of works] to bring it up to a modern standard."

While there are rumours the library will relocate to the council offices, Byrne said there is no apparent plan for the theatre and museum.

The theatre is home to youth programmes and has produced professional actors.

"They really seem to be trying to grab what belongs to the people and sell that off," Byrne said.