Many organisations won't be able to afford the replacement for the furlough system, which only gives employers a small discount on salaries and forbids redundancies. 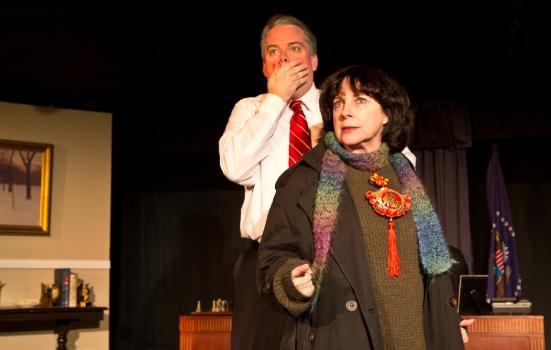 A 2011 production of November by the Hovey Players
Photo:

A new job support scheme for businesses affected by the coronavirus is cold comfort to the arts and cultural sector, as organisations on a “financial knife edge” fear it won’t be enough to save them.

Professional associations reacted strongly to Chancellor Rishi Sunak’s announcement on Thursday, equally welcoming it as a lifeline for their workforces and deriding it as insufficient to secure their futures.

The replacement to the Coronavirus Job Retention Scheme means employees receive at least 77% of their normal wages – close to the 80% they received on furlough.

But employers will bear the brunt of the costs. The Government will pay a third of hours not worked up to a cap, with employers liable for another third plus full wages for the remaining third of their hours, during which employees must work.

Ultimately, employers are liable for over 55% of wages even if employees only work 33% of their full-time hours.

As such, the Job Support Scheme is likely to deter any employers who are not confident they will be able to resume normal trading in April 2021.

The scheme will only be available to staff who are kept on the payroll for at least one-third of their normal contract. But to do so will cost employers more than a third of their salaries.

If a full-time employee works two days a week - 40% of full-time hours - they will receive 80% of their normal salary.

The employer must pay the 40% and a further 20% for one day when the employee is not working. The Government’s contribution only covers another 20% of the salary and is capped at £697.92 per month.

Government payments will be made in arrears, meaning employers must have sufficient cashflow to fund salaries until they are reimbursed.

An employee cannot be made redundant or given a redundancy notice while their employer is claiming this Government assistance for them.

The scheme starts 1st November and runs until April 2021, at which point the Government will consider raising the minimum working hours threshold.

Reducing Government support in this way“will not provide an adequate safety net” for business that cannot trade at all, ISM Chief Executive Deborah Annetts said.

Her comments were echoed by many in the sector, including Theatres Trust Director Jon Morgan, who said it won’t benefit most theatres, and cultural policy expert James Doeser, who said the scheme was “completely inadequate” for a part of the economy under extreme financial duress.

DCMS Committee Chair Julian Knight said the new intervention “still leaves many hundreds of thousands of workers” in the arts, culture and events sectors in jeopardy.

“The truth is, three times as many people in these sectors are currently on furlough than the national average, which suggests that the Job Support Scheme may not be able to stop unprecedented redundancies.”

“Many are on a financial knife edge, facing a perfect storm of continued home working, the collapse of domestic and international tourism, and now further restrictions on opening hours for at least six months.

“Many of these businesses can’t afford to keep people on even part-time, with London’s nightclubs, theatres and music venues that operate late at night unable to reopen at all. And many self-employed people reliant on sectors such as our creative industries will need more support than what the Chancellor has proposed.”

UK Music Acting CEO Tom Kiehl said the package lacked direct support for the music industry and called for “special arrangements and sector specific support” for its workforce, 72% of which is self-employed.

There is some comfort for self-employed workers who have been eligible for grants as the Self Employment Income Support Scheme (SEISS) is extended.

Those who are “continuing to actively trade but face reduced demand due to coronavirus” will receive support until the end of January 2021.

A second grant “may be available” from February to the end of April 2021, the Government says, but this could be “adjusted to respond to changing circumstances” and less favourable.

Although 2.6 million self employed people have benefitted from £13bn of SEISS support, official statistics reveal almost half of those working in the arts, entertainment and recreation sectors were ineligible, compared to just one-third of all self-employed people. 64,000 claims were made by the sector up to the end of August, with an average value of the £2,400.

The Creative Industries Federation, Theatres Trust and ISM said the eligibility for the SEISS is too narrow.

ISM called for wider criteria to support musicians: “These are dynamic entrepreneurs who will be back on their feet as soon as the sector can reopen, so any support measures need only last until the necessary safety precautions are eased,” Annetts said.

For those with tax bills to pay, a further 12-month extension has been announced. Payments due from July 2020 and January 2021 have been deferred until January 2022.

Other announcements that may benefit some arts organisations include the temporary reduction of VAT to 5%, which has been extended until April next year.

And those who chose to defer payment of their VAT bills are now able to pay in smaller, interest-free monthly instalments throughout 2021/22.

For those who took out a Bounce Back Loan of up to £50,000, a new more flexible repayment system has been introduced, extending the length of the loan from six years to ten, with interest-only periods of up to six months and payment holidays available.

Similarly, loans from the Coronavirus Business Interruption Loan Scheme can be extended from a maximum of six years to ten years.