Artists and creatives stand on the brink of financial disaster following announcements that the Government’s Culture Recovery Fund will be ringfenced for organisations at imminent risk of failure. 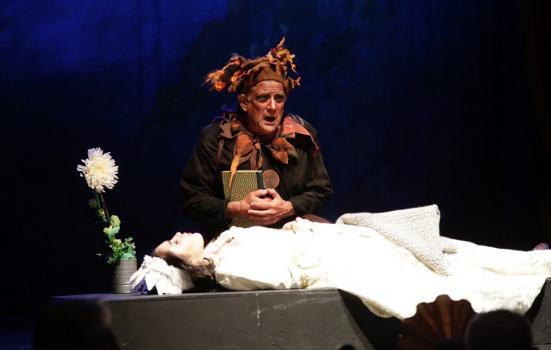 A Christmas panto of Snow White at Throckmorton Theatre in 2017
Photo:

Freelancers have hit out at claims by “the great and the good” that the Government’s Culture Recovery Fund will make a big difference across the cultural sector, saying “we were standing on a precipice – we have just been pushed over the edge”.

The £500m being distributed by Arts Council England (ACE) will be used solely to support organisations of “international, national or local significance” that were financially sustainable before Covid-19 but are now at imminent risk of failure, having exhausted all other options.

Sir Damon Buffini, Chair of the Culture Recovery Board, which is overseeing the distribution of the entire £1.57 billion, said: “The Board will work hard to ensure funding gets to much-loved organisations across the cultural, heritage and creative sectors. By protecting organisations large and small, and where possible, enabling organisations to once again create and welcome audiences and visitors, this funding will make a big difference across the cultural sector.”

But the group Freelancers Make Theatre Work described the figure for the arts as “pitiful”. They said that “despite the Government acknowledging both the scale and the gravity of the effects of the pandemic on our workforce and being encouraged by their own MPs and civil servants to ensure the freelance workers are given financial help, they have chosen to do nothing.”

With freelance workers ineligible to apply for direct financial support, and the Self-Employment Income Support Scheme (SEISS) ending soon, the group envisages subsidised companies “will have to work out ways to limp through and protect small numbers of their permanent workforce” as huge numbers of freelancers seek employment in other industries or turn to unemployment benefits.

Freelancers Make Theatre Work will be reaching out to artistic directors “to remind them that, in order for the wider sector to survive, the responsibility towards freelancers must belong to everyone”.

“Their decisions over the coming months will hugely affect the larger ecology.”

Concerns that grants to organisations fail to provide adequate support for the entire arts ecology have long been recognised by the Arts Council. Last year Deputy Chief Executive Simon Mellor said trickle down funding doesn’t work for many artists, and therefore routing funding through organisations is “not a very effective way of supporting the development of independent artists”.

ACE has recently announced plans to invest more heavily in freelancers, with a five-fold funding increase to Developing Your Creative Practice, its programme for individuals, and a target to allocate 50% of project grants under £15,000 to individual creatives.

Unions and umbrella bodies are also expressing concerns about whether any of the money will trickle down to artists and creatives. Naomi Pohl, Deputy General Secretary of the Musicians’ Union said: “Naturally, we are very concerned about the exclusion of individuals and how the funding will filter down to its members. We hope the funding will not only sustain the infrastructure of the industry but protect jobs and support freelancers.”

This concern is echoed by the Incorporated Society of Musicians, whose Chief Executive Deborah Annetts pointed out that new guidance suggests some venues may not re-open until March 2021, six months after the SEISS ends. She said “there is still no plan for long-term financial support for freelancers, who make up most of the music sector workforce”.

“With the number of live performances likely to remain extremely low for the rest of the year, freelancers will be without sufficient work opportunities while also being deprived of government support.

“This must be tackled head on, by extending SEISS until at least the end of the year. Otherwise we risk an exodus of talent and serious damage to the health of the music sector.”

Annetts’ comments follow Culture Secretary Oliver Dowden’s announcement that the Government will not set a date before November for theatres to reopen without social distancing.

This has serious implications for many theatres that will have to cancel their pantomime or Christmas show – and miss out on income that could sustain them until the end of the year.

Jon Morgan, Director of Theatres Trust, commented: “This means that more theatres will need to be supported through the government’s £1.57bn rescue package. We are pleased to see that Arts Council England’s criteria for its £500m share of the £880m grants element is broad enough to include most theatres, but we are concerned that this will not be enough to save all theatres”.

“We urge funding bodies to consider and prioritise the circumstances of theatres that rely on pantomime for a significant proportion of their turnover (as much as 40% in some cases).

“If the funds do not reach enough of these theatres, particularly with the furlough scheme ending in October, we will see more theatres closing their doors permanently.”