Exclusive: Music A level denied to ever more students

A student’s academic ability and the wealth of their parents are key indicators of the likelihood that they will get the chance to study arts subjects at A level in school, new figures reveal. 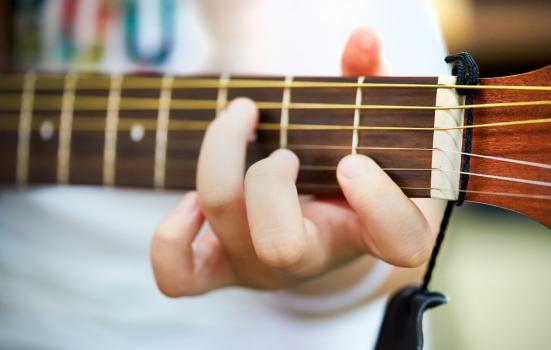 Students living in areas of highest deprivation and those studying in low-attaining schools are significantly less likely than others to be given the opportunity to take A levels in arts subjects, new figures confirm. The dramatic disparities in A level provision between schools with different student profiles are laid bare in the latest data produced by Cambridge Assessments, the examinations arm of Cambridge University.

The disparity in music is the highest of all. While A levels in music are provided by over two-thirds of schools (71%) attended by students with the highest academic performance, the same is true of only 12% of schools that are home to the least academically successful students. A clear trend shows that the higher a school’s academic achievements, the more likely it is to offer music at A level. 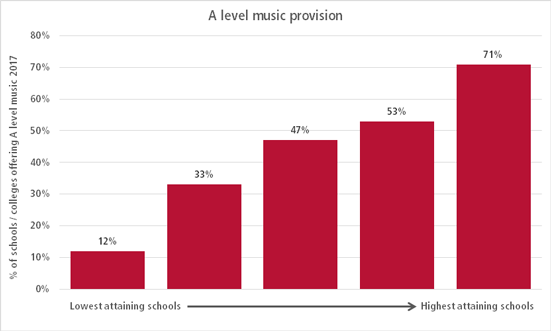 The data also chart the declining number of institutions offering A levels in music and in other arts subjects. The proportion of schools and colleges offering music at A level has fallen from over 50% to just 43% since 2013, with more than 165 schools ceasing all music A level provision during that period. 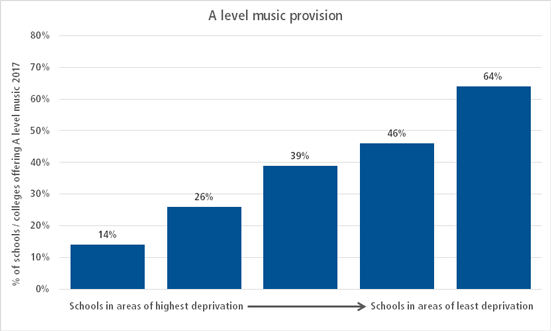 The data are drawn from the National Pupil Database maintained by the Department for Education, which records exam results for all students in all subjects in schools and colleges in England.

School attainment profiles were based on students’ UCAS point scores, and levels of deprivation were identified from the Income Deprivation Affecting Children Index, linked to students’ home postcodes.

Other arts subjects, but not all, show patterns similar to music. 63% of the highest achieving schools and colleges offer drama or theatre studies, but only 28% of those serving the lowest achievers do the same. And just 6% of institutions in areas of highest deprivation offer music technology, compared with 22% in the wealthiest areas.

But the picture is very different for art and design. This subject is offered by a quarter of schools with the lowest attainment and only marginally more (27%) in the highest achieving schools, while 33% of schools with average attainment levels offer it as an option. 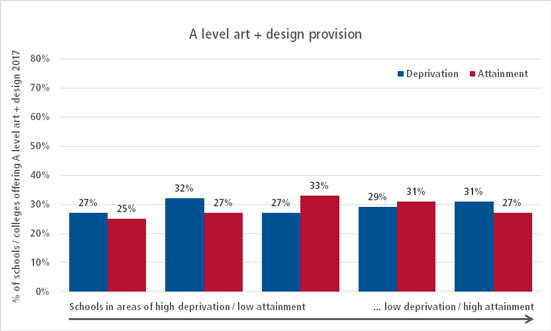 Dance shows a different pattern again. It is almost three times as likely to be delivered as an A level in schools and colleges with average attainment than in top performing institutions, where only 5% offer dance as an A level option. 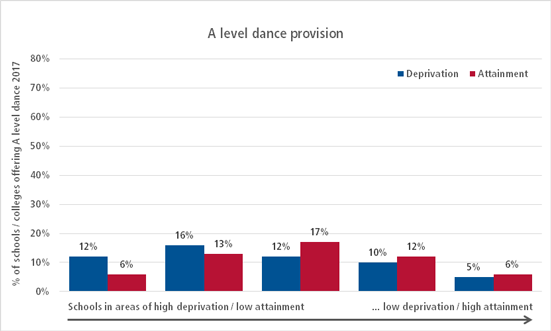 Creative & Cultural Skills, which is leading a sector-wide drive to improve workforce diversity, sees the current education system as one of the barriers to achieving this.

CEO Simon Dancey told AP: “The relationship between arts education and social class needs to be addressed holistically. This is a pattern that continues into adult life, with those from lowest socio-economic backgrounds least likely to access not just formal education but skills training too.

"Running a community music charity for ten years showed me that the potential for music and music technology to engage and empower is massive, but our education system needs radical restructuring to achieve that potential. We need to change what we value.”