Covid-19: Funders reveal plans for the survival of the sector

£11m for Scotland, £7m for Wales and £1m for Northern Ireland as their arts councils announce plans to support organisations and creative workers. 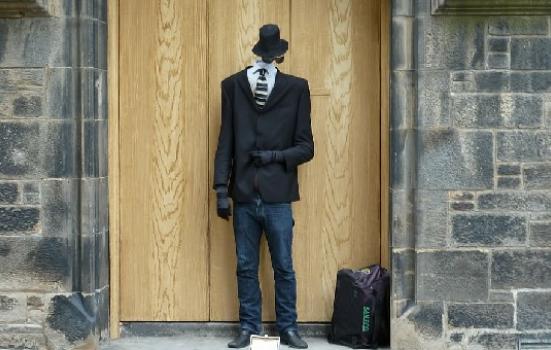 A street artist performs in Edinburgh

Outline plans for supporting the arts sector through the Covid-19 crisis are now in place across the UK.

The Scottish Government has announced a £2.2bn business relief package and is using a £20m resilience fund for charities to sustain community and social enterprise organisations, including those in the arts.

Creative Scotland Chief Executive Iain Munro said its goal is to "safeguard and sustain the sector and its work".

"Our primary focus is to keep funding flowing to sustain individuals and organisations, not only through the immediate short-term impacts, but with an eye to the medium to long term recovery required.

"These are extremely challenging times that have brought serious personal and professional impacts to artists, creative practitioners and organisations and the work they do.

"When we all emerge from this crisis, it will undoubtedly be to a changed world but one, I hope, where culture and creativity remain at the heart of the life of the nation."

She is "exploring options" to introduce a £1m Covid-19 Creative Support Fund and has directed £10,000 from a "Bread and Butter" crowdfunding campaign for struggling artists to 50 people.

The arts sector in Northern Ireland is under immense pressure at the moment and ACNI has brought forward year-end funding is expected to advance grant awards for 2020-21.

It will be introducing a "flexible and 'light touch'" Artists' Emergency Programme, with an emphasis on making a speedy response to the hardship many are under, and the programme should open by mid-April.

It has also been surveying the sector about the "financial and human impacts" of the coronavirus to aid its advocacy.

ACNI Chief Executive Roisin McDonough has posted a video message saying she and her staff are doing their utmost to bring as much support as possible, as quickly as possible to those who need it most. Her reading of the initial returns from the online survey revealed "a bleak picture", she said. "Support for Northern Ireland's hard-pressed artists and creative practitioners is absolutely essential and the Arts Council is working on a quick response to their needs.

"Flexibility and liquidity are key to the whole sector at the moment; flexibility in how funding is deployed and used this year, and the use of upfront payments and support for the sector as they manage cash flow."

A Resilience Fund to support the arts in Wales is being jointly financed by the Welsh Government and Arts Council of Wales (ACW). The £7m fund will cover both individuals and organisations and will be managed by ACW, though full details won't be published until next week.

ACW Chair Phil George said they are committed to doing "everything possible to ensure that artists and arts organisations survive and regain their position at the heart of Wales’s culture and well‑being”. The funding will target those who are at the most urgent risk, to address immediate financial crisis and hardship.

ACW has relaxed funding requirements for organisations and individuals who have grant funding in place, so they can "respond flexibly to the new challenges that they face." It is now "working round the clock to finalise the practical detail" which will be announced on 7th April.

Nick Capaldi, Chief Executive of Arts Council of Wales, said: "Our immediate task is to ensure that the opportunities offered by this unprecedented range of support are clear and easily understood... We know that those working in the arts are anxious for firm detail, but we hope that they’ll feel that the arts in Wales are best served by taking a day or two longer to get this right.”

Some additional information about the Arts Council England's plans has been published following its announcement last week of a £160m Emergency Response Package.

£50m will be made available to organisations that don't receive regular funding, including those who have applied to National Lottery Project Grants.e're making £20m is available for individuals "so they can better sustain themselves, and their work, in the coming months". Plans for the remaining £90m, earmarked for its National Portfolio Organisations, will be revealed next week.

Applications to its normal funding streams have been suspended. ACE said "While we know this will be deeply disappointing to applicants, we think the vast majority of applications could not be delivered in the current crisis so it would not be a good use of public money to proceed. We believe we need to refocus that money to help individuals and organisations to get through the coming months."

ACE has also delayed the delivery plan for its new strategy, initially due in spring, until later this year.

This article was updated on 3rd April to reflect the latest news.