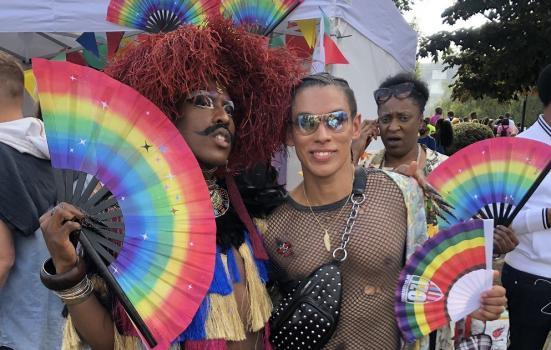 Data supplied under freedom of information laws shows that BME- and disabled-led organisations were significantly more likely to fall at the first hurdle of application in 2018/19, being judged ‘ineligible’ by ACE before their applications could be assessed in detail.

If they passed the eligibility threshold, these types of organisation were then more likely to be successful than average at the full assessment stage. But when all applications are considered, they still had lower success rates.

The diverse-led organisations are defined as those where more than half the board and senior management team are BME, disabled, female or LGBT, as well as those that self-define as being diverse-led based on who makes their key strategic decisions.

Almost half (49%) of all ineligible applications were deemed “underdeveloped” in relation to ACE’s four criteria of quality, public engagement, finance and management. The rate was higher for BME-led (52%) and disability-led organisations (54%).

The next most common reason (16%) was for income to appear to exceed expenditure in the projects’ budgets. Applications from diverse-led groups in 2018/19 were more likely than average to be found ineligible on these grounds. This was particularly the case for disabled-led (20%) and LGBT-led (23%) organisations.

Disabled-led applications were also more likely than average to be found ineligible for not focusing on supported artforms or disciplines, with 14% falling short for this reason.

LGBT-led organisations were 25% more likely than average to receive grants in 2018/19: 58% of those applying for Project Grants were offered funding, compared to 46% of all organisations.

ACE said it could not speculate on whether the success of LGBT-led organisations last year was linked to this year’s Pride Jubilee celebrations. The funder can take up to 12 weeks make decisions on Project Grants, meaning many applications aligned with this year’s 50th anniversary commemoration of the Stonewall riots could have fallen within the 2018/19 period.

ACE’s diversity lead Abid Hussain said that events with a particular focus such as Black History Month or gender rights anniversaries could lead to a spike in applications from particular types of organisation at certain times.

However, Hussain stressed that a spike in applications from certain types of group may actually lead to a higher ineligibility rate, because of the inexperience of new applicants: “Sometimes you may get applicants who may not normally do arts activity, but feel there’s an opportunity to do it. But if they’ve not spoken to somebody they may miss something in the guidance.”

Commenting on the results overall, Hussain said: “The key drivers for ineligibility tend to be the same across the board, but you do see a variance across different protected characteristic groups”.

He suggested there could be a specific reason why disabled-led organisations were more likely to be found ineligible on budgeting grounds. ACE offers to pay for access costs on top of the grant amount – but if this is not included in the right part of the form, it could lead to budgets apparently not balancing.

ACE said it would be difficult to provide robust data to confirm whether or not this was the case.

The funder did not offer any specific explanations for why applications from disabled-led and BME-led organisations were more likely to be underdeveloped.

However, the relatively high ineligibility rate for BME-led applications was discussed at a meeting of ACE’s London Area Council in February. Minutes show that attendees “asked about unconscious bias and differing ideas about what constituted art and culture”.

Area Council Chair Joyce Wilson “explained that one of the balancing criteria is diversity. If two applications are of equal merit then we choose the one which best reflects our diversity goal”.

Recently-published research into ACE’s reputation as an employer found a perception of barriers that were marginalising people with protected characteristics. “Some respondents from black artists groups described feeling frustrated that the gatekeeping and agenda setting role that Arts Council England plays defines what is funded and serves to keep black arts marginalised; and controls who is seen as suitable for employment in decision-making roles and thus reinforces existing stereotypes and power differentials,” said the report by the Institute for Employment Studies.

Other people interviewed “believed that there were many barriers preventing disabled people from having a more prominent position in the sector through failing to provide the necessary access to flexible working arrangements or reasonable adjustments that disabled people may require in order to take up employment or pursue their art”.

But a spokesperson for ACE told AP that the organisation did not think that unconscious bias played a part in the disparities found in Project Grants eligibility.

A spokesperson said: “Reasons for ineligibility do not relate to diversity, and the two most common are the same regardless of whether [an application] is from a diverse-led or non-diverse led organisation. It is impossible to do more than speculate as to why diverse-led organisations are slightly more likely to be deemed ineligible because of those reasons”.

They continued: “Diversity data is not considered when applications are checked for eligibility, so we do not think unconscious bias is playing a role. However, as an organisation we recognise the importance of tackling unconscious bias – this is particularly important to consider when eligible applications are being reviewed by panels – and have rolled out training on this for all staff.”

Asked whether the application process might throw up unintentional barriers to certain groups – for example on whether the ‘quality’ criteria favours certain genres of creative work – ACE’s spokesperson said: “When determining if a Project Grant application is eligible we do not make value judgements on the information provided as part of the ‘quality’ element of the application form…This is about the level of information provided, not the quality of the project.”

Hussain said that ACE regularly reviewed the advice it provided to potential applicants, saying: “What we can do and do frequently do is look at the advice and information available on applying to project grants – being very clear about what people can apply for”.

He said that the funder also offered the opportunity for applicants from under-represented groups to receive advice and support through a helpline, and through ACE staff attending funding roadshows and events.

ACE’s spokesperson added: “We regularly review whether there are disproportionate ineligibility or success rates in relation to diversity over time, using this information to inform our advice-giving strategy. We are committed to ensuring our funding programmes are accessible and have taken further steps to ensure applicants have a clear understanding of the eligibility criteria for Project Grants, including the introduction of an online tool to support people thinking about applying and new guidance information sheets.”

Take action and let us in
How to… successfully apply for a Grants for the Arts award
Arts Council will ‘push NPOs hard’ to collect diversity data
ACE pledges £1.5m to grassroots music venues