Survival of the fittest? Recovery forecast assumes a third of arts businesses will fail

ACE has welcomed projections that the sector will recover to pre-Covid levels by 2022. The “bounce back” relies on only the most economically productive organisations surviving. 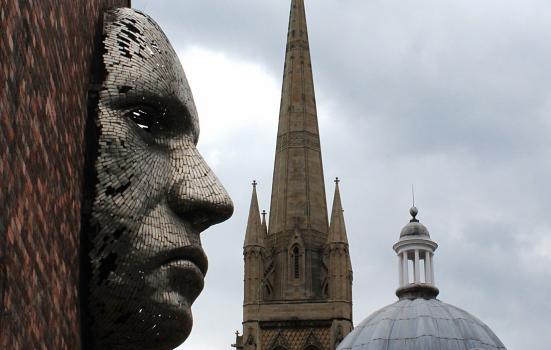 Lincoln Drill Hall, pictured, will close. CEBR's optimistic projections of the sector's recovery rely on it being much smaller than it is now

An optimistic projection of the cultural sector’s rapid financial recovery relies on half of all organisations currently ‘at risk of closure’ failing, and investment being directed only to those that survive.

A new Centre for Economic and Business Research (CEBR) report commissioned by Arts Council England (ACE) predicts around one third of arts businesses won't survive, another third won’t need financial support, and the rest need a cash injection now to start contributing to the economy again in 2021.

Delivery of the Culture Recovery Fund to arts organisations has been delayed until next week amid suggestions from politicians that arts workers may need to look for employment elsewhere: “I can’t pretend that everyone can do exactly the same job that they were doing at the beginning of this crisis,” Chancellor Rishi Sunak said when asked by ITV how he was protecting the cultural sector.

Sunak also said unemployment in the arts was “likely to increase” and that “everyone is having to find new ways to adapt and adjust to the new reality”.

His comments were poorly received by many. Notable figures including author Ian Rankin and actor Daniel Mays spoke out against what they viewed as a devaluing of creative professions.

The CEBR report assumes that “approximately 30% of firms (cultural organisations) which would have otherwise been lost will be aided and supported” by ACE’s £825m cut of the £1.57bn Cultural Recovery Fund.

Targeting investment in this way and accepting the loss of non-viable business would speed up the sector’s recovery by two years, according to CEBR analysts.

ACE said Culture Recovery Fund grants decisions will not be influenced by this research, although the fund is “only able to support organisations that were financially viable before Covid-19”.

The primary aim of the Culture Recovery Fund for the arts is to “sustain the viability of businesses that were not in financial difficulty prior to the pandemic,” the report says.

This would give them an opportunity to resume business next year and make £13.5m contribution to the economy – the same as in 2018 – by 2022. Without this financial support, the sector’s gross value added (GVA) would reach pre-Covid levels in 2023.

The predictive model is based solely on GVA estimates. Essentially, this is the financial value of economic ‘outputs’ associated with the arts, such as spending on tickets and nearby hospitality, above the economic ‘inputs’ used to produce them. It takes no account of the value of social, health and wellbeing benefits from cultural activity – just the money that flows through the economy.

The broader non-financial and human impact of the loss of a significant number of arts businesses is not part of the calculation, nor is the impact on communities where those organisations are located.

As such, attempts to follow this trajectory of economic recovery would likely hamper plans to redistribute arts funding away from London, hamper the implementation of the more egalitarian aspects of ACE's 10-year strategy and impede the Government's 'levelling up' goals.

ACE and Culture Secretary Oliver Dowden welcomed the forecast as signalling “the early bounceback of normal”.

They praised the Government’s funding measures for helping the sector recover earlier than expected, despite the research’s grim assumption about its much smaller size and the fact that only £3.36m of the arts funding – a fund for supporting grassroots music venues – has been allocated thus far.

Dowden said: “Thanks to our £1.57bn Culture Recovery Fund these hugely valuable sectors will be able to build back from this crisis sooner, boosting the country’s economic recovery and more importantly, enriching people’s lives."

His words were echoed by ACE Chair Sir Nicholas Serota, who said: “By investing through the Culture Recovery Fund, the Government is helping to protect the sector, ensuring that it can bounce back more quickly and play a vital role in the national recovery as we emerge from the pandemic.”

The CEBR research found the sector has lost an estimated £3.3bn of its GVA due to Covid-19. The hardest hit subsectors are music, performing and visual arts, which together have lost £2.2bn.

The greatest impact has been in London, which generates 40% of the sector’s total GVA.

If the projection is accurate, the Culture Recovery Fund will boost the sector’s GVA by £1.4bn.

The sector is set to be worth £15.2bn to the economy by 2025, a lesser contribution than was expected before the pandemic. This is £1.7bn more than its GVA in 2018, but only £900m more than it would have generated this year without the coronavirus.