A survey of arts leaders, teachers and musicians finds composing is being sidelined, with unclear progression routes and declining confidence among aspiring young composers. 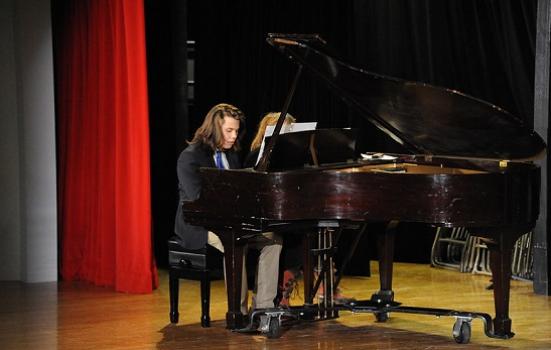 Young people's focus shifts towards performance as they age, perhaps as a result of a lack of composing in music curricula
Photo:

Young people and children are being denied the opportunity to learn music composition skills due to serious shortcomings in music education, a new report claims.

The Can Compose National Music Educators’ Survey from national new music charity Sound and Music found that, despite being widely recognised as a “key building block of music education”, composing is under-resourced in schools and often overlooked within the music education sector itself.

In her introduction to the report, Sound and Music Chief Executive Susanna Eastburn writes: “This survey of music educators, and the work we have done to analyse and understand the important information and insights that our respondents shared with us, confirms that there are serious structural deficiencies in how young people are taught to create their own music.”

Carried out between October 2018 and February 2019, the survey’s 551 respondents are made up of head teachers, CEOs of arts organisations, teachers and musicians. Between them, they reported more than 600 different barriers to young people developing composing skills.

The report describes as “particularly striking” the evidence that, as they get older, “young people’s confidence as composers dramatically falls away, with performing rather than writing their own music becoming the dominant focus”.

The report also states: “Unlike playing an instrument or singing, where there are well-established, well-understood pathways and qualifications for young people, most of which have been in place for many years, there are no consistent progression routes for young composers.”

Composing as a core part of music education is widely undervalued, it says.

“Although we have a National Curriculum for music in which composing is an integral part, 72% of all state secondary schools are academies or free schools and therefore free to develop their own music curricula which may or may not include composing music.”

It adds: “With so many respondents noting that music is being allocated less and less timetable space by schools, when educators both in schools and music education hubs have little to no obligation to make provisions for composing, and when official rhetoric all too often equates music education with learning to play an instrument or singing, national policy must be made fit for purpose in order to ensure that young people can achieve their full potential as composers.”

The report’s findings include “near unanimous consensus among respondents” regarding the central role that composing should have in music education.

97% of respondents agreed or strongly agreed that creating and composing music should be a core element of music education, yet the same percentage said there were insufficient opportunities for young people to compose their own music and that more should be available.

Some of the 21 recommendations made in the report include:

•    Young people’s music, whatever the genre, should be regularly “performed, showcased and championed”

•    Ofqual and exam boards should develop “improved criteria to assess creative composing skills”, while examiners should be supported to “develop their skills and confidence in understanding what makes for ‘good composing’”

•    Educators should have access to “appropriate resources and training” in order to explore the full range of “styles, methods and contemporary musical practices, including use of Digital Audio Workstations”

•    The needs of young composers should be “recognised and supported by key policy documents such as the next National Plan for Music Education, the National Curriculum and the forthcoming Model Music Curriculum”.

Emphasising the significance of the report and its findings, Eastburn said:
“More than ever, the creative, problem-solving and collaborative capabilities that composing uniquely requires and develops are vital for the future.”

Supporting composing in music education is essential, she added, “both in terms of ensuring that we have a new generation of talented composers contributing to the future of our culture, but also because these skills are precisely those which our young people will need in order to thrive in and navigate an increasingly complex, changing and automated world”.