The largest Paul Hamlyn Foundation grant since 2006 will provide a sustainable basis for the theatre’s ongoing work, plus money to evaluate its long-term impact. 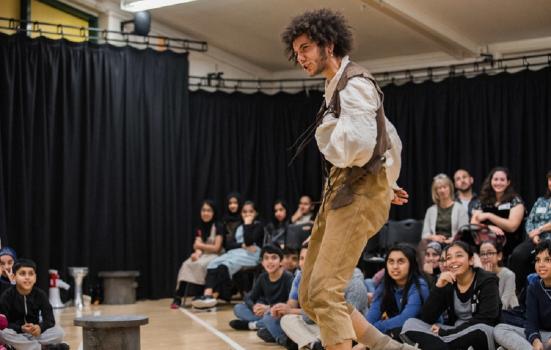 The Royal Shakespeare Company’s (RSC) education work is set to be underpinned by a £7m grant from Paul Hamlyn Foundation (PHF) – the second largest gift in the Foundation’s history.

The money will set up an endowment and the annual income that it generates will be used exclusively to support the RSC’s work with young people, teachers and schools.

A further £500k from PHF is earmarked for the RSC and its partner theatres and schools to launch a longitudinal study into the impact of theatre-based approaches to Shakespeare‘s work on children and young people.

Showing that the arts can make a difference to people’s lives is among the seven programme priorities set out in PHF’s current strategy, and the RSC research grant forms part of its mission of “gathering evidence, learning from it and sharing our findings to further understanding among others.”

RSC Education has over many years been building long-term school partnerships across the country. Using rehearsal room techniques to demystify Shakespeare, it targets schools in areas of disadvantage and young people from backgrounds currently underrepresented in the arts and cultural sector.

Activities include professional development for teachers; productions performed in local schools; free streaming of RSC productions to schools through nationwide schools’ broadcasts; and a Shakespeare Ambassadors programme for young people who want to play an arts leadership role in their schools and communities.

RSC Education see this work they do having a positive impact on the attainment, behaviour and attitudes of children and young people. They hope the research will help make the case for the value of arts-rich schools and arts-based learning, particularly for children experiencing disadvantage.

They have warmly welcomed the award, which they say will safeguard their work in schools for future generations, while also enabling them to conduct the research that could prove quantifiable positive impacts into adulthood.

Jacqui O’Hanlon, Director of RSC Education, described the endowment as “extraordinary, especially coming in the midst of the hardest professional and personal test any of us has faced.”

In it for the long-term

PHF has supported the RSC’s national education partnership programme since 2008 and CEO Moira Sinclair said they are “proud and honoured” to support its work now and in the future. She is hoping “that a long-term endowment will help to ensure the future sustainability and innovation of this programme and its continued reach out into communities across the country, especially now.”

By making such a large grant for ongoing work, PHF is delivering on its 2019 pledge to extend its commitment to long-term funding and provide a suite of funding approaches, from support for research and development through to endowments.

In 2019/20 it made five major grants to organisations totalling £14m. This included a 10-year grant worth £3m to National Museum Wales and £1m to Outside In, half of which is towards an existing endowment and a further £100,000 a year for the next 5 years.

Its biggest ever award was the £10m gifted to the Royal Opera House in 2006 to establish the Paul Hamlyn Education Fund.

A PHF spokesperson told AP: “These are significant grants to help provide long-term stability, helping to secure the future of the organisations we are supporting and crucially the communities and people they serve.”

Not all these major grants are endowments though. They continued: “We take a view about the most useful way to make the grant in conversation with the organisations we are supporting. For example, for some, an index-linked 10-year contribution to revenue has been most appreciated.”

The Foundation has recently reopened its funds with some changes to its criteria and processes, including a move away from project funding.

The spokesperson said: “We intend to continue to operate a suite of funding approaches that respond to need – our smallest grants of £15,000 support pioneers who are just starting out with ideas to change the world; our grant funding for organisations ranges from £30,000 to £500,000 and is often multi-year.

“We’ll continue to monitor needs across the sectors we support, and adapt if required.”

A few major grants will continue to be awarded at the discretion of trustees, but these are considered by invitation only.