Protesters say the funder’s draft strategy “neither addresses the urgency of the climate and ecological emergency, nor grasps the chance to trumpet boldly the pivotal role arts and culture play in bringing about societal changes”. 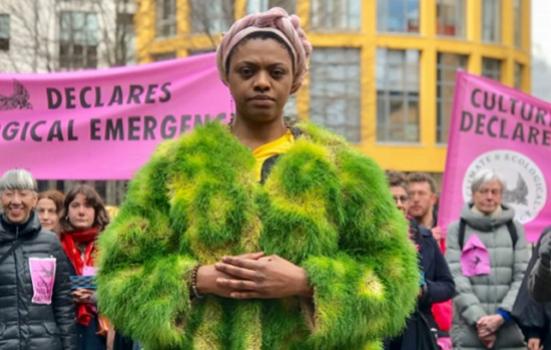 "Artists and organisations are already proving to be proactive innovators of systemic change"
Photo:

The theatre company has called time on an 8 year partnership in which BP supported its discounted tickets offer, allowing RSC to offer £5 seats to 16 to 25 year olds. In announcing the end of the sponsorship an RSC spokesperson said it "could not ignore" growing sentiment in the cultural sector, including from some of the company’s former leading ambassadors.

Its Associate Artist Sir Mark Ryalnce resigned in June in protest against the company's relationship with BP, but it appears the death knell for BP was an open letter from young activists who claimed using the discounted tickets would "help to promote a company that is actively destroying our futures by wrecking the climate".  In response, BP highlighted its activity in developing "clean energy" solutions, and shared its dismay at “attempts to exclude companies committed to making progress”.

Culture Declares Emergency, a collective of more than 200 organisations and individuals in the arts and cultural sectors, has criticised perceived shortcomings around environmental sustainability in Arts Council England’s 10 year strategy.

The document, which is out for consultation, proposes “dynamism and environmental sustainability” as one of three investment principles that would guide the council’s future funding decisions. If adopted, the strategy would require organisations to be “leading the way in addressing climate change and resource exploitation”, although it is not yet known what that involves.

A letter from the activists says the draft strategy focuses on people, communities and the country: “we note there is no sense that these are nested inside each other, nor ultimately nested inside dependence on a threatened and fragile planet.”

“In short, the strategy neither addresses the urgency of the climate and ecological emergency nor grasps the chance to trumpet boldly the pivotal role arts and culture play in bringing about societal changes needed to avert disaster. Artists and organisations are already proving to be proactive innovators of systemic change. Resources need to be allocated to support that.”

“However, in the actual detail of the consultation, this refers narrowly to organisations themselves having a reduced footprint.  It does not suggest organisations can play outward-facing civic roles as leaders on environmental challenges in their communities.”

According to the draft strategy, ACE will “help to create conditions in which the organisations that we fund are able to accelerate and measure their progress in reducing their environmental impact.

“We will support the sector through access to advice and the sharing of best practice,” it adds.

The letter says the strategy does not acknowledge the importance of ecological literacy or anticipate future threats to people’s wellbeing and lifestyles due to climate change. It further claims there is “dynamic opportunity for ACE to partner with and incentivise local authorities” to take action on the environment.

‘Core part of our strategy’

ACE agrees with the protesters that “climate change is one of the most pressing issues that we face”.

The funder did not directly address criticism of the passive phrasing of its potential strategy, but issued the following statement:

“Arts and cultural organisations are uniquely placed to shine a light on these issues, shaping conversations about the environment and advocating for action. Environmental sustainability will be a core part of our strategy over the next 10 years, and we are taking into account all the feedback received during the consultation as we finalise this.”

Culture Declares Emergency suggested this may not be enough.

“Ten years is the maximum window of opportunity we have to radically turn things around so as to avoid dangerous and potentially catastrophic and existential levels of climate change. This radical change will be led by artists and cultural practitioners whether ACE accompanies them or falls behind.”

Are we at last taking environmental issues more seriously?
Arts and culture workers join climate strike
Artists must ‘tell the truth’ about the climate emergency