The economic value of music industries reached a £5.8bn high in 2019. Then the "hammer blow" happened. 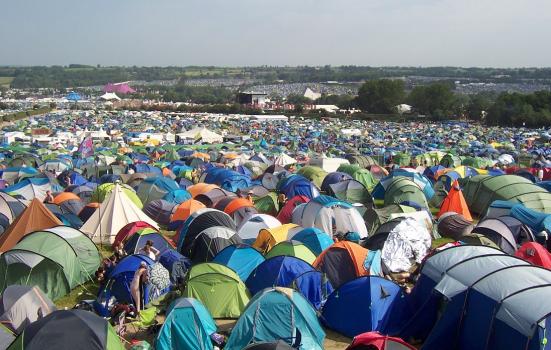 The return of Glastonbury, pictured, was responsible for a rise in festival attendance and economic contributions to south-west England in 2019.
Photo:

The live music industry's economic value is expected to fall by at least £1bn, according to UK Music.

The latest annual report by the association says the music industry contributed £5.8bn to the UK economy in 2019, an 11% increase on 2018.

It was a record year in terms of economic contributions and employment: a modest increase in employment represented more than 600 new full-time equivalent jobs, taking the total to 197,168 - an all-time high since reporting began in 2014. Exports grew by 9%, or £200m, to £2.9bn revenue.

But while the report focuses on the industry's achievements in 2019, "we cannot ignore the turbulent events of 2020," it says.

"We’ve also seen how vital music is to our wider society. The lockdowns threw into sharp focus the health benefits of music-making as activities like singing in a choir, playing in an orchestra or band were paused.

"The cancellation of gigs and festivals laid bare how reliant local economies are on music venues which bring trade to businesses from taxi firms to take-away stands," Njoku-Goodwin said.

"The UK music industry was a vibrant, fast-growing and commercially successful sector before the pandemic hit, and with the right support it can be again."

UK Music is calling for, among other measures, an extension of VAT and business rates cuts, a Government-backed reinsurance scheme for live events, income support for struggling business and artists, and a quarantine exemption for visiting performing artists.

Coronavirus has badly affected all subsectors of the music industry: recording studios, music retailers and music publishers, while more able to move their business online, have faced challenges operating through two lockdowns and with high overheads and reduced income.

Live music has perhaps been hit hardest. Behind music creators, it contributed more jobs (34,000) and pounds to the UK economy (£1.3bn) than any other music subsector.

A high number of stadium tours by big name artists like Bon Jovi, The Eagles, The Spice Girls and Take That, led to an especially successful year, the report said.

"2019 was the live industry's most successful year to date, and pre-Covid 2020 was shaping up to be even stronger.

"The music industry is interconnected and this has produced a domino effect as Covid-19 and the restrictions connected to the pandemic have taken hold," the report says.

Anthony Hamer-Hodges, Programme Leader of Music Business at London College of Creative Media, said it was important to keep an infrastructure for music venues, retail and events so the industry can return to its normal vibrant state.

"Live music will return, as will retail and hospitality where music sets the tone. For now though, many sectors of the industry are hurting and I hope further support is made available to those that need it over the next year."

Music tourism is another area in which the longer-term impacts of Covid-19 are uncertain. Spending by a record £12.6m music tourism grew by £200m, or 6%, last year.

However, tourist spend grew by 13% in 2018. Against a 14% increase in domestic music tourism, the number of international visitors dropped by 5% last year.

While UK Music notes this kind of fluctuation is not execptional - overseas visitorship grew 35% in 2016, fell 3% in 2017, and was back up by 10% in 2018 - it does raise questions about how dramatically numbers dropped this year amid global travel restrictions and whether the sector will be able to bounce back as in recent years.

Most of last year's growth was driven by international tourists, who spend nearly five times more than their domestic counterparts - £899 per person compared to £183.

That spend was highest in south-east and south-west England at an average per person spend of £553 and £528 respectively. The rise in the south west was attributed to the return of Glastonbury after a year's hiatus.

Tourist spend was lowest in north-east England at £247 per person.