Value of UK music rises to £5.2bn despite Brexit fears

Employment hits an all-time high and Britney Spears delivers a boost to the Yorkshire and Humber economy. 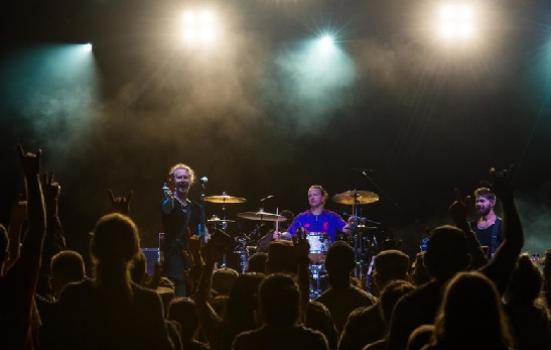 We the Kings perform in 2018. Live music and music tourism continue to be large drivers of the industry's economic impact.

The music industry contributed a record £5.2bn to the UK economy in 2018, according to research from industry body UK Music.

The reported growth in the industry’s economic value amounts to a £700m increase since 2017. This compares with annual growth of between £100m and £200m reported by UK Music in recent years.

The change in financial performance is due in part to the inclusion this year of music sectors that previous research had not included – recording studios, instrument sales, and music retail, law and accountancy – to give a “sharper and more detailed picture of the economic contribution and importance of the UK music industry”.

The report notes that this means “direct like-for-like comparisons with the data we collected in previous years are not possible”, and UK Music claims that data privacy obligations and a new methodology mean it can’t say how much of the growth arose from these new sectors, and how much was organic growth.

“It’s vitally important to realise that we understand that the success is not down to one particular sector, but the whole industry working together to deliver a massive contribution to the nation.”

Amid much discussion about the potentially devastating effect Brexit and uncertainty about Britain’s departure from the European Union could have on the UK’s music industry, the report says the total value of the nation’s music exports grew to £2.7bn (up £100m on 2017).

It is not clear exactly how much of this increase in exports is due to the research’s wider remit. However, music publishing contributed £48m more in exports in 2018 (up 8.4%) and UK label revenues grew for the third year in a row (3%).

Employment too is rising: there were nearly 191,000 full-time equivalent workers in music-related roles in 2018, 30% more than UK Music reported in 2017. While a quarter of that growth can be attributed to the addition of “music retail” this year and the number of “music representatives” grew by about 200 once lawyers and accountants were included, nearly 2,000 more people were employed in live music than in 2017.

Live music’s economic contribution also grew by about 10% to £1.1bn.

The report says that music tourism “continue[d] to be a great success story” in 2018, with a 1% increase in jobs, a 2% increase in the number of people travelling to see live shows, and a combined 25% rise in direct and indirect spending by these music tourists – a half-billion-pound boost in a single year.

But per-tourist spend was highest in South West England at an average of £473.90 followed by £471.66 in the South East and £456 per person visiting the East Midlands.

Spending in Yorkshire and Humber jumped by 21% to £388m in 2018, which the report attributed in part to a Britney Spears concert at Scarborough Open Air Theatre.