Contact Theatre says it is focussed on putting young people at the forefront of its work after the challenges of the past year. 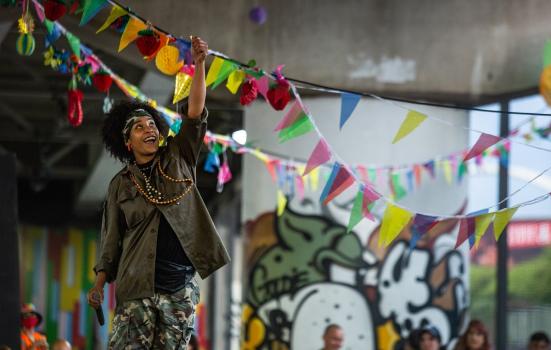 The Oxford Road venue closed in December 2017 to undertake work on new performance spaces, an arts and health development space, offices for arts organisations and a public café and bar.

Project funding came from a £3.85m Arts Council England investment, alongside grants from other supporters, trusts and foundations.

The iconic theatre's reopening is a welcome new beginning in a city whose cultural sector - one of England's most developed - has suffered badly during the pandemic.

A report by Manchester City Council in March highlighted the "extremely difficult financial position" of most local arts organisations, which the authority had initially expected to fully reopen in December.

Contact Theatre’s Chair of the Board of Trustees Junior Akinola said it was a “great feeling” to bring people back to its building.

“I believe our ambitions are limitless and I can’t wait to see how this new chapter adds to the legacy of our great building.”

The theatre will reopen to the public on September 27 for an open exhibition. Its first production, Everything All of the Time, is scheduled to begin October 6.

Chief Executive and Artistic Director Matt Fenton will direct the Contact Young Company (CYC) production, saying it "feels right" that its first show is youth-led, after the turmoil of the past year.

"We believe young people deserve the very best resources to create and imagine.

"We have also renewed our vision and mission to reflect the new reality facing our communities, and to ensure all young people are empowered by the arts and creativity.”

The theatre says it is “unique in its ethos” by placing young people’s decision making at the heart of all its operations.

The CYC ensemble is made up of performers, dancers, musicians, comedians, poets and MCs aged 15 to 25. It members act as full board members, making decisions on the theatre’s artistic programming and staff appointments.

Theatre maker Nathaniel Hall, who starred in Channel 4’s It’s a Sin earlier this year, started his career at CYC.

He says he is “over the moon” the theatre will showcase his own show, First Time, this November.

“Contact is where my journey as an artist really began.

“Their young company nurtured my talent and having access to the diverse creatives with a passion for community-led arts that inhabit the building made me into the artist I am today.”

Down but not out

During the closure it also presented Contact in the City, a year-long performance programme, and worked with youth enterprise company The Agency on its expansion.

Akinola said developing young people and the wider community are "at the hub of everything we do".

"We plan to continue our rich history in thrilling, challenging and entertaining all our audiences."