Research into gender pay gaps and the representation of Britain's female artists shows some measures of equality are moving backwards, while others are "incredibly slow" to change. 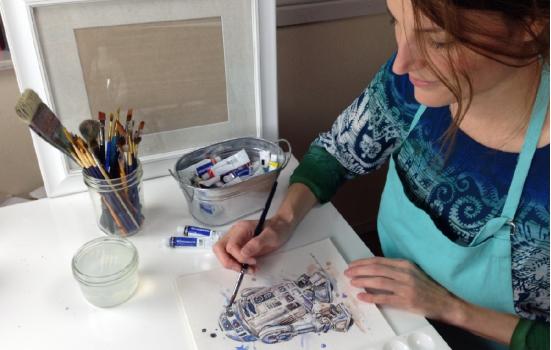 Female artists in Britain are likely to be earning less than minimum wage amid ongoing struggles for equal representation, new research says.

The gender pay gap in arts and culture is probably wider than in other sectors, Dr Kate McMillan has argued in the fifth annual Freelands Foundation report into the representation of female artists.

While there is no data on variations between the average incomes of male and female artists, applying the UK's gender pay gap of 17.3% to the average artist income of £16,150 in 2018 suggests female artists earn an average of £13,355 per year.

The report also showed "incredibly slow" progress ensuring equality for female artists. Despite some improvements in representation in national collections and commercial galleries, "this report largely serves to highlight how far there is to go in recognising and valuing the labour, creativity and endurance of female artists in Britain," McMillan wrote.

On some measures, the sector is moving backwards.

The gender ratio and gender pay gap among Art and Design staff in UK universities has worsened, and the number of solo shows by female artists in public galleries outside London and at Frieze Week in 2019, fell by 4%.

McMillan said existing inequalities will be exacerbated by Covid-19 as the pandemic narrows the number of paying jobs available and places extra pressures on primary caregivers - especially artist mothers.

"We now have a sense of urgency for the survival of our artists and cultural organisations, but most importantly, an opportunity to re-imagine what our sector should look like.

"But perhaps what is more crucial, is that we avoid a major step backwards as the impacts of Covid-19 unfold, not just for women, but for everyone whose story and whose labour has most often been rendered invisible."

'It happened to me'

At a launch of the report, McMillan described her experience of being rejected for an award because she is a mother.

"I had a letter saying, 'we don't think this is the right time for you due to your personal circumstances' when I had two young children."

Art Critic Jennifer Higgie, who contributed to McMillan's report, shared a similar story of being on a judging panel considering an award to a female artist: "A judge argued that she would be 'distracted' due to having a young child," Higgie said.

These experiences highlighted the "real polarisation between women who have children and women who don't," McMillan said, and served as a reminder that bias continues to hold sway over gatekeepers in the industry - even female ones.

Art Critic Hettie Judah said some female artists feel unable to tell their galleries when they are pregnant for fear they'll be seen as unproductive or a bad investment.

"I had been getting 10 page letters from women who saw their careers just take a complete nosedive."

Others cannot not work during lockdown because of a lack of childcare, Judah added.

More men at every level

There are more men at every level of the art industry from secondary markets through to deceased estates.

The one area in which females were more highly represented was in school, before their careers began.

Young women are attracted to the arts even though school curricula often emphasise male artists: 66% of Art and Design GCSE students in 2019 were female, as were 74% at A level.

"It's still considered a gendered subject, but ultimately the path is paved with male success," McMillan said.

Her report notes that national collections favour male artists: just 11% of the 14,411 works in the Government Art Collection are by women, as well as 28 out of 2624 works in the National Gallery.

"What we observed in many collections is that purchases and gifts by male artists often included multiple works, rather than single items, as is the case with female artists," McMillan said.

"The impact of this should not be underestimated. National institutions are far more likely to display and curate artists when they have substantial holdings of their work."

She wrote that auction houses like Sotheby's, which increased the number of female artists in its sales by just 2% last year, "continue to argue that they are bound by the market and are simply arbitrators of existing supply and demand".

"But it is the auction houses themselves that set these estimates based on historical precedent, advise collectors and continue to speculate on future values.