Setting targets helps, but wider strategies are needed to dispel the sense of novelty value that still surrounds female musicians. We need to normalise their presence on stage and behind the scenes, writes Kate Lowes. 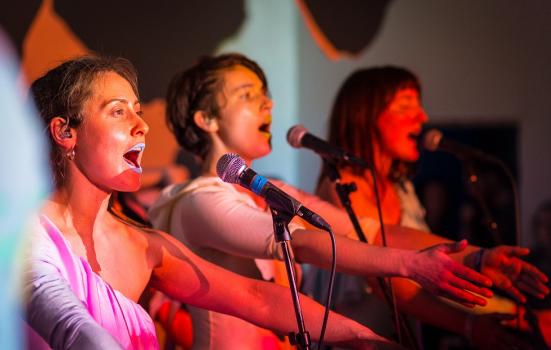 Electro-pop trio Stealing Sheep performing 'Suffragette Tribute' - created in collaboration with 15 female drummers and percussionists on a Both Sides Now residency in Liverpool in 2018.
Photo:

The topic of gender equality continues to make headlines in the music and cultural press - from festival performances, new releases and award ceremonies to live announcements for the forthcoming season. The conversation has been reanimated by recent comments surrounding the next TRNSMT festival line up and there still seem to be several layers to this issue that are being overlooked.

When we are still talking about issues such as equal rights 100 years after women won the vote and 50 years after the Equal Pay Act was passed, we have to ask ourselves deeper questions about what equality means to us as a modern society and what we are doing to truly achieve it.

The pressure on festivals has mounted since the inception of the Europe-wide KeyChange initiative and its call for festivals, venues and others to sign up to demonstrate their commitment to achieving a 50/50 gender balance in their programming by 2022. The pledge has been hugely effective in bringing this problem to the public’s attention and keeping these issues in people’s minds. It is also encouraging festival organisers and promoters to be more aware and conscious of their programming.

While quotas alone won’t make a difference, when coupled with wider strategies of affirmative action we can start to have an impact. Affirmative action, in whatever form it takes, shouldn’t be patronising but needs to be rooted in empathy and understanding with a genuine aim to create change. In this case, that means calling out the prevailing sense of novelty value surrounding female musicians to normalise their presence on stage and behind the scenes. Music is an industry based on talent and creativity and these two factors can’t be overlooked. When outdated attitudes and stereotypes continue to limit a person’s progression we have to look beyond rhetoric and ask what is the root cause of the challenges and what are the barriers to meritocracy.

Over the last two years Brighter Sound has been running a gender equality programme across the North of England called Both Sides Now. As this moves into its third year, we’ve been reflecting on the progress we have seen, but also the blocks that still stand in the way of a more gender equal music industry.

The challenges for the women we have been working with through Both Sides Now are rooted in cultural and societal barriers, experiences and perspectives. These challenges won’t disappear without people really trying to understand them and thinking creatively about ways in which they can be broken down or bypassed. This needs to start in education and extend beyond early careers. The more action that can be taken to bring about change in schools, support girls and young women, and help emerging female artists to make that step into the professional sphere, the more chance of reaching those 50/50 targets.

Through my research I have heard hundreds of personal accounts of the sexism, harassment and discrimination that women continue to face – a lack of acceptance of their capabilities; the ritualistic gender stereotyping in the live and recorded music scene that limits the diversity of female artists breaking through; and the people who preserve the glass ceiling from male-dominated positions of power. Beyond this, intersectionalist issues relating to geography, socio-economics, race, gender identity, sexual orientation and other identity markers are conversations that are rarely heard.

There are positive things happening to address these issues though, and through initiatives like Both Sides Now, She Said So network, KeyChange and many more besides, people of all genders are coming together to galvanise a movement for change. Working collaboratively, they are creating new networks, providing greater development opportunities and involving a truly diverse group of female artists.

Building on this momentum it is time to start thinking more broadly about female creativity and artistry, and to introduce new voices into the conversations that will shape our future. In response to the work Brighter Sound has been doing with Both Sides Now, we are in the process of finalising a crowd-sourced manifesto that highlights some of the legislative and attitudinal areas that need to change. The manifesto covers five main themes – education, talent development, the freelance ‘workplace’, leadership and parenthood. As we move into the next phase of this process we will be launching a series of pledges and recommendations for consideration and adoption across the music landscape, with the aim of promoting equality between women, men and gender minorities by embedding a gendered perspective into the activities, practices and policies of organisations and institutions.

The visible change that we are all anticipating won’t happen overnight, but with extensive networks of partners and artists from all areas of the music industry connecting and working towards shared goals, programmes like Both Sides Now are in a position to make a real difference.

Kate Lowes is Head of Programmes for Brighter Sound and a PhD researcher in gender equality in music.
www.brightersound.com