Dorries bites back at 'a vocal number' of her critics

The new Culture Secretary showed she won't back down easily in her first face off with committee MPs, raising claims of gender discrimination. 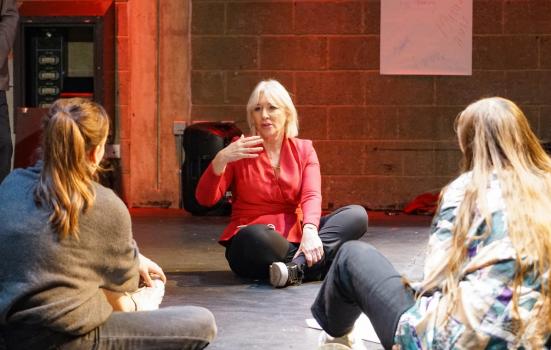 Dorries says children in her hometown can't imagine creative careers for themselves
Photo:

Left-wing male arts professionals used the new Culture Secretary's appointment "as a means of political attack," she has alleged.

"The arts sector is a pretty huge sector; I don't think they all opposed my appointment but there was certainly a vocal number, mostly - actually probabaly wholly male - who are used to and frequently comment," she said on Tuesday (November 23).

"Were they all people from the left? Yes, I think there were a number of people who sadly used my appointment as a means of political attack.

"Did that happen? Yes. And were those people quite obviously on the left? Yes."

In a session that mostly focused on Government plans for the BBC and Channel 4, Dorries was forced to defend her colourful Twitter history, including potentially defamatory comments about critical journalists.

"I'm not going to answer questions about tweets I wrote 12 years ago," she told SNP politician John Nicolson.

After pressure from committee chair Julian Knight to answer she conceded: "I do understand [the issue] in the context of my role as Secretary of State but as a female politican I do, as many female politicians do, have to respond assertively to unpleasant, aggressive tweets."

Children in her hometown cannot imagine a career for themselves in the creative industries, Dorries said.

She suggested creative professions had become less accessible in the past 40 years: "When I grew up in the 60s, someone I grew up with on my deprived council estate went on to be one of Cher's music producers."

"The kids from where I grew up now would never dream of being a journalist. They wouldn't think it was an opportunity for them.

"Theatres, to them, aren't places that they go to,. Even museums, anywhere with any element of the creative industries, they don't think are open to them as places of employment."

Addressing this is a priority for her tenure, she said.

"It's about ensuring that everybody from every background has access to the arts, whether it's theatre, it's music, whatever it is."

On the Brit Awards

Dorries also answered questions about the Brit Awards' decision to remove male and female artist categories for a gender neutral awards next year.

"I think it sounds quite a sad decision... I would like to see how that would work in terms of gender representation," Dorries said.

Told it has been done to support non-binary artists, she responded: "I can't give an opinion on that because it's the first I have heard about it."

However, she went on to suggest the change would harm women.

"If we want to look at who used to win awards for novels and many things in the past, men always dominated and my concern would be that women weren't fairly represented foing forward, so that would be my concern, the gender balance."