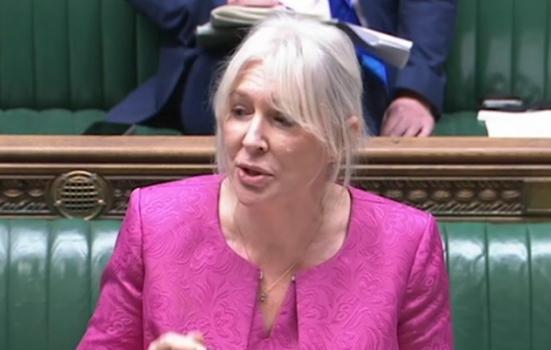 The best-selling author of badly-reviewed novels and shortlived I'm A Celebrity... Get Me Out Of Here contestant becomes the tenth person in a decade to hold the role, replacing incumbent cabinet office minister Oliver Dowden.

But the sector shouldn't expect a significantly different regime than under the so-called 'Secretary of State for Culture Wars': Dorries has taken aim at liberal "snowflakes" and the "very left wing" BBC for being "hypocritical and frequently patronising".

A former nurse who introduced a bill to restrict access to abortions, the Mid Bedfordshire MP is an ardent Brexiteer who has taken a less-than-tactful approach to issues of diversity, placing her at odds with the left-leaning sector.

SNP spokesperson Jon Nicolson was quick to point out the incongurity of her appointment.

"Now is perhaps not the time to discuss the alarming dumbing down or panto, which she identified in this once highbrow art form, or indeed to ponder her long anti-gay rights voting record - just as well there are no homosexuals in the arts sector."

Dorries, unable to give substantive answers during her first questions as Secretary of State on Thursday (September 16), instead read from a script lauding DCMS' accomplishments, including the Culture Reovery Fund and Live Events Reinsurance Scheme.

She said she was "delighted" with her new job.

"This is one of the most important departments in Government, economically, socially and culturally and I'm determined to ensure our sectors bounce back stronger than ever from Covid."

A self-proclaimed "big fan" of Winston Churchill, Dorries retweeted a Daily Mail article last week about attempts to change the name of the Winston Churchill Memorial Trust, suggesting she will support Dowden's policy on contested heritage.

Her history of right-wing rhetoric has been thoroughly examined since news of her appointment.

In a 2017 tweet, she wrote: "Left wing snowflakes are killing comedy, tearing down historic statues, removing books from universities, dumbing down panto, removing Christ from Christmas and suppressing free speech. Sadly, it must be true, history does repeat itself. It will be music next."

"Instead of an agenda of undermining much loved institutions like the BBC, National Trust and Channel 4, the Government should be celebrating an industry in which the UK is the envy of the world and putting culture and our creative workforce at the centre of our post-Covid economy.”

Lobby group Carry On Touring immediately wrote to Dorries to draw her attention to the ongoing barriers to working in the EU.

A letter signed by hundreds of sector professionals asks for "clarity, not more chaos and confusion".

But assessments of her competency were not optimistic: "She's the epitome of Boris Johnson's habit of hiring those he regards as his inferiors," The Guardian's Polly Toynbee wrote.

One Twitter commenter offered a rebuttal: "At least she's not from Oxbridge."

Loose with the truth

Dorries has a habit of doubling down before apologising.

In 2009, she defended using public money to pay for a £2,190 deposit on her flat and complained that the expenses scandal was "torture" for the implicated MPs.

In 2013, she repaid £3,000 in travel expenses after accepting they were "wrongfully made".

Dorries admitted a 2010 blog she wrote to reassure constituents she spent more time in her constituency than she actually did was "70% fiction".

"I rely heavily on poetic licence and frequently replace one place name/event/fact with another."

""It also only takes any individual with a smattering of intelligence to see that everything on the blog is accurate, because it is largely a record of real time events."

Dorries has also backed away from her opposition to same sex marriage. Five years after the fact, she said voting against its legislation was her "biggest regret as an MP".